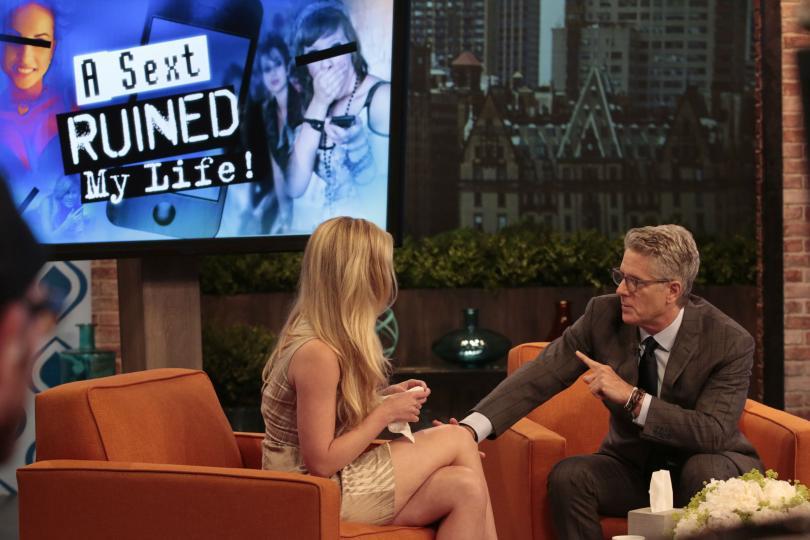 A scene from Donny Deutsch's new scripted TV series, in which he plays a talk-show host
Credit:

Donny Deutsch isn't exactly reinventing the TV ad model with his new USA Network series, "Donny!" But he does intend to prove that advertising can be just as creative and exciting as the content that viewers tuned in to watch.

That's why product integrations will be front and center when the comedy debuts next month, with Mr. Deutsch, the former adman, stopping in the midst of the episodes to sell everything from vodka to vacuum cleaners.

"This is my homage to the advertising business," said Mr. Deutsch, who plays a fictionalized version of himself. "Advertising sometimes gets pushed out as the little step brother," with movies, scripted dramas and other such content being deemed more important or artistic. But Mr. Deutsch argues that "advertising is infinitely harder."

"You have just 30-second to sell a product, engage audience and inform," he said. "It's a lot harder than a 22-minute program where the only job is to make people laugh."

Mr. Deutsch contends the integrations for brands that include Hack's BBQ Sauce, Purity Vodka, Dyson Vacuum, TracFone, Overstock.com and Tina Fey's new movie, "Sisters," are "some of the funniest parts of the content."

"I told them to give me their hard sell," he said. "The harder we sell it the funnier it is."

Aside from these integrations, the show is sold out of traditional commercial time, said Dan Lovinger, exec VP-advertising sales, NBC Universal.

While "Donny!" is not about the advertising industry and doesn't even allude to Mr. Deutsch's years as the head of the agency with his last name, product placement is arguably central to the humor of the show.

It has also become a necessity amid the seismic shift in TV viewing. As more people skip commercials and watch content on non ad-supported platforms, it has become essential for marketers to entwine their messaging into the content.

"Advertisers want to be part of show to augment commercial time," said Dan Lovinger, exec VP-advertising sales, NBC Universal. "It's not an either/or."

These viewing habits may have made even traditional integrations -- picture the Coca-Cola cups on the judges' table on "American Idol" -- less effective, because consumers expect more, Mr. Deutsch said.

"The show is indicative of what's going on in media right now: the blurring between entertainment, news, reality and advertising," Mr. Deutsch said. And the integrations are intended to be symbolic of that shift.

In the soft-scripted series, Mr. Deutsch plays a single dad and TV personality, taking a satirical look at the duality of media characters in their on-air and personal lives.

Like Mr. Deutsch's character, there's nothing subtle about the integrations. "If we are going to sell you stuff we are going to make it funny," he said, noting millennials are hyper aware they are being sold to.

While there was some initial creative debate about whether the integrations would take away from the show, Mr. Deutsch said it ultimately made creative and economic sense.

Of course, the premise of breaking the fourth wall isn't new. It's a tactic that's as old as TV itself, and has been used in recent years in shows like NBC's "The Office." But Mr. Deutsch contends that "Donny!" is unique because its integrations were part of the concept from the get-go, in his pitch for the show to USA.

"At my core I am still an advertising guy," Mr. Deutsch said. "While the show doesn't talk about my past as an adman this is my nod back. I am still a guy who likes to sell stuff."

"Who better to do it than me?" he added.

It's not a bad argument, given his experience.

"Clients had a sense of security with Donny," Mr. Lovinger said. "He understands the value of of building brands and will take the right time and approach. He is super creative and finds ways to make it organic to the show. Advertisers put a lot of trust in him."

Since the show was shot in June but the integration deals were struck during upfront negotiations in July, the product pitches were incorporated retroactively in post-production.

If "Donny!" is renewed for a second season, Mr. Deutsch said he intends to sit down with advertisers before development even starts.