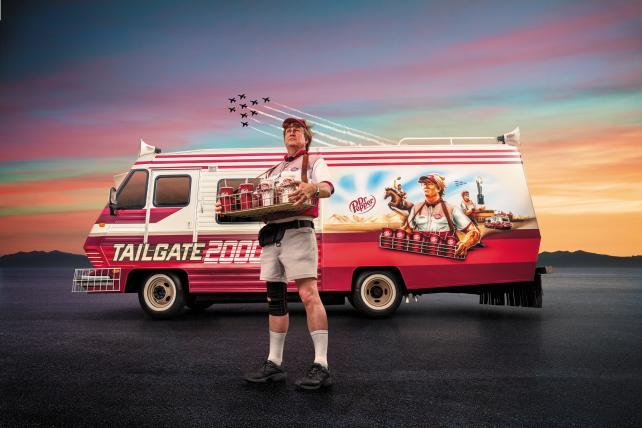 Delusional concessions vendor Larry Culpepper is gearing up for his third season as the face of Dr Pepper's annual college football pitch, anchoring a multi-platform ad campaign that includes a heavy dose of national TV, as well as the requisite social media executions and a print component.

Portrayed by actor James M. Connor, the garrulous soda jerk will be featured in 10 new TV spots that are set to air throughout the season and on into January's College Football Playoff. The first execution, a 30-second spot that introduces the "Tailgate 2000," a tricked-out RV Larry commandeers in his role as the brand ambassador, began airing on Aug. 22. In the first five days since it premiered, the spot aired 284 times on football-friendly venues like SEC Network, ESPNU, CBS Sports Network and Big Ten Network.

Fans will be able to get a closer look at the deluxe conveyance, which features pebbled-leather pigskin seats, Astroturf upholstery and a custom airbrushed mural depicting Larry in a number of mock-heroic poses, when the vendor rolls up to AT&T Stadium on Sept. 3 for the eighth annual Cowboys Classic. ESPN's production of the "Saturday Night Football" matchup between USC and Alabama kicks off at 8 p.m. EDT.

The initial spot depicts Larry as he straps in for his season-long tailgate/road show. Subsequent spots will find him rubbing elbows with the likes of Marcus Allen, Vince Wilfork, Steve Spurrier, Jesse Palmer and Cardale Jones, and another high-profile figure whose identity Dr Pepper is keeping under wraps. Together the first eight spots will form an extended narrative that will culminate in a final pair of new ads set to air exclusively during ESPN's Jan. 9 presentation of the 2017 CFP National Championship Game.

"We've been a big part of college football for a long time," said Jaxie Alt, senior VP-marketing, Dr. Pepper. "The first spot is really all about Larry getting ready for the college football season, and the excitement it brings."

Ms. Alt said the new spots will primarily air on ESPN, ABC, CBS and Fox, as well as on various other sports cable properties. "A lot of them, for sure, will air in-game," she said.

Larry and his RV have committed to making five on-site appearances during the upcoming season, including the aforementioned game in Arlington, as well as a stopover in Madison for the Oct. 29 Nebraska-Wisconsin showdown and subsequent jaunts to the SEC Championship Game, Peach Bowl and CFP National Championship Game.

The road trip aspect of the campaign is an opportunity for fans to tailgate with Larry, who is forever trying to convince skeptics that the revamped playoff system was his brainchild. (A jpeg housed on his Geocities-esque website -- the only thing that's missing is a tinny, irritating MIDI file at the bottom of the page -- demonstrates that he unsuccessfully attempted to copyright the four-pronged playoff bracket.) "Over the last two years, Larry has really become an icon," Ms. Alt said. "People love seeing him, and we wanted to figure out how we might bring Larry to the fans."

Among the digital aspects of the campaign are a sponsored Snapchat lens that allows users to virtually don Larry's signature flip-up shades and visor, and a Facebook Live video that will stream live from the USC-Alabama game.

As part of a national casting effort, Dr Pepper said it screened 575 auction tapes before it decided that Mr. Connor was the very embodiment of the Larry it had in mind when the concept was ginned up by Deutsch, Los Angeles.

As has been the case since the playoff format was introduced two years ago, Dr Pepper once again will serve as the presenting sponsor of the championship trophy. Dr Pepper is one of the original 15 brands that signed on as official sponsors of the CFP back in 2014; its six-year deal secures airtime in the annual title tilt, as well as the Dec. 31 playoff games (this season, the Peach Bowl and Fiesta Bowl have the honors) and the Orange, Rose, Cotton and Sugar Bowls.

Among soda brands, Dr. Pepper is decidedly the big man on campus. According to iSpot.tv estimates, Dr Pepper last season spent some $13.6 million on regular-season in-game college football inventory, and another $7.21 million on bowl games. By comparison, during the same period Coca-Cola invested just $2.67 million in college football airtime, while big-time NFL spender Pepsi ($22.7 million) didn't spend a dime on the Saturday games.

But winter is a long way off, and the first order of business is to gear up for the rigors of the coming football season. "No doubt, this is a huge bet for us," Ms. Alt said. "It's a big investment, and we're airing more spots in this year's campaign than we did a year ago."