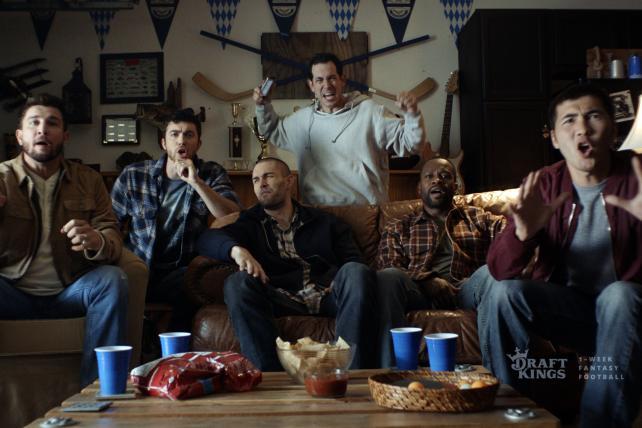 After riding the pine for the better part of the year, the daily fantasy sports leaguer DraftKings is jumping back into the ad game in a big way, launching a new football-focused campaign that includes two fresh national TV spots.

Having run the sprockets off last season's all-but-ubiquitous player-acquisition spots, DraftKings enters the 2016 NFL season with a new message, one the company said has more to do with emphasizing the inherent fun of fantasy sports over the prospect of winning a bundle. To that end, DraftKings is kicking off the campaign with a 30-second spot that features New England Patriots tight end/unstoppable goofball party monster Rob Gronkowski, who plumbs the depths of his trademark enthusiastic bewilderment to talk up a DFS player's savvy. ("Without Jim, I wouldn't have been in Jim's lineup!")

Gronk is no stranger to the Boston-based DraftKings, having already participated in a number of promotional events sponsored by the company. Last month, he and teammates LeGarrette Blount and Malcolm Butler handed out free ice cream to fans in the Downtown Crossing district, and in November he informed his Twitter army that he'd reserved a space on his infamous post-season party cruise for the winner of a current DraftKings contest. Patriots owner Robert Kraft owns an equity stake in DraftKings, which maintains a Fantasy Sports Zone eatery inside the team's Gillette Stadium.

A second spot, starring magnet-fingered Houston Texans wideout DeAndre Hopkins, reiterated the symbiotic relationship between DraftKings players and the NFL stars who make up their weekly rosters. (After a stubbled suburbanite racks up 276 fantasy points around the superstar receiver, Hopkins testifies that "for complete strangers, we're hella tight.")

Both the Gronk and DeAndre spots end with a voiceover inviting viewers to "play in the free $100,000 contest [in] week one." The brief call to action is worlds apart from last season's signature spots, which dangled the carrot of million-dollar payouts over a montage of excitable frat guys flinging beer around a North End (Boston) restaurant bar while clutching a giant novelty check.

Both spots were developed by the Sausalito-based indie shop Butler, Shine, Stern & Partners, which in July 2015 won the DraftKings account after a review.

While the NFL's network partners undoubtedly are pleased to see that DraftKings is gearing up another football-centric marketing initiative, the company has no plans to replicate its hefty 2015 ad spend. According to iSpot.tv estimates, DraftKings last season spent $37.3 million on in-game NFL inventory, a figure that jumped to around $48.4 million when buys in pre-game shows were factored into the mix.

"We have new plans for this season," said Stephanie Sherman, Senior Director, Acquisition Marketing, DraftKings. "Last year was all about awareness; this year, we'll be focusing on reaching a highly targeted, more engaged audience. You won't see us in a multitude of high-impact sports, and we're definitely spending less."

While DraftKings did not specify precisely how it would allocate its TV budget, NFL partners said that the company has been buying spots in apposite shows like ESPN's "Fantasy Football Now" and NFL Network's "NFL Fantasy Live." The brand is also expected to continue to appear during various pre-game shows.

As DraftKings effectively sat out the 2016-17 upfront, the cost of buying NFL in-game spots in scatter would appear to be prohibitively expensive, but those involved in selling that inventory say that they'd be surprised if the company sits out actual gameplay altogether. For her part, Ms. Sherman said DraftKings would continue to buy time in general-entertainment programming that draws a cohort of younger fantasy enthusiasts; last year, it aired spots in an eclectic mix of non-sports that included "The Simpsons," "Late Night with Seth Meyers," "The Bastard Executioner" and "Bar Rescue."

Ms. Sherman said DraftKings applies the same sort of number-crunching that informs its core business to its media strategy. "We are a very data-driven company that focuses on optimization; we make the buys, look at the data and see what's working," she said.

The new ads are set to begin airing today, although DraftKings first sent up a signal flare last week, when it sponsored ESPN's 28-hour "Fantasy Football Marathon," a programming initiative that included a pair of standalone specials and fantasy-related segments threaded throughout prime time and in multiple editions of the "SportsCenter" flagship. Along with the on-air perks that came with its special sponsorship, DraftKings also aired 14 national TV spots during the fantasy marathon.

While DraftKings curbed much of its summer TV spend as it awaited the outcome of a key regulatory decision in New York, it still invested a fair amount on Major League Baseball games and select shoulder programming. Meanwhile, its rival (and rumored future partner) FanDuel, hasn't spent a dime on national TV time since the first week in February.

Joining the new-look DraftKings is long-time Arnold Worldwide managing partner Don Lane, who earlier this month assumed the role of Senior-VP, Brand & Creative. "I'm really enamored with DraftKings and it's been exciting to watch them make their mark on Boston," Mr. Lane said. "After 20 years at Arnold, where I worked on some pretty amazing brands -- Volkswagen, ESPN, Volvo, Titleist, you name it -- I was really struck by the opportunity to build and shape and sharpen the DraftKings brand," he said, by way of explaining what drew him to the fantasy sports outlet. "What's interesting here is that this is a very analytics-driven company, and I think bringing to bear the experience I have will make for a really powerful one-two punch."

Mr. Lane said he is also excited about how a newly introduced social feature, "Leagues," will help improve the end-user experience. Leagues essentially makes it easier for players to compete with their friends in private contests, thereby encouraging the unique blend of camaraderie and unabashed smack-talk that is a hallmark of the whole fantasy experience.

"One thing we heard was that fans wanted more engagement with the people they knew, and what's so impressive about these guys [at DraftKings] is how they're always learning, always looking to improve the fan experience," Mr. Lane said. "It's early to say how Leagues will evolve, but you can count on enhanced social features that will be added to the game experience in the coming weeks."

While preseason games are underway, the 2016 NFL season officially kicks off on Thursday, Sept. 8, when NBC hosts a rematch between Super Bowl 50 antagonists Carolina and Denver. Demand for in-game inventory continues to out-strip everything else on TV, as buyers said the average unit cost of the marquee network packages rose 6% in this year's upfront.