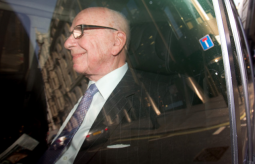 Rupert Murdoch at the height of the frenzy over phone hacking in the U.K.

A similar initiative was defeated last year at News Corp., which split this year into a newspaper company that kept the News Corp. name and the more entertainment-focused 21st Century Fox, but Christian Brothers Investment Services and the British Columbia Investment Management are making another attempt.

The companies, which are pushing for an independent chairman at 21st Century Fox company, said the idea has also been endorsed by other proxy-voting firms, such as Institutional Shareholder Services. The resolution will be voted on at Fox's shareholder meeting on Oct. 18.

Backers of the resolution say having Mr. Murdoch hold both the chairman and CEO jobs has led to a lack of balance at the entertainment company, which owns the Fox TV network and the 20th Century Fox film studio. They also cited the phone-hacking scandal at the News of the World paper that had been owned by News Corp.

"Fallout from the News of the World phone-hacking scandal in the U.K. continues to plague the company and underscores the need for strong corporate governance guidelines, including independent board leadership," Christian Brothers and British Columbia Investment Management said today in a statement. "Despite ethical lapses, 21st Century Fox, created as a result of News Corp.'s split in June 2013, retains Rupert Murdoch as joint chair and CEO."

A spokesman for 21st Century Fox called the drive misguided and noted that similar efforts had failed before.

"ISS and Glass Lewis' analyses are completely out of touch with reality given the incredible value 21st Century Fox has created for shareholders," the spokesman said in an email. "The Company's directors have shepherded remarkable progress both in terms of bolstering shareholder value and strengthening 21st Century Fox's corporate governance and compliance policies, and we strongly support their election."

"The disproportionate focus that both ISS and Glass Lewis place on historical matters underscores the widening credibility gap between them and our shareholders," the spokesman added, "as their analyses consistently disregard the value we have created for our investors and the significant improvements we have made to our compliance programs."