It's the Super Bowl for news networks. The talking heads and interactive maps will be out in full force tonight as months of wall-to-wall election coverage culminate in what can only be compared, fittingly if unfortunately, to a high-stakes reality TV results episode.

But it won't just be the traditional news channels vying for viewers' attention. This presidential cycle is not only monumental for the race itself, but for the onslaught of alternative political coverage targeting younger viewers who may not subscribe to a traditional TV service.

While livestreams from BuzzFeed on Twitter and The Young Turks on YouTube aren't expected to be the first stop for the majority of viewers -- and it is unlikely any of these will be first to call the race -- they are poised to create a new dynamic in election coverage.

Ad Age staffers will be tuning in with live analysis of election night coverage from across TV and around the web.

7:30 p.m: Tuned in to BuzzFeed's live stream on Twitter just in time to catch this gem: "Doves are really just pigeons with white privilege." -J.P.

7:45 p.m.: Switched over to Ozy and Wired's live stream on Facebook. They are reporting live from Washington, D.C. restaurant Busboys and Poets. Guest is Cornell Willam Brooks, president of NAACP. -J.P.

7:56 p.m. On the NowThis stream on Facebook Live they are playing Plinko to pick video highlights from the election. The first "cringe worthy" video is of the USA Freedom Kids performing at a Trump rally. NowThis tried to get them to appear on the stream. -J.P.

8:15 p.m. Watching CNN on the TV screen is a welcome relief from these live streams. My computer and phone sound like a college dorm room. -J.P.

8:31 p.m.: Watching CNN may be a relief from live-stream craziness, but the constant "Key Race Alerts," Wolf Blitzer's energy and the music are certainly not relaxing. Audi, sponsor of the "Key Race Aerts," is at least getting its money worth with a frequent presence on-screen. -N.I.

8:39: Complex News's live video feed on YouTube is handling coverage with a game show format, asking trivia questions of two contestants. One gets credit for failing to come up with the answer "Ted Nugent" on the strength of saying that's what she was going to say. Cut to a segment on marijuana legalization. Live commenters' remarks include "I've never tried weed but all my friends do it but nawww not for me." This might sound more dismissive than I mean it to, even if John King is drilling down on Wake County in North Carolina over on CNN right now. There's definitely something to be said for engaging people who might not be watching the magic wall map on CNN. Pre-stream ads on Complex include "Call of Duty: Infinite Warfare" on PlayStation, Smirnoff's Moscow Mule ad campaign and "The Daily Show With Trevor Noah," although those spots may well have been sold against general demographic targets than election night coverage in particular. -N.I.

8:47: Funny or Die's live stream has a roundtable with a Cuck, Femi-Nazi and Hipster. The sad thing is it's hard to tell the difference between satire and real coverage at this point. -J.P. 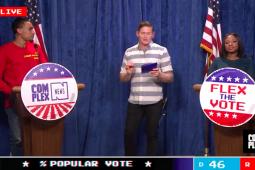 Complex Media runs a quick quiz show during its coverage.

8:57 p.m.: BuzzFeed cuts to commercial break. There are two spots for Amazon Prime's "The Man In The High Castle," the streaming network Cheddar, the Brad Pitt movie "Allied" and promos for Twitter and BuzzFeed News. Twitter sold the ad packages for the election coverage, offering mid-roll spots, as well as sponsorship opportunities for original news clips produced by BuzzFeed. Twitter and BuzzFeed will share ad revenue. -J.P.

9:20 p.m.: Lifetime didn't want to be left out on election night. The network best known for shows like "UnReal" and "Dance Moms" partnered with ABC to air a special of "The View." Joy Behar is a little nervous, saying that things aren't moving the way she thought they would. The women are drinking a cocktail aptly named "The Bad Hombre." Chef Rocco DiSpirito is showing off his Dip-lorables. -J.P.

9:23: Megyn Kelly jokes that she's growing concerned that this thing won't be called in time for her co-hosting gig with Kelly Ripa Wednesday morning. -N.I.

9:40: The Young Turks drops the f-bomb. Certainly not seeing that on CNN and Fox News, at least not yet. They are freaking out over how close the race is right now. -J.P.

9:47 p.m.: It's hard to imagine that ABC would really stall bad word about a primetime show until the world was focused on the U.S. presidential election returns, but nonetheless word has emerged via Variety that ABC just canceled freshman series "Conviction." (The article notes that no "official" decision has been made.) Then again, Freeform, formerly known as ABC Family, has also canceled a show tonight, Variety reports. -N.I.

9:55 p.m.: Doesn't look like these live streams are drawing very many eyeballs. On Facebook Live, NowThis has 644 people watching, while the Ozy and Wired stream has just 36 viewers. Even in the digital world traditional media still dominates. ABC News, in comparison, has over 107,000 viewers on Facebook Live. -J.P.

John King is better at the touchscreen than anyone else in America is at anything.

10:48: BuzzFeed's crew seems pretty grim. They cut to footage from MSNBC to show that others are bummed as well. "Does that mean I have time to pee?" an off-screen BuzzFeed voice is heard saying. No. Time for fun tweets about how the opposite of Netflix and chill is CNN and panic. Ensuing ads include the Johnnie Walker spot also seen on TV tonight and an ad for Twitter. -N.I.

11:00: Stephen Colbert's live Showtime special opens with an animated sequence portraying Trump as a terrifying, and surprisingly effective, political villain. On cable, Mr. Colbert can identify himself as "Stephen Fucking Colbert." Early monologue joke: "What a year... tonight has been." More: "This one is a nail-biter, and a passport-grabber. It feels we're like we're trying to avoid the apocalypse and half of the country is voting for the asteroid." -N.I.

11:30: The live special of "The Daily Show" is about as rocked as any mainstream media outlet, with the added bonus of openly opposing the result that seems to be materializing. "I genuinely do not understand how America can be this disorganized, or this hateful," Mr. Noah said.