ESPN has been selling so-called "native" advertising for years, getting brands like Coors Light and Home Depot to sponsor the cable network's programming such as SportsCenter segments and College GameDay. Now the cable network is letting brands bring their own programs onto its digital properties.

ESPN has begun pitching advertisers on streaming their branded videos within the network's WatchESPN app, which offers live and on-demand programming on mobile and connected-TV devices. The network initially tested the native in-app slot in August with Dick's Sporting Goods for the retailer's "Hell Week" docu-series.

"We've long felt as we've moved WatchESPN and [ESPN's digital-only channel] ESPN3 into broader distribution and more usage, there was an opportunity to take advantage of that destination and … that we could begin to offer advertisers a place to take the content they're creating and create channels within that environment," said Ed Erhardt, president of customer marketing and sales at ESPN. 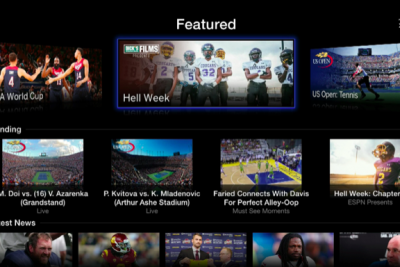 ESPN experimented with a couple different placements for the pilot test with Dick's Sporting Goods. The retailer's series -- about a high-school football team during the grueling preseason practice week -- appeared in the WatchESPN app's main "featured" carousel alongside entries for sports programming like the U.S. Open and world basketball championship as well as in a lower placed "ESPN Presents" section. Wherever the program appeared, it carried a Dick's Sporting Goods logo to denote it as branded content.

The branded series ran within WatchESPN for two weeks, but Mr. Erhardt and Dick's Sporting Goods VP-Brand Marketing Ryan Eckel declined to share results like how many people watched the show.

"We know we're extending the reach beyond broadcast," Mr. Eckel said, describing the viewership numbers as "significant." He declined to say how much the brand paid ESPN for the campaign, noting that it was part of a larger, multi-platform advertising deal with the cable network. Dick's Sporting Goods worked with its agency Optimum Sports on the deal.

Dick's Sporting Goods has produced three seasons of "Hell Week" with Tribeca Digital Studios. The first season streamed on YouTube, and the second season aired on ESPN as a standalone half-hour program. For the third season ESPN and Dick's Sporting Goods cut up the series into five four-minute segments that aired during SportsCenter over five days. But running the program during SportsCenter meant its audience was limited to whoever was watching the sports newscast at any given time (or whoever recorded it and watched it later). The retailer said it wanted to discuss distribution on ESPN's digital properties, specifically WatchESPN.

"We pushed for that placement because we want that content to be there. We believe it's legitimately engaging content alongside other content on ESPN and WatchESPN," Mr. Eckel said. He added, "ultimately we're trying to produce something that isn't really an ad and doesn't feel like an ad to consumers."

ESPN is looking to hold other brands to the same standard as it pitches more advertisers on the WatchESPN placement. That may be a turn-off for some brands who just want to take their 30-second TV ads and paste them into WatchESPN's home page. But it's also a way for ESPN to turn those brands on to working with its in-house creative agency ESPN CreativeWorks. "We think we've got a pretty good handle on how to do [branded content] in sports with CreativeWorks…. We want to play in the space. If you want to create content around sports, you can do it with ESPN," Mr. Erhardt said.

ESPN is still working out the details of its plans for how brands can distribute their content within WatchESPN. For example, it hasn't gotten to a point where it's looking to require that an advertiser's video be of a certain length. And it's considering expanding the WatchESPN placement for brands into an always-on destination similar to a YouTube channel, Mr. Erhardt said.

"At least in the beginning our belief is to be steady, be smart and be sure that the kinds of content we put up there feel right and are right. We're not looking to have thirty different brands up there [at the same time]," Mr. Erhardt said.

ESPN is "in discussions with a bunch of folks right now," Mr. Erhardt said, declining to name names or say whether any deals have been signed. Asked if WatchESPN will have any advertisers taking up the WatchESPN native ad slot later this year, he said, "my sense is we'll have a few people taking advantage."