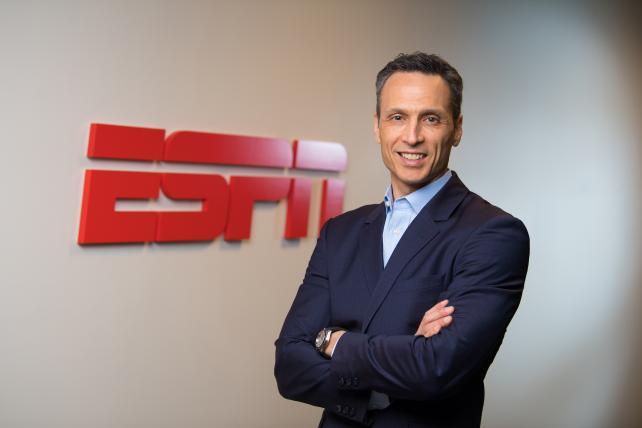 Speaking with reporters at ESPN's headquarters in Bristol, Connecticut, Pitaro also said the network's relations with the NFL have "positive momentum" after some tense years.

"The relationship, the partnership is incredibly important to us," Pitaro said, citing weekly discussions between the league and network executives. "That programming cuts across everything we're doing. We're feeling very positive momentum."

The league, its broadcasters and sponsors have been navigating a minefield since players began kneeling during the national anthem to protest police brutality and racial inequality. Separately, parents have discouraged their children from playing out of concerns about head injuries. And ESPN itself became the target of Donald Trump's ire after sportscaster Jemele Hill called the president a white supremacist. Ratings have fallen for a couple years, also hurt by allegations of domestic violence leveled against some players.

Pitaro said the company typically doesn't air "The Star-Spangled Banner" and doesn't plan to this season. That should shield the network somewhat from the controversy.

"It's not our job to cover politics, but we will cover the intersection," Pitaro said. "When people tune into ESPN, they're not looking for political coverage, and I've made that very clear to our team."

Pitaro, who assumed leadership of the network in March, has been trying to lead a turnaround of ESPN, which has been body-slammed by economic and cultural forces over the past two years, including the loss of viewers to online entertainment.

To address public concerns, the league has instituted a number of new rules for the regular season, which begins Sept. 6. They include a "helmet rule," that makes it a penalty to deliberately charge an opponent head-first. NFL officials said in May that teams would be fined if players knelt during the anthem, though player representatives and the league have been in discussions about the rules since then.

As an example, he cited the Booger Mobile, a movable chair on the sidelines where correspondent Booger McFarland will give commentary and analysis.

Pitaro has stepped up the acquisition of sports rights, particularly those aimed at younger viewers. The network purchased the broadcast rights to the mixed martial arts Ultimate Fighting Championship in a five-year, $1.5 billion deal, and rights to the Overwatch League's esports competitions. Pitaro also extended a deal with Top Rank boxing, a major promoter of fights. And ESPN is hiring again after several rounds of layoffs.

"Esports is not a fad, we see it ascending," Pitaro said. "My 15-year-old son spends a ton of time watching Ninja play Fortnite on Twitch."

Pitaro was appointed to lead the network after the surprise departure of John Skipper, who later said he had been blackmailed by a cocaine dealer. In May, the network introduced ESPN+, a $5-a-month streaming service featuring college sports, Little League, and some Major League Baseball and hockey.

ESPN's audience is down 3 percent to 1.89 million nightly viewers in the TV season that began last September, with "Monday Night Football" contributing to the drop. That still makes it the second-most-watched cable network, after Fox News, according to Nielsen data. NFL games are historically the most popular programming on U.S. TV.

Disney told investors last week that ESPN showed profit growth in the quarter ended in June and that subscriber losses at the company's cable networks were moderating. Iger said subscriptions to the new sports streaming service were exceeding his expectations.

ESPN already has among the largest sports-rights deals in the business, including an eight-year, $14 billion deal with the National Basketball Association and a seven-year $15.2 billion package with the NFL, according to Guggenheim Securities. The football deal, for ESPN's Monday Night Football, runs through the 2021-22 season.

"We like the game of football," Pitaro said. "We're optimistic about not just the next four years but the ongoing relationship."