Dr Pepper, Gatorade and Ford Among The Players
READ THIS NEXT
Does it matter if Facebook advertisers can still target fans of Trump? 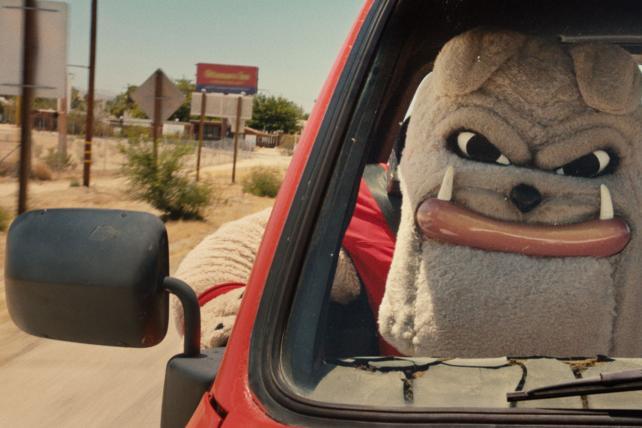 ESPN is suiting up for the long march to the third annual College Football Playoff, launching a fall campaign that features a menagerie of mascots converging upon a convenience store stocked with some of the network's biggest brand partners.

Set to bow Saturday, the 30-second "Crossroads" spot features bulldogs and gators and tigers of every stripe, a virtual flashmob of costumed critters who gather to gas up and grab supplies for the journey to the semifinals and beyond. Sharp-eyed observers will spy cameos by official College Football Playoff sponsors Dr Pepper, Gatorade, Goodyear and Ford in this initial spot, while subsequent iterations ("Playoff Prep," "Tampa Bound") will include the likes of Reese's, Dos Equis and Cadillac.

While not an official sponsor of the CFP, the Knoxville-based Pilot Flying J chain of gas stations/convenient stores is also prominently featured throughout the campaign, serving as the locus where the fans and brands collide. But the placement within the ESPN spots isn't the only place you'll see Pilot this fall; the company on Sept. 1 made its first foray into national TV with buys in ESPN's "SportsCenter" and "College Football Countdown," as well as ESPN2's "Mike & Mike."

As a roadside convenience, the Pilot brand meshed nicely with the crossroads metaphor, said Sean Hanrahan senior VP-brand and marketing solutions, ESPN. "The convenience store lies at the intersection of all the different roads leading to the playoff," Mr. Hanrahan said. "Naturally, that setting is a perfect place to showcase so many of the College Football Playoff sponsors in a seamless, organic integration."

Unlike last season's campaign, which focused on the college football world's collective desire to knock off Ohio State -- the Oregon Duck looked positively murderous -- this year's more inclusive effort at times elevates the ordinary fan at the expense of the mascots. For example, rather than shine a spotlight on Stanford's goofy, justly-derided Tree, the "Crossroads" spot depicts a Cardinal supporter buying an entire display of redwood-shaped car air fresheners. And no, those Auburn students staggering under their payload of toilet paper aren't suffering from IBS, they're gearing up to revive the campus tradition of "rolling the oaks at Toomer's Corner." (Besides, with three other tiger mascots on hand, an appearance by Aubie would've felt like big-cat overkill.)

An extension of ESPN's original "Who's In?" campaign from 2014, the latest CFP initiative gathers representatives from the teams most likely to vie for a spot in the Jan. 9 National Championship Game in Tampa. Defending champs Alabama cast a long shadow -- literally -- from their perch inside a crimson monster truck, while preseason No. 2 Clemson roars into the frame in a tricked-out Ford Mustang. In fact, only a handful of teams in the preseason AP Top 25 poll aren't featured in the "Crossroads" spot.

"Crossroads" will run for three weeks before giving way to fresh creative, including the late-season "Playoff Prep" spot, which depicts a Pilot staffer stocking the shelves with trophy polish, antacids and "special reserve playoff Champagne." Continuing the overarching travel theme, the 30-second promo ends with a stark reminder that most teams will reach a dead end long before the playoffs kick off on Dec. 31.

"If we've learned anything these last two years, there isn't only one road to the playoff. Ask Ohio State year one. Ask Alabama year two," said Emeka Ofodile, Senior Director of Marketing for ESPN. "There are many roads to the playoff and each season, it's all about finding the right one."

That multi-path metaphor holds true for ESPN's digital push. In a bid to reach younger fans, the network is kicking the tires on a national Snapchat filter to drive tune-in of ABC's Saturday prime time opener (USC vs Alabama), and is testing Google's new 6-second "Bumper" ad format. The network is also doing buys on Xbox One, Facebook and Instagram.

"Crossroads" and the subsequent CFP spots were created in collaboration with Wieden & Kennedy New York.

All told, ESPN has lined up 16 CFP partners, of which 14 got in on the ground floor two years ago. Vizio cycled out after one year of sponsoring the Fiesta Bowl (which still awaits an official backer for 2016), and Dos Equis came onboard in December. Eckrich, a packaged-meat purveyor and subsidiary of Smithfield Foods, is the newest official CFP sponsor, having inked a deal in July. (As it happens, ESPN "College GameDay" analyst Kirk Herbstreit has served as the official spokesman of Eckrich since 2008.)