#FailingNYTimes Feasts in Trump Era Amid Famine for Local Papers 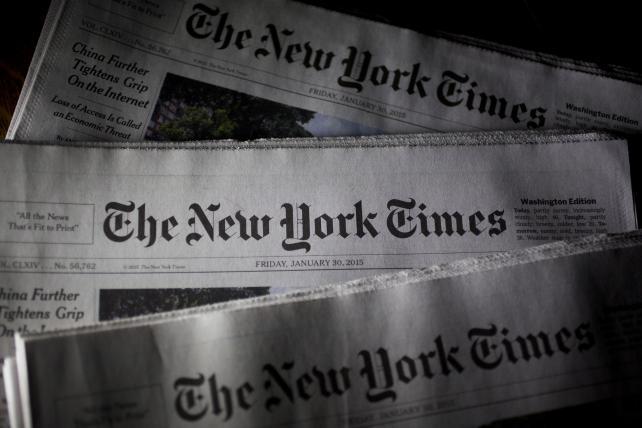 But in the stock market, the New York Times Co. has been looking like a roaring success lately, particularly by the standards of the beleaguered newspaper industry. Since Trump won the presidency in November, the publisher's share price has soared 57%. Online subscriptions are up, bigly -- about 19% in the first quarter alone.

Scrutinizing the president turns out to be good business, at least for top national papers like the Times and the Washington Post. A different story is playing out for local publications, which are still suffering through the industry's long decline and need to retain subscribers who are sympathetic to Trump. Consider McClatchy, which owns about 30 papers, including the Miami Herald. Its shares have plummeted 31% since Election Day. Subscriptions have barely budged.

The diverging fortunes in the industry have underscored what many in the traditional news business know only too well: Famous titles can lumber on as they grope for a digital future, but most local papers are fighting for survival.

"For us in Texas, the bump has definitely been more muted because we're not the primary source of news out of the White House," said Mike Wilson, editor of the Dallas Morning News. "We serve a community with many deeply conservative pockets. That may be a different demographic from The New York Times and Washington Post audience."

At the Morning News, digital subscriptions rose 7% in the first quarter, or by about 1,200, a solid increase but not the blockbuster gain reported by the Times. Shares of A.H. Belo Corp., which owns the Morning News, are down 7.6% since the election.

The Washington Post, owned by Amazon.com founder Jeff Bezos, has more than 900,000 digital subscribers, including hundreds of thousands who signed up in the first quarter, according to a person familiar with the matter who asked not to be identified discussing private information. The newspaper declined to comment on its subscriber figures.

The Post and the Times have been competing for scoops on the biggest story of the year: the Trump administration's alleged ties to Russia. On several occasions, they've published blockbuster stories within hours of each other. Trump often attacks their coverage on Twitter, which seems to drive even more readers to subscribe.

Those subscriber gains show that readers of the Times and Post will pay for journalism online. The rest of the U.S. newspaper industry, reeling for two decades, is still searching for a sustainable business model. Newspapers are on pace to lose about 15% of their print advertising revenue this year, a similar number to last year, according to Rick Edmonds, a media business analyst for the Poynter Institute.

Publishers large and small are banding together to seek a greater share of the ad dollars flowing to Google and Facebook. The News Media Alliance, which represents 2,000 news organizations in the U.S. and Canada, is proposing a law that would allow publishers to coordinate their negotiating efforts with the pair without violating antitrust restrictions.

Local 'crisis'
While national newspapers can afford to pour resources into covering Trump, local outlets do the less glamorous but important work of sending reporters to city council meetings, statehouses and school boards to serve as government watchdogs. Earlier this month, the Star-Ledger of Newark, New Jersey, made headlines for taking aerial photos of Governor Chris Christie sitting on a deserted beach he'd ordered closed to the public.

"The biggest crisis of journalism in America is the crisis of local news," New York Times Executive Editor Dean Baquet said at a recent Recode conference. "I don't know what the model is for them. We've got to figure it out."

The answer, according to Gannett, is to listen more closely to Trump voters. The company's USA Today Network, which includes the USA Today newspaper and about 100 local newsrooms, has assembled a panel of about two dozen Trump voters to interview on various topics, such as Trump's tweets or his first 100 days in office.

"Because of what's going on at the national level and the debate around 'fake news,' people are more cognizant of news in general and more willing to pay," said Amalie Nash, executive editor for the west region for USA Today Network.

Reader backlash
Yet for some publications in the conservative regions that voted for Trump, aggressive coverage of the president can trigger a reader backlash.

"There were a few protests and cancellations over that," said Wilson. The paper also lost subscribers after endorsing Hillary Clinton for president last fall.

Without Trump boosting its business, the Morning News is discussing with Facebook Inc. ways in which the social network could help boost subscribers. It's also focused coverage on local topics, such as the Texas foster care system and the Dallas Cowboys.

Hot buttons
The Boston Globe, controlled by Red Sox owner John Henry, has seen a larger spike in digital subscribers than most other newspapers -- perhaps a result of a predominantly liberal audience. Online subscribers to the Globe have jumped 25% since the November election and are approaching 100,000.

In the Trump era, the Globe has shifted more local reporters to cover hot-button topics of the administration, such as immigration, said Globe editor Brian McGrory. The Globe's Washington bureau covers the Trump administration with a local focus, such as its recent story about Jared Kushner's real estate deals in suburban Somerville while the presidential son-in-law was a student at Harvard.

Like other local papers, the Minneapolis Star Tribune has been tightening access to its website to persuade more people to buy digital subscriptions. The newspaper has about 50,000 digital subscribers after adding about 4,000 so far this year, said Mike Klingensmith, the paper's publisher.

The Star Tribune has also seen "a modest number" of readers drop their subscriptions after the paper published critical stories of Trump that were originally reported by the Post and the Times, Klingensmith said.