I tell you, I've just about had it with Hollywood. Why, every time I turn on the TV these days it's all reality-cooking-competition this and slutty-forensic-doctors that. It's enough to make a guy long for the five-channel hinterland of his youth. 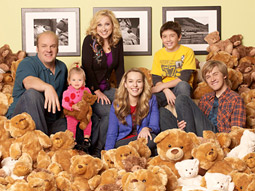 'Good Luck Charlie'
Credit:
Disney
They sure knew how to make TV shows back then -- decent-hearted, family-celebrating TV shows. The right-minded plots calibrated our moral compasses; the laugh track calibrated our, uh, laughing. Where have you gone, Jenna von Oy? A nation turns its be-Snooki'd eyes to you.

Fortunately, this sad cultural state of affairs has not gone unnoticed by one purveyor of quality home-brewed televisionstuffs, the Disney Channel. In what is surely a reaction to the preponderance of post-virginal teenage vampirism in today's young-adult cinema and literature, the network has unveiled the first true family sitcom in years, "Good Luck Charlie."

"Good Luck Charlie" chronicles the frantic antics of the Duncan family, newly thrown into chaos by the arrival of a fourth, unexpected child. The show's protagonist, teenage sister Teddy, chooses to dispense advice for the newbie via regular video-diary entries, which run at the start and conclusion of each episode. Only by viewing these diaries and internalizing their wisdom, the show posits, will Charlie someday be able to navigate the perils of an extremely well-adjusted, loving family.

So "Good Luck Charlie" checks out on the whimsical-premise front. But does it pass the other five subsections of my patented family-TV smell test? Let us analyze.

1. Is the titular scamp suitably adorable? I read one review in which Mia Talerico, the year-old sprite who inhabits the conflicted, impenetrable Charlotte "Charlie" Duncan with the same verisimilitude that De Niro did Jake LaMotta, was categorized as a "baby actor." If so, I pity her Baby Emmy competition.

She coos and gurgles on command, her angelic visage belying the probability that she's just pooped herself orange. She is almost unfairly cute, with curls and dimples in abundance. She will make you want to exchange your baby for a tax credit.

2. Are the siblings precocious? Are the parents caring and attentive? Is Alf irreverent? Yes, yes, yes, yes and yes!

"Good Luck Charlie" boldly breaks ranks with sitcom tradition by expanding its family unit to six members. Upper-middle kid Teddy, 15, has never met a situation she couldn't bungle and miraculously repair over the arc of 22 minutes; lower-middle kid Gabe, 10, would have been repeatedly Tasered had he grown up in a house like my own. While the boobish comportment of 17-year-old PJ suggests some sort of early-onset dementia, he always redeems himself by fanning the pretty pretty bangs out of his face and acknowledging that he should've acted more responsibly. He'll make a fine crossing guard someday.

As for Ma and Pa, they're dense in the easy, tolerable way that sitcom parents often are. Mostly, I applaud their ability to support a family of six on the salaries of a small-business owner (dad's in the extermination racket) and a nurse. They are a beacon of restraint in these lean times.

3. Do the plots reflect contemporary trends in child-rearing?: They do not. For instance, a responsible older sibling would never inadvertently swap baby carriages with some rosy-cheeked nymphet he encountered in the park. Where's the heroic, agenda-free Parents Television Council guy when we need him?

4. Is there a peppy theme song, which serves the secondary purpose of raising the profile of the show's comely, contractually-bound-to-Disney-and-its-corporate-subsidiaries-through-menopause multi-threat teen star by having her sing it and appear in a video in which she bounces to and fro? Is there ever!

5. Does "Good Luck Charlie" impart marketer-friendly messages of decency and wholesomeness and respectitude?: That it does, friend. There is nothing remotely objectionable about this program; one could pore over its every frame and not find a single instance of, say, point-shaving. It makes "Silver Spoons" look like "Caligula" by comparison. Despite the possibility that the kid stars might someday Lohan their way into notoriety, there's no safer property on the planet with which to affiliate one's brand.

The final score? An A for "whimsical premise," four passing grades for crucial subcriteria and merely one negative.

In conclusion, "Good Luck Charlie" is the real deal and should be aired in correctional facilities to help rehabilitate hardened criminals.

And so, as I prepare to return to age-appropriate programming about explosions and pie, I bid thee thusly: good luck, "Good Luck Charlie." You won't need it.