ABC on Track to Shatter 13-Year Record for NBA Finals 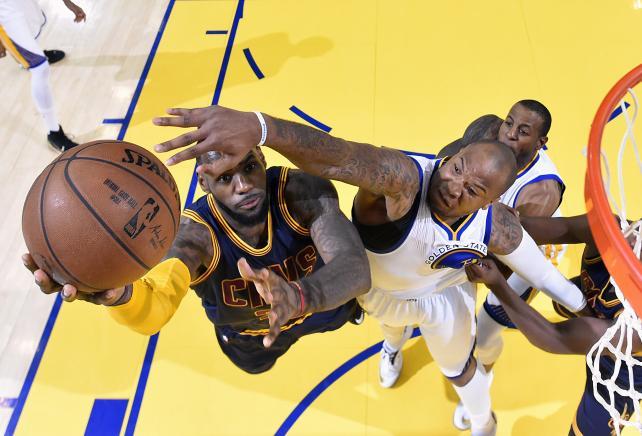 ABC is on a record pace with its coverage of the 2015 NBA Finals, as a pair of absolutely bonkers but enthralling overtime games between the Cleveland Cavaliers and Golden State Warriors has delivered huge ratings.

According to Nielsen live-plus-same-day data, the Cavs-Warriors series is averaging 18.3 million total viewers and a 10.6 household rating. To put that in perspective, ABC through the first two games of the Finals is up 22% in overall deliveries—Games 1 and 2 of last year's Heat-Spurs showdown averaged 15 million viewers—while its household ratings are up 14% versus a 9.0 a year earlier.

While demographics are generally coin of the realm where TV is concerned, they are of secondary importance during big-ticket sporting events. (Unlike general-entertainment programming, which lives or dies on deliveries of adults age 18-to-49, guarantees made to advertisers who buy sports inventory are based on household ratings.) That said, the NBA Finals are averaging a 7.1 in the 18-to-49 demographic, up 18% from the year-ago 6.0.

As a household rating represents 1% of the country's 116.4 million TV homes, some 12.3 million households have tuned in since the series began last Thursday.

While there's a lot more basketball left to play (the best-of-seven-games series moves to Cleveland tomorrow night), ABC is presently on track to break every ratings record in its 13-year stewardship of the NBA Finals. The network is already outpacing its highest-rated series; the first two games of the 2004 Lakers-Pistons grudge match averaged a 10.3 household rating. That five-game series would go on to average a network-high 11.3 household rating.

As the Cavs and Warriors appear to be about as well-matched as anyone could have hoped for—on both nights, Cleveland stumbled into overtime by missing two potential game-winning second-chance buzzer beaters—ABC and the ESPN ad sales team may be forgiven for dreaming of a seven-game series. Given that the average unit cost of a 30-second spot in the Finals is around $535,000 a pop, there's tremendous upside for ABC if LeBron James and Steph Curry manage to go the distance.

Naturally, the longer a series progresses, the higher the ratings. For example, when the Boston Celtics and Los Angeles Lakers staged their latest mutual-antipathy-fest in 2010, it took seven games to sort it all out. The series now stands as ABC's second highest-rated, averaging a 10.6 household rating, thanks in large part to the massive 18.2 rating notched by the deciding game.

Unhatched chickens aside, the Cavs-Warriors series puts the lie to the notion that a small-market club (Cleveland is the No. 19 DMA) spells ratings death in the NBA Finals. Duration is everything. When King James and the Cavs fell to the Spurs in four straight back in 2007, ABC delivered an all-time low 6.2 household rating.