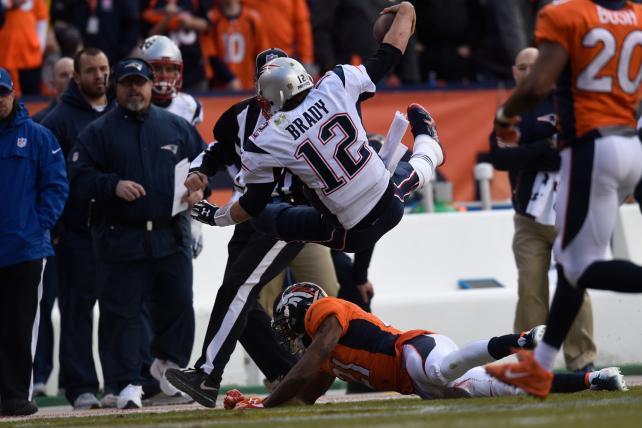 The Denver Broncos bested the New England Patriots in the AFC championship game for a spot in the Super Bowl.
Credit: Aaron Ontiveroz/The Denver Post/Getty Images

The fourth AFC Championship clash between two of the NFL's most celebrated quarterbacks delivered ratings befitting all the advance hype, even if it was defense that made all the difference.

Peyton Manning and the Broncos' 20-18 victory over a rallying Tom Brady and his Patriots also delivered a 29.3 household rating, making the game the top-rated AFC title tilt since New England and Miami drew a 32.4 back in January 1986. More than half (51%) of all televisions in use were tuned into the [presumably] final clash between the QBs, a rivalry which closes out with Manning enjoying a 3-1 advantage over Brady in their head-to-head Super Bowl qualifiers.

While much of the pre-game chatter centered on the battle between the two aging field generals, it was Denver's defense (and a missed extra point attempt) that sealed New England's fate. The Broncos intercepted Brady twice, and when not plucking and batting his passes out of the air, the D hurried, pestered and otherwise harassed the four-time Super Bowl champ. In 61 drop-backs, the Pats' QB was sacked four times and hit another 16.

Anticipation for the game and a Saturday snowstorm that paralyzed the east coast megalopolis from D.C. to New York helped boost CBS's deliveries, which peaked to 62.9 million viewers between 6 p.m. to 6:30 p.m. EST. All told, the broadcast topped last year's Packers-Seahawks game in the early window by 7% in total viewers and the average household rating.

Per Nielsen, HUT levels (industry argot for "households using television") on Sunday were up 11% in D.C. and 7% in Baltimore, two markets that were hardest hit by the blizzard. Boston HUTs were up 6%, while New Yorkers' TV usage was up 3% compared with Championship Sunday 2015.

This year marked the second time in a row that the early window out-delivered the late game. Fox's coverage of the NFC Championship blowout drew 45.7 million viewers and a 24.1 household rating, down 17% and 22%, respectively, when compared with the earlier contest.

While Fox was saddled with a mismatch -- Carolina dismantled Arizona by a 49-15 margin -- the Panthers' high-octane offense and the sheer number of snowbound viewers helped out-rate the analogous year-ago broadcast by 7%. Last year, the late Colts-Pats game averaged 42.1 million viewers and a 22.5 household rating.

The Broncos and Panthers will meet in Santa Clara for Super Bowl 50 on Sunday, Feb. 7, on CBS. Vegas currently has Cam Newton and Carolina booked as 4.5-point favorites.