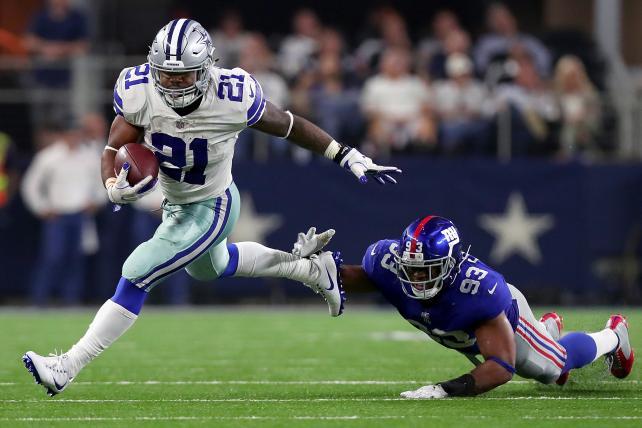 Ezekiel Elliott of the Dallas Cowboys carries the ball against B.J. Goodson of the New York Giants in the second half of Monday's night's game.
Credit: Tom Pennington/Getty Images

As residents and communities struggle through the human and financial costs of the extreme weather event in south Florida, the TV business is experiencing a side effect: a ratings blackout.

As Hurricane Irma bore down on the Sunshine State Sunday morning, Nielsen staffers evacuated the company's Global Technology and Innovation Center in Oldsmar, Florida, a small city located about 16 miles northwest of Tampa.

As a result of the emergency, the overnight, fast-national and live-plus-same-day ratings data will be delayed "in the near term," Nielsen said.

While there's no telling when normal operations go back online in Oldsmar -- while Irma pelted Tampa with gale-force winds and rain, the city didn't suffer the catastrophic damage forecasters had anticipated -- Nielsen said it was monitoring the situation and would provide clients with an update as soon as there was one to give.

Nielsen issued an initial memo to clients Sunday night, as the New York Giants and Dallas Cowboys were squaring up on NBC's "Sunday Night Football."

"In light of the impact of Hurricane Irma, we have mobilized plans to protect our ability to collect data," the memo read. Noting that the storm was expected to hammer Tampa with 100-mile-per-hour winds while leaving a storm surge in its wake, Nielsen said it had closed up shop as a preventative measure.

"Until we are able to resume normal operations, no data will be issued," Nielsen said. "We will keep you updated on the situation and our plans for resuming data release."

The lack of ratings numbers leaves NBC, Fox and CBS at sea regarding the impact the storm may have had on their respective Week 1 NFL ratings. CBS's afternoon single headers included a number of intraconference match-ups (Pittsburgh at Cleveland, Baltimore at Cincinnati, New York Jets at Buffalo), while Fox's late-national window was largely devoted to a defensive brawl between two of the NFL's biggest ratings draws (Seattle and Green Bay).

In a normal opening weekend, when three of the nation's 20 largest media markets aren't being pummeled by a hurricane and some 6.5 million Floridians haven't had their power knocked out, the Seattle-Green Bay defensive showcase would be expected to draw north of 25 million viewers. But if Thursday night's NFL Kickoff Game is any indication, the Weather Channel and cable news outlets are likely to have stolen a big chunk of the usual NFL audience.

As for NBC's first "Sunday Night Football" broadcast of the season, the Giants-Cowboys game didn't exactly live up to expectations. With superstar wideout Odell Beckham Jr. sidelined with a sprained ankle, Eli Manning and the G-Men had an absolutely miserable showing in Arlington, bowing out 19-3 in a singularly one-sided contest. On paper, this looked to be one of the most promising games on the schedule; unfortunately, given the Giants' lackluster performance and the tempest down in Florida, it's unlikely that NBC will be greeted with monster deliveries when Nielsen eventually releases the Sunday ratings data.

In addition to the NFL results, broadcasters are eager to assess how the 50th season premiere of "60 Minutes" fared last night on CBS (ousted White House chief strategist Steve Bannon sat for an interview with Charlie Rose), and what sort of turnout Fox managed to scare up with a special premiere of Seth MacFarland's space opera "The Orville."

Nielsen relocated its TV data-gathering operations (and hundreds of servers) from New York to Oldsmar a decade ago. In March, the company experienced a power outage that delayed its ratings reports for a handful of days; among the results that were slow in coming were the ratings for the opening round of the NCAA Men's Div. I Basketball Tournament.