Does Forbes' First Sponsored Blog Look Too Much Like Editorial?

As SAP Weighs in Under AdVoice Label, Some Object
READ THIS NEXT
Watch Elon Musk’s awkward ‘SNL’ promos—plus, why his hosting stint is so controversial

NEW YORK (AdAge.com) -- Forbes' website has started running the sponsored blogs it promised back in September, letting the business software marketer SAP weigh in on cyber security, corporate reorganizations and business analytics. Some observers are saying the paid posts look too much, however, like posts by Forbes' own staff. 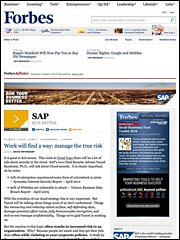 A "Forbes AdVoice" label appears toward the top of the SAP blog with the phrase "connecting marketers to the Forbes audience." Clicking a "What is this?" link displays a fuller explanation: "Forbes AdVoice allows marketers to connect directly with the Forbes audience by enabling them to create content -- and participate in the conversation -- on the Forbes digital publishing platform. Each AdVoice is written, edited and produced by the marketer."

An SAP banner ad appears below the AdVoice flag. And, of course, the standard author bio on the right describes "the world's leading provider of business software," not a Forbes staffer. 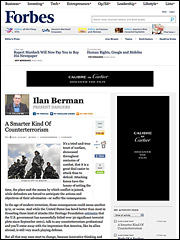 But the blog post is otherwise presented exactly as if it were an editorial post offering objective business news or analysis. And that's drawing criticism in at least a couple quarters.

One person who pointed SAP's Forbes blog out on Twitter said, for example, "Um, no, that's not different enough from editorial blogs."

The American Society of Magazine Editors doesn't like it either. "Advertiser-supplied content, whether in print or online, should not look like editorial content," said society CEO Sid Holt. "This is a bedrock principle, clearly stated in the ASME Guidelines for Editors and Publishers. ASME's new Best Practices for Digital Media will underscore the point."

"If the SAP page is a paid ad," he added, "it violates that principle." The society's board will vote on the new digital guidelines at its meeting Dec. 1.

No reader confusion
Forbes said the various markers ensured that no readers would be confused. "The SAP Forbes Advoice is clearly identified as Forbes AdVoice in large type with a tab next to it explaining what AdVoice is: a message from marketers to the Forbes audience," a spokeswoman said. "It has a line underneath highlighting it. The blog is clearly identified as being written by an author from SAP. There is not one part of this that is not transparent and does not clearly identify this as an AdVoice product."

SAP said the blog was an attempt to communicate with an important audience -- and is properly distinguished from staff posts. "The Forbes AdVoice program provides a new social platform for SAP thought leaders to share ideas and interact with a core audience of technology and business decision makers about topics that are relevant to helping businesses run better," said Susan Popper, senior VP for SAP Global Integrated Marketing Communications. "The SAP content is labeled to indicate that the information has been written, edited, and produced by SAP."

Lewis DVorkin's influence
Forbes started selling sponsored blogs after it bought True/Slant, a blogging site where CEO Lewis DVorkin had a similar vision. Mr. DVorkin became chief product officer at Forbes Media, where he set about redesigning the magazine and the website -- as well as pitching blogs to marketers that would presumably be more enticed by posting on Forbes than on True/Slant site.

Beyond their appearance on the site, the way sponsored blog posts look as they surface in search results for a given subject will also be important. The Forbes site is excellent at search engine optimization, which will appeal to marketers considering the AdVoice blogs, but web surfers will want to know a search result is a paid post before they click. If they click through looking for Forbes' take, only to find a marketer's opinion, search results pointing to Forbes could become less attractive to them in the future.

The marketer blog looks too much like Forbes' staffers blogs, but Forbes isn't doing anything that publishers haven't done many times in print, according to one observer. "I would call it bad practice, but Forbes has lot of company," said Rick Edmonds, media business analyst at the Poynter Institute. "Properly labeling ad supplements has been as issue for decades in the magazine business as various publishers tiptoe up to the edge and over the guidlines set by ASME editors."