Tarana Burke was plucked from relative obscurity when her Me Too movement—founded in 2006 to help women of color who are survivors of sexual violence—went viral in the wake of sexual assault allegations against Harvey Weinstein. The plight of women in Hollywood, symbolized by #MeToo, galvanized a global response in a way that the suffering of girls and women of color had not. 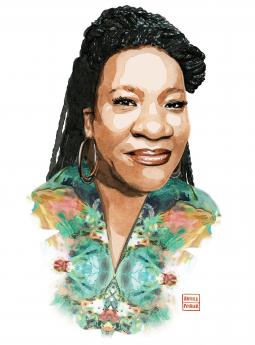 Since then, Burke has become a much-sought-after speaker and organizer, shepherding the movement toward greater inclusion and helping to facilitate a worldwide conversation about recovery, consent, toxic masculinity and systemic misogyny. In 2017, she and other "Silence Breakers" were named Time's Person of the Year.

At the Sundance Film Festival last month, Burke and Me Too released a series of animated PSAs created by Deutsch in which survivors of sexual assault share their stories. "Brooklyn Nine-Nine" actor Terry Crews tells of how he decided to speak up about his assault only after seeing women ridiculed online for telling their own. "I would have felt like a fraud" by keeping quiet, he says. Daniela Contreras, a then-undocumented immigrant assaulted by her employer when she was 16; Anonymous, a survivor of child sexual assault; and Emily Waters, a survivor of intimate partner violence, also recount their paths out of darkness.

Burke recently spoke with Ad Age about the PSAs, #MeToo in its second year and her ongoing efforts to make space in the movement for every survivor's voice. Our conversation has been edited and condensed.

Me Too went viral in 2017 despite  having been around for a decade. What did you take away from that?

Let's talk about the PSAs. You're connected with one of the most visible hashtags in the world. Why did you decide to use a traditional medium?

We're such a digital, visible culture. These PSAs can do in two minutes apiece what I can't do giving speeches all over the country.

And these videos are beautiful, right? Even more than the traditional talking heads situation, where you have a black background and dramatic music and then the person telling the sad story. These are visually just more appealing, so people want to see what's happening here.

I spend the majority of my time in conversation with survivors or supporters every day, so I had a better idea of how they needed to be supported and what they were looking for.

The films feature more than just women and white celebrities. Why did you choose a wider range of survivors?

There's been so much coverage of the women who came forward from Hollywood or of the people who were accused. But Me Too became a viral sensation because actual people said, "Me too." And then those people's stories were subsequently not covered.

So you have Terry, for example. Yes, he's a celebrity, but he represents a male who was sexually assaulted. He also represents an ally and a bystander. A man inserting himself in the conversation in ways that move it along as opposed to impeding it.

Daniela represents an immigrant population. We're right in the middle of all of this political upheaval around immigration in our country. I think it's important to not just talk about immigrants like they're nameless, faceless people. For a person who experiences sexual violence and doesn't have the language to talk about it or to find resources—you already carry the shame of what happened to you, and to have the added layer of fear of being deported or arrested, it's unconscionable.

We could have easily chosen a trans person, a disabled person, a person from the military.

Did it make it easier for survivors to tell their stories knowing that they wouldn't be on camera?

I think that helped. But also, one of the things we explained to the people who participated was that this is not just blindly telling your story. This is not performing your pain for other people. This is talking about where this movement, and where your work around healing, has brought you.

What message do you want viewers who are not survivors to take away from these videos?

If something doesn't affect you directly, you're not invested in it. You don't have a real understanding of what it is, and it was clear to me that the world doesn't really understand what it is to survive. But when you listen to Anonymous in the PSA talk about writing the letter and having that conversation with his father, you pay attention to that. I think we want people who are not survivors to build up that empathetic muscle towards people who are, so that when they're making decisions that impact our lives, they're doing that with more information than they had before.

Are there plans to continue the series?

It would be great to do something similar, but we're still riding high off of this one. I think that even people who are not identified specifically in the PSAs feel more seen because it's a different demographic than what they've been seeing.

So being more inclusive, no matter who you are being inclusive of, makes the movement more welcoming to all different kinds of people.

Absolutely. What you see when you look at the Me Too movement up close and personal is incredible diversity, just such a broad spectrum of people who are not only saying "me too," but who are doing the work to end sexual violence. It's already deeply inclusive. It just hasn't been reflected in pop culture and in mainstream media.

What issue do you think is flying under the radar that, when it finally comes to people's attention, we'll all wonder why we weren't talking about it?

Oh my gosh. I mean, there are so many. I think sex trafficking is a pervasive issue in this country. And I don't know that folks understand it, because we probably think of some poor girls from other countries being shoved into a bus or a van, or you think about girls being snatched off the street and forced into sex slavery. But sex trafficking happens every day in front of our faces. We're talking about kids who go to school every day and then are forced into selling their bodies at night. The problem is right in front of us and we're not seeing it.

What is it like to be considered the spokesperson for a global movement?

It is certainly a position I'm grateful to have, that kind of influence. But we tend figure out one person who is the "it" person for the movement. A year and a half ago nobody would've cared about my opinion. The lesson should be that there are lots of people out here who aren't famous, who are just working hard in their communities trying to make a difference. We should be figuring out what they have to say, and not keep trying to find the singular representative of a whole movement.