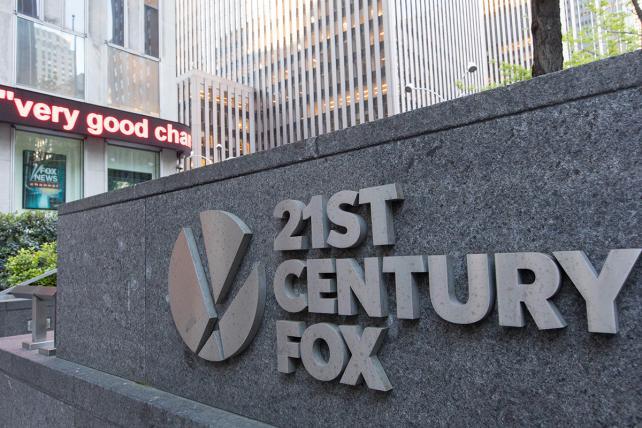 21st Century Fox shareholders approved the sale of the company's entertainment assets to Walt Disney Co. Friday, moving one of the biggest media mergers in history nearer to completion.

Both companies' investors gave their blessings to the $71.3 billion transaction in separate votes at the New York Hilton Midtown in Manhattan. It's expected to close in the first half of next year, according to Fox. Upon completion, a new Fox will emerge focused on broadcast TV, sports and the Fox News Channel.

Neither of the two companies' leaders made an appearance. Fewer than 70 people showed for the Fox meeting, which was run by General Counsel Gerson Zweifach. One shareholder read an ode to Fox's executive chairman. "Nobody does it like Rupert Murdoch," he said. "I love Rupert Murdoch."

At the Disney meeting, General Counsel Alan Braverman and Chief Financial Officer Christine McCarthy ran the show, although the main architect of the merger, Disney's direct-to-consumer division chief Kevin Mayer, was there. Some 99% of Disney investors who voted approved the deal. During a brief question and answer period, one said Disney overpaid by as much as $10 billion. The meeting lasted less than 10 minutes.

Disney Chief Executive Officer Robert Iger now must turn his attention to the deal's many loose ends -- to consummate the merger and prepare his company for life afterward. Below is a look at some of his remaining challenges:

To win regulatory approval in the U.S., Disney has agreed to divest Fox's 22 regional sports channels. The company already owns ESPN, the biggest sports network. Bidders for the properties, which could fetch as much as $20 billion, may include companies backed by cable billionaire John Malone, private equity and regional broadcasters.

Some analysts also see the possibility that Iger will look to cut a deal with Comcast over that company's 30% interest in Hulu. When the Fox deal closes, Disney will become the majority owner of the video-streaming service.

Although Comcast said last week it won't continue bidding for Fox's assets, the Philadelphia-based cable TV giant has the highest offer on the table for British satellite-TV provider Sky Plc at $34 billion. Disney is acquiring 39% of Sky through the deal with Fox and still technically has a bid on the table for the broadcaster.

Some analysts have suggested Iger may cede Sky to Comcast, freeing Disney from the $19 billion or so it would take to purchase the rest of the business.

Disney has pledged to generate $2 billion in cost savings as a result of the merger, which will unite two of the six largest Hollywood studios.

That's created a lot of angst at Fox and Disney, where overlapping marketing, ad sales and distribution departments at their respective film and TV units could lead to hundreds if not thousands of job cuts. Fox had 21,700 employees at year-end, according to data compiled by Bloomberg, while Disney has 199,000.

Disney has dominated the worldwide box office in recent years, thanks the string of hits from Marvel, Pixar and "Star Wars." Post-Fox, Disney studio chief Alan Horn will have to make choices about which newly acquired franchises to greenlight, including "Avatar," "Planet of the Apes" and "Alien," all of which could also be ripe for expanded merchandise and theme-park attractions.

Fox has produced several movies based on characters licensed from Marvel, including the X-Men and Wolverine pictures and two "Deadpool" movies. Those rights will come back to Disney with the merger.

Disney has received clearance to buy the Fox assets from the U.S. Justice Department, but was also awaiting the approval of the Federal Communications Commission.

In addition, the company said in a recent filing it may need consent from regulators in 14 countries and the European Union.