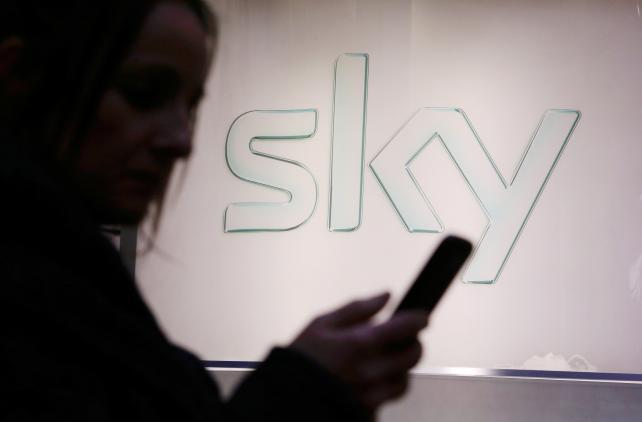 Fox, which already holds a 39% stake in Sky, proposed acquiring the rest for 10.75 pounds a share, according to a filing Friday in the U.K., a premium of 36% over Thursday's closing price. The bid revives a 2010 deal that was derailed amid a phone-hacking scandal at Murdoch newspapers.

Gaining total ownership of Sky would give Fox, which owns cable networks including FX and Nat Geo, a powerful distribution platform in Europe for pay TV and internet. Sky, Europe's top pay-TV company, provides service to 21.8 million customers across the U.K., Ireland, Italy, Austria and Germany. A deal would marry the global content business of 21st Century Fox with Sky's direct-to-consumer capabilities, Fox said in a statement.

"It would also enhance Sky's leading position in entertainment and sport, and reinforce the U.K.'s standing as a top global hub for content generation and technological innovation," the statement from Fox said.

The deal was reached between independent directors of both boards, though other elements of the transaction remain under discussion, and there's no certainty an official offer will be made by Fox, London-based Sky said.

Fox is looking to boost its earnings with the acquisition, according to a person familiar with the matter.

The drop in the pound relative to the dollar, driven by the U.K's June vote to leave the European Union, also served as a catalyst by reducing the cost to Fox, said two people familiar, who asked not to be identified discussing confidential information. Fox made the approach four days ago, said one of the people.

Sky shares closed in London at 10 pounds, a 7% discount to the offer, suggesting some investors are skeptical a deal will be completed. Fox fell 3.4% to $27.66 at 1:18 p.m. in New York, after rising as much as 6.2%. The offer premium is high enough that shareholders are likely to accept it, Ian Whittaker, an analyst at Liberum Capital Ltd. in London, wrote in a research note.

Mr. Murdoch's former son-in-law Crispin Odey, a Sky shareholder who opposed the company's plans to enlarge its stake in Sky Deutschland, gave his approval to the bid price from Fox. Mr. Odey said Sky's business may be weaker than understood by the markets as Sky is not giving as many of its so-called key performance indicators as some investors would like, making it harder to gauge the company's performance.

"Sky has stopped releasing so much in the form of KPIs to show how it is doing that I will be glad to get rid of the shares," said Mr. Odey, founding partner and portfolio manager of Odey Asset Management, in a phone interview. "We just can't work out how they are doing."

The satellite provider has staved off competition from phone and cable companies in part by securing rights to exclusive programming, such as sports and HBO shows, along with original content. The company has paid record sums to air Premier League matches and keep ahead of BT Group, which also broadcasts some of the league's games. While Sky held on to most matches, viewers were down this year as of mid-November, and there's no guarantee the outlay will prevent subscriber losses.

Mr. Murdoch has long made clear his desire to own all of Sky. He was thwarted in a 2010 attempt to buy out other shareholders for 7.8 billion pounds. The proposal was derailed by revelations that two of his newspapers hacked into the mobile phones of celebrities and politicians. Mr. Murdoch was bound to take another run at Sky, said Mark Lewis, a lawyer who represented the family of Milly Dowler, a murdered schoolgirl whose hacked phone became a central part of the scandal.

"There are three things in life that are inevitable," Mr. Lewis said. "Death, taxes, and Rupert Murdoch taking over Sky."

The deal will have to clear regulatory reviews in Europe, and one issue that could be considered by regulators is the extent to which Fox News and Sky News are both carried throughout Europe. Fox will need to clarify whether it intends to go forward with an offer by Jan. 6, according to U.K. takeover rules, Sky said.

With the cost of sports rights rising, Sky's operating margins have fallen for four straight years. In the 2011-2012 season, Sky was paying 4.7 million pounds ($5.8 million) per game. Now, Sky is paying 11.07 million pounds per game. Still, Sky's earnings before interest, taxes, depreciation and amortization have been growing and the company has generated 1.5 billion pounds or more in Ebidta annually for the last five years.

Content, distribution, power
Mr. Murdoch's attempt to put TV programming and distribution under one roof follows AT&T's $85.4 billion deal earlier this year to acquire Time Warner. Both transactions are likely to face heavy scrutiny from regulators who may seek to ensure that the companies don't prioritize their own networks' content over competitors'.

Britain's Department for Culture, Media and Sport, which has responsibility over media takeovers, is aware of the proposed deal but won't make any official comment at this stage because the issue is sensitive, a person familiar with the government's thinking said, asking not to be identified. Ofcom, the communications regulator, didn't immediately have a comment when reached.

The prospect of a Fox approach has spurred complaints over corporate governance at Sky, where Mr. Murdoch's son James is chairman. Some investors have raised concerns about whether they would get a fair shake if 21st Century Fox, which the 43-year-old James Murdoch leads as CEO, were to seek a merger. James Murdoch previously ran Sky as CEO from 2003 to 2007.

More than 28% of votes cast at the Sky's annual meeting in October opposed Murdoch's re-election to the board. Excluding votes representing Murdoch interests, about 51% were against James Murdoch's re-election, according to Manifest, a London-based proxy voting agency that has raised governance concerns about his role.

Sky has formed an independent committee of the board, excluding James Murdoch, to consider the deal with Fox, it said in the statement. Each of the eight directors on the committee are considered free from conflicts of interest.

The committee of Sky's board is being advised by Morgan Stanley, PJT Partners and Barclays. Fox was advised by Deutsche Bank.