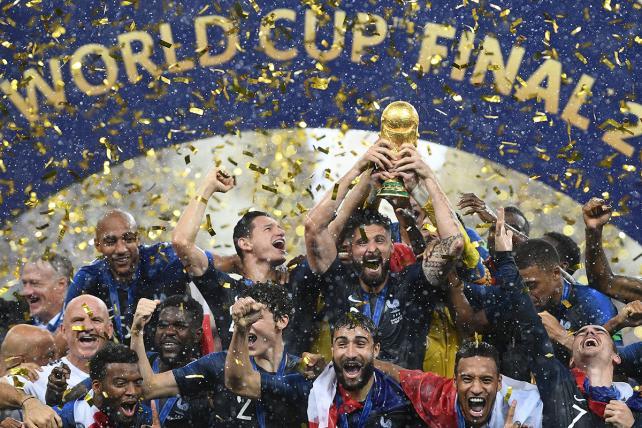 France's players hold their World Cup trophy as they celebrate their win during the trophy ceremony at the end of the Russia 2018 World Cup final football match between France and Croatia at the Luzhniki Stadium in Moscow on July 15, 2018.
Credit: FRANCK FIFE/AFP/Getty Images

Millions of people watched the World Cup from the comfort of their own homes. Millions also watched at bars, hotels, restaurants or at a friend's house -- enough to boost the overall viewership by 21 percent, Fox said, citing research by Nielsen.

Measuring the audience that watches on someone else's screen is increasingly important to networks that depend on delivering viewers to advertisers, and to the sports leagues that rely on TV deals, even as their broadcast ratings decline.

The World Cup numbers show advertisers' most desirable audience -- 20- and 30-somethings -- were more likely than other groups to watch in a social setting. Among 18- to 34-year-olds, out-of-home viewing boosted the audience by 28 percent.

Advertisers often complain that people watching in bars and restaurants aren't paying attention to commercials. Fox, however, says that only 25 percent of its out-of-home World Cup viewing occurred in bars and restaurants. Most of the audience watched in places like someone else's house, their office or at the gym.

The biggest out-of-home bump was registered during the semifinal matches, which were played on a Tuesday and Wednesday. Among 18- to 34-year-olds, the England-Croatia match boosted the audience by 51 percent. The other semifinal got a 46 percent increase.

Weekday afternoon matches got a 30 percent boost overall, Fox said, when many people are at work. Not unexpectedly, the window least affected by out-of-home viewing was weekend early morning, which saw a 12 percent bump.

The network's overall ratings were down across the 64-match, monthlong tournament in Russia relative to the last World Cup, hosted by Brazil in 2014. Fox and its cable network Fox Sports 1 trailed ESPN and ABC's 2014 average viewership by 29 percent.

The network said it expected such a dip. Most of the games were played during the U.S. workday, and the American team failed to qualify for the quadrennial event. The World Cup ended on July 15, and Fox received the out-of-home viewing statistics this week.

"From a revenue generation standpoint, this World Cup and this World Cup cycle exceeded our expectations," Fox Sports President Eric Shanks said, declining to be specific. "We're on track over the whole course of the contract to be ahead."

The network now looks ahead to the 2022 World Cup in Qatar. Three years ago, FIFA moved the tournament from summer to fall to avoid the extreme heat. The change puts the World Cup in the middle of a busy time in the U.S. sports calendar, with the NFL, NBA and college football all in full swing, instead during a summer lull. For Fox, which carries NFL and college football games, the specifics of the schedule will be critical in determining whether the Qatar World Cup complements or conflicts with its other programming.