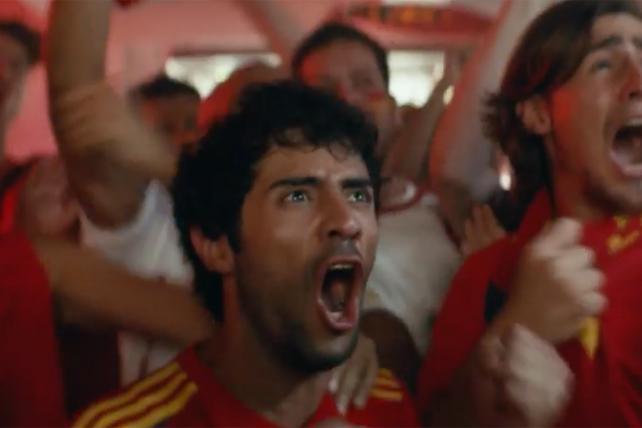 When the U.S. men's team turfed out in the qualifying round of the 2018 FIFA World Cup, many stateside soccer fans were left without a primary rooting interest in the summer tournament. But as part of an inspired marketing initiative, Fox Sports and the genetic-research firm 23andMe are teaming up to help soccer enthusiasts select a squad that represents their ancestral origins.

Set to launch Thursday on the FS1 program "The Herd with Colin Cowherd," the 30-second "Root for Your Roots" spot features the exploits of international stars Cristiano Ronaldo (Portugal), Lionel Messi (Argentina) and Neymar (Brazil) as they're cheered on by their supporters.

"You're connected to the World Cup," the spot's narrator intones, as the montage of athletes and aficionados unspools. "You may not speak the language or have visited the country, you may not know their heroes, but we're all connected to a World Cup nation through our DNA."

The spot closes with a tune-in reminder and a call to action: "This summer, root for your roots. Watch the FIFA World Cup on Fox and let Fox broadcast sponsor, 23andMe, help you find your team."

The "Root for Your Roots" campaign was cooked up by Wieden & Kennedy New York late last summer as a contingency plan in the event the U.S. team failed to book passage to Russia. Wieden's initial idea was to target the millions of Americans who don't know where their family tree was originally planted.

According to Robert Gottlieb, executive vP of marketing, Fox Sports, the broadcaster's in-house research discovered that 58 percent of fans who could not pinpoint their ancestral origins said they would watch more of the World Cup tourney if they did know from whence they came.

Then it was a matter of getting 23andMe onboard with the idea.

"Wieden early in the process pitched this as a Plan B stem," Gottlieb says. "We thought it might be a bit of a tough sell, but we approached 23andMe with the idea and they basically said 'yes' in the room."

After the "Root for Your Roots" spot bows on today's "The Herd" (it is scheduled to air sometime during the 2 p.m.-2:30 p.m. segment), it will pop up in other FS1/FS2 programming before making the jump this Saturday to Fox's regional sports networks and the broadcast flagship. The new spot is slated to air during Fox's April 7 afternoon broadcast of "UFC's Road to the Octagon" and in the network's subsequent coverage of the Nascar Xfinity Series race from Fort Worth, Texas. From there, the ad will begin appearing in off-network slots, including a high-profile run in TNT's April 10 NBA doubleheader (Celtics at Wizards, Rockets at Lakers).

An array of digital, social and out-of-home executions is in the works, and specially branded in-store display units will appear in Best Buy stores.

"On average, 23andMe customers find at least five different regions from around the world in their DNA," says Tracy Keim, VP of Consumer Marketing at 23andMe. "We hope this collaboration becomes a new way for people to experience global events like the World Cup."

Fox's coverage of the 2018 FIFA World Cup kicks off on Thursday, June 14 with a match between home squad Russia and Saudi Arabia. Among the Group Stage matches of interest include the June 15 all-Iberia showdown between Spain and Portugal, an intriguing Mexico-Germany pairing on June 17 and the always rewarding clash of Nigeria and Argentina on June 26.