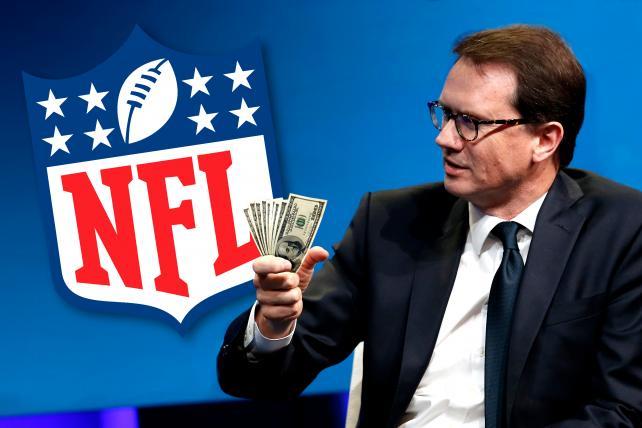 Fox on Tuesday confirmed that it has supplanted CBS and NBC as the broadcast partner of the NFL's "Thursday Night Football" package, inking a five-year deal sources say carries a hefty $3 billion price tag.

In picking up the rights to the second highest-rated program in primetime, Fox is on the hook to fork over some $600 million a year, or around $150 million more than CBS and NBC collectively paid out in each year of their joint contract with the league. And in a departure from the NFL's unofficial policy of doling out short-term leases on the Thursday night games, Fox's stewardship of the weeknight window will extend through 2022—which is when the existing Sunday afternoon and Sunday night deals are set to expire.

Under terms of the new pact, Fox will air 11 "Thursday Night Football" games each season, a format that effectively replicates last season's bifurcated broadcast package. The 11 Fox games will be simulcast on NFL Network and streamed by an as-yet unidentified digital player. (Facebook is said to have passed on the opportunity to bid on the streaming rights.)

As has been the case for the last four seasons, NFL Network will televise the remainder of the 18-game "TNF" package.

While the NFL required CBS and NBC to staff the "Thursday Night Football" booth with their lead broadcast teams (Jim Nantz and Tony Romo called this season's games for CBS, while "Sunday Night Football" linchpins Al Michaels and Cris Collinsworth did double-duty for NBC), no such demands are being made of Fox. A network insider on Tuesday morning said that it has not yet made a staffing decision, so at the moment there's no telling if Fox A-teamers Joe Buck and Troy Aikman will be pressed into service on Thursday nights.

But for Thursday, November 22, when Fox will air the late-afternoon Thanksgiving Day game from Dallas, the network's new NFL slate will air across consecutive weeks, stretching from Week 4 of the 2018 season through Week 15.

As an extra incentive, Fox now will have the rights to distribute both "Thursday Night Football" and its Sunday afternoon games over a number of different digital platforms, including mobile phones.

As has been the case with all NFL windows, "Thursday Night Football" over the past few seasons has taken a hit in the Nielsen ratings. Last season, NBC's share of "TNF" games averaged 14.1 million viewers, which marked a 17 percent drop compared to the year-ago results, while its 8.2 household rating was down 20 percent. The CBS package was more steady; per Nielsen, the network's average draw of 14.1 million viewers and an 8.6 household rating represented a 4 percent dip versus its 2016 "TNF" deliveries.

Back in 2014, when the NFL first introduced the Thursday night broadcast window, CBS's eight-game lineup averaged 16.8 million viewers and a 10.4 household rating.

When broken down by discrete TV windows, "TNF" is the third most-watched, highest-rated NFL showcase, trailing only the late national Sunday afternoon blockbuster on CBS and Fox and NBC's "Sunday Night Football."

While Fox is ponying up a goodly sum for its new NFL parcel—sources say that CBS and NBC both put in lower bids than they did two years ago—the strategy offers the network the best shot at building on the successes of this season's "Own the Fall" initiative. The addition of a top-tier sports rights package also suggests that Fox is prepared to depend far less on general-entertainment programming if and when its $52.4 billion sale of studio and cable network assets to Walt Disney Co. wraps.

Speaking of Disney, the Mouse's broadcasting arm, ABC, ultimately decided against making a bid for the rights to the revenue-shredding "Thursday Night Football" package. back in November, CBS Sports chairman Sean McManus suggested that the network's Thursday night commitment was losing its luster, noting that the additional primetime games seemed to be contributing to the dilution of enthusiasm for the traditional Sunday broadcasts. Meanwhile, at least one Wall Street analyst who'd crunched the numbers told investors that the ad sales revenue sucked in by "TNF" didn't offset the price of the rights fees and the costs of producing the games.

"Football is in our blood … and we understand that nothing beats the NFL when it comes to television that captures people's attention," said Peter Rice, president of 21st Century Fox, in a statement released Tuesday morning. "Our historic relationship with the NFL dates back to the earliest days of Fox, and we couldn't be more excited to expand our deep and enduring partnership to include primetime games on Thursday night."

The agreement was officially announced by Rice and NFL commissioner Roger Goodell.