Inventory Being Gobbled Up by Auto, Insurance and Fast-Food Brands
READ THIS NEXT
Netflix results suggest pandemic streaming boom is waning 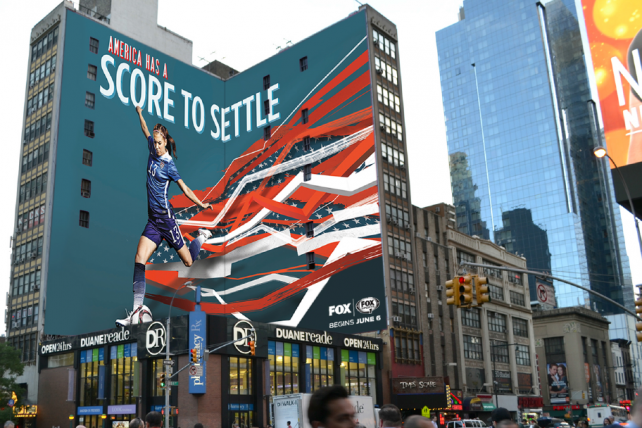 The U.S. team's Alex Morgan on a billboard in New York.
Credit:

A powerhouse U.S. squad, a surge of interest in soccer and a viewer-friendly time-zone arrangement have conspired to help Fox get off to a fast start on sales of its ad inventory in and around the 2015 FIFA Women's World Cup.

According to Neil Mulcahy, exec VP-sales at Fox Sports Media Group, enthusiasm for this summer's soccer tournament is unprecedented, as inventory is being gobbled up by automotive, QSR, movies and insurance brands.

"Not since we had the Bowl Championship Series have we had such a fun time selling something," Mr. Mulcahy said. "The Women's World Cup has all the attributes everyone's looking for: live viewing, the engagement that comes with big-time sports and time zones that match up with our own."

Thus far, more than 20 advertisers have signed on as sponsors of the quadrennial spectacle, which kicks off in Edmonton's Commonwealth Stadium on Saturday, June 6. In the opening match, the host nation Canada squares off against China on Fox Sports 1.

Among some of the more visible advertisers that will be on hand throughout the month-long WWC are Nationwide and Fiat. Nationwide will serve as the pre-game sponsor of each of the 52 matches, of which 16 will air on the Fox broadcast network.

Mike Petruzzi, Fox Sports VP of ad sales, said the network has landed Fiat as the sponsor of its nightly recap, "World Cup Tonight," but is still looking for a marketer to make a similar stake in its bridge show.

The Fox Sports ad sales execs spoke to Ad Age before the U.S. Dept. of Justice handed down 14 indictments to FIFA officials and sports marketing execs in a sting designed to bring down an alleged $150 million bribery/kickbacks scheme. Fox would not offer comment further on the greater FIFA issue, but buyers said there have been no indications that secured sponsors had any inclination to cancel or otherwise pull back on their commitments to the WWC.

While Fox did not disclose what Nationwide and Fiat were spending on their respective investments, buyers who steered clients to the 2011 WWC on ESPN estimated that the asking price for a high-profile sponsorship could go as high as $8.5 million.

Mr. Petruzzi said that some "non-traditional" players (grooming and personal-care brands, essentially) owned by Unilever and Procter & Gamble also have bought time in and around the WWC. He added that Fox has had "great success" in lining up the support of many of the 15 official sponsors of U.S. Soccer, a group that includes snack giant Mondelēz, Budweiser, Coca-Cola, Chevrolet and Johnson & Johnson.

Because there are no commercial breaks in soccer -- a seeming aberration that for years made American broadcasters all but allergic to the sport -- 30-second spots tend to air before the performance of the national anthems, at halftime and during the interval between the final whistle and the highlights/recap show. All told, you'll rarely see more than 20 spots per hour, and that clutter-free environment commands a premium.

Given the U.S. Women's team's No. 1 global ranking, the potential for a huge ratings spike during the July 5 final is never far from Mr. Mulcahy's mind. (Team USA's penalty-kick shootout victory over China in 1999 drew 18 million viewers.)

"When they get out of the group stage, that's when things will really pick up from a ratings standpoint," Mr. Mulcahy said. But don't expect a cakewalk. "If there were a 'Group of Death' in the Women's World Cup, the U.S. would be in it," Mr. Petruzzi cautioned.

The marketing effort officially began in October, when U.S. stars Abby Wambach and Sydney Leroux joined Joe Buck and the rest of the Fox Sports crew in the booth during Game 6 of the 2014 World Series. But the hype machine really kicked into high gear on Jan. 18, when Fox rolled out the first 30-second WWC spot during its post-game coverage of the NFC Championship Game. At the time the "Two Stars" promo ran, nearly 60 million Americans were tuned in to Fox.

Since then, Fox has splashed members of the U.S. team across multiple tent poles, including the Daytona 500, "American Idol" and "The Simpsons." "We've treated this as a big summer film release," said Robert Gottlieb exec VP-marketing, Fox Sports Media Group. "The long lead time of the campaign echoes the rhythms of what you'd see in the run-up to the opening weekend of a blockbuster."

Fox is supplementing its own in-house promotion with a national TV buy across four male-skewing cable networks (Discovery Channel, History, Comedy Central, Spike). And in the final days leading up to the start of the WWC, the network will air a co-branded spot for Marvel's upcoming "Fantastic Four reboot that will feature members of Team USA and another promo that piggybacks onto the June 12 release of "Jurassic World."

Lastly, New Yorkers should keep their eyes peeled for a pair of gargantuan billboards that are set to go up near the Port Authority and in Times Square. The 10-storey banners read, "America Has a Score to Settle" and feature U.S. forward Alex Morgan.