NBC, ABC and even William Morris sat out the upfront party circuit this year, but even in a recession, Upfront Week still hosted soirees on par with years past. Freeloader hit them all up this year (even the exclusive CW bash -- shhh!) and is proud to report there was not one cocktail shrimp to be found. In honor of that dearly departed upfront canape, we rank this year's bashes based on a scale of 1 to 10 shrimp.

The scene at the Fox Upfront party at Wollman Rink.
The Network: Fox
Date: Monday, May 18
The Venue: Wollman Rink
Food and Drink: Exhibiting traditional upfront excess, Fox had food and booze available at every corner, and with impressive variety. Three branded drinks made the rounds (Freeloader's fave: the "So Refreshing," a mojito-ish cocktail with acai and cucumber), while different food stations covered all the bases: burgers and fries, sushi, pasta and a dessert bar with ice cream cones and sandwiches. Thank goodness we had the rest of the week to work it all off...
Crowd Control: Crowded to un-navigable as the night wore on, with groups continuing to pour in at five-minute intervals.
Celeb Access: As per previous years, Fox had photo stations for partygoers to snap their picture with top talent like Wanda Sykes, Kiefer Sutherland and the casts of "Fringe" and "House."
Overall Score: 8 shrimp

The Network: Turner Entertainment
Date: Wednesday, May 20
The Venue: Del Posto
Food and Drink: Expertly selected white and red wines for those who chose to imbibe during the mid-day lunch. The food was the real draw, however, at one of Mario Batali's swankiest restaurants. A spinach salad with flavorful vinaigrette kicked off the three-course lunch, followed by decadent pesto pasta and a choice of grilled chicken or halibut. For a meal that would normally cost upward of $60 per person, this was the value of the week.
Crowd Control: It was a private lunch where the only people were fellow journalists and A-list celebrities from TNT's and TBS' new shows. No complaints here.
Celeb Access: Optimal. Where else can you and seven other people per table have an intimate lunch conversation with the likes of Kyra Sedgwick, Holly Hunter, Will Smith and Jada Pinkett Smith, Tyler Perry, Ray Romano, Jerry Bruckheimer, Jeffrey Katzenberg, Dylan McDermott, Michael Vartan and Mark-Paul Gosselaar, among many others?
Overall Score: 10 shrimp 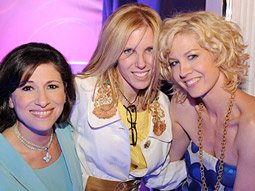 Nina Tassler, president, CBS Entertainment (left), poses for a photo with Jenna Elfman (right) and executive producer Claudia Lonow.
The Network: CBS
Date: Wednesday, May 20
The Venue: Terminal 5
Food and Drink: The three-tiered rock club included a dumpling station, cater-waitered hors d'oeuvres like mini-burgers as well as an upstairs station with chicken, bread salad and vegetables. Fully stocked open bars could be found throughout the venue as well.
Crowd Control: Crowded, hot and loud. You had to keep walking to find areas with a cool breeze, and you weren't be able to have a proper conversation in most parts of the club.
Celeb Access: There appeared to be a VIP room on the third floor of the club, where Jenna Elfman and "Mentalist" star Simon Baker were spotted, but frankly, we were too tired from walking up and down stairs to do too much more investigating.
Overall Score: 4 shrimp

The Network: Adult Swim
The Date: Wednesday, May 20
The Venue: Nokia Theater
Food and Drink: The party's carnival theme offered up a college-friendly menu of pizza, corn dogs and cotton candy, with buckets of Pabst Blue Ribbon making the rounds (complete with swirly straws!) and an open liquor bar for the more sophisticated tastes.
Crowd Control: There were enough Adult Swim-branded games to keep people congregating in one cramped room, but by the time musical guest T-Pain took the stage the elbow room was comparable to a really popular frat party.
Celeb Access: Minimal, but T-Pain did bring out popular rap-rock band (and Adult Swim co-stars) Gym Class Heroes for a few numbers, which got the junior media buyers howling like a pep rally.
Overall Score: 9 shrimp

The Network: The CW
Date: Thursday, May 21
The Venue: Gramercy Park Hotel
Food and Drink: Mojitos, wine and champagne were plentiful and passed around frequently, so there was nary a drinkless hand in the house. A three-part menu kicked off with hors d'oeuvres like tuna tartare and prosciutto-wrapped breadsticks, followed by a buffet of grilled seafood, pasta and vegetables, topped off by dessert trays containing pint-sized strawberry shortcakes and red velvet cupcakes.
Crowd Control: Favorable. The low-key party was invite-only, and mostly populated by the casts of the CW's "Gossip Girl," "Melrose Place" and "The Beautiful Place," as well as key network executives like Les Moonves and Dawn Ostroff.
Celeb Access: The Gramercy Park Hotel's intimate rooftop party suite lends itself well to celebrity encounters, particularly while waiting in line for its limited bathrooms. "Gossip Girl" stars Ed Westwick, Jessica Szohr, Taylor Momsen and Connor Paolo all graciously posed for photos with young media buyers, as did "Melrose Place" star Ashlee Simpson, who had rocker husband Pete Wentz in tow.
Overall Score: 8 shrimp