Gawker.com to Shut Down After Univision Deal | Ad Age
Skip to main content

Gawker.com to Shut Down After Univision Deal

Nick Denton Told Staff the Site Will Close Next Week 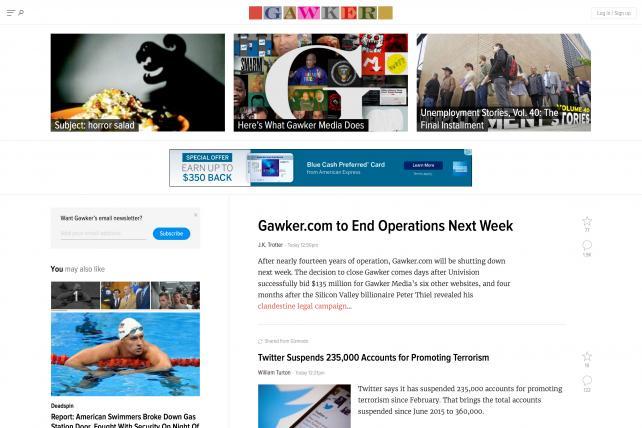 Gawker.com is shutting down, marking the final chapter for a pioneer in online media and one of the most controversial publishers on the web.

Nick Denton, the founder of Gawker Media, told the site's staff that it will end operations next week, according to a post on its website. It's unclear whether Gawker.com's archives will still be available, it said.

Earlier this week Univision Holdings made the winning $135 million bid to acquire Gawker Media, which also published the sports website Deadspin, the women's site Jezebel, the tech site Gizmodo and others. The company was driven into bankruptcy in June after losing an invasion-of-privacy lawsuit to Hulk Hogan.

Oxford University-educated Mr. Denton started Gawker.com out of his New York apartment in 2002 with the stated mission of putting "truths on the internet." That often meant pursuing stories about powerful figures in media and entertainment that other news outlets wouldn't touch. The site also became an early training ground for many young journalists.

Univision is expected to use Gawker's websites to bolster its growing digital footprint, which includes the websites the Root, the Onion and A.V. Club.

In a statement this week after the auction, Mr. Denton said he was "pleased that our employees are protected and will continue their work under new ownership -- disentangled from the legal campaign against the company. We could not have picked an acquirer more devoted to vibrant journalism."

Gawker's aggressive approach was often controversial. Last year, it removed a story from its website alleging that a Conde Nast executive tried to arrange a meeting with an escort. Mr. Denton said the story was true but he regretted publishing it because its point didn't "offset the embarrassment to the subject and his family." Mr. Denton later told staff Gawker needed to be "10 to 15% nicer." And last fall, Gawker said it decided to retool as a politics-focused website.

Gawker's ultimate undoing came when Mr. Hogan, whose real name is Terry Bollea, sued the publication for posting a tape showing him having sex with a friend's wife. He claimed Gawker cost him endorsements and inflicted emotional harm.

The company filed for bankruptcy on June 10, a move that temporarily put the brakes on Mr. Hogan's efforts to collect on the verdict.

Peter Thiel, the venture capitalist who co-founded PayPal and sits on the board of Facebook, made a financial contribution to Mr. Hogan's suit. He and Gawker have a feud that goes back almost a decade after another Gawker website, Valleywag, wrote a story outing Mr. Thiel as gay.

In a New York Times opinion column published this week, Mr. Thiel said, "I am proud to have contributed financial support to his case," adding that it's "ridiculous to claim that journalism requires indiscriminate access to private people's sex lives."

In a memo to staff a few weeks ago, Mr. Denton called Mr. Thiel's financial backing "a personal vendetta" and said it was "disturbing to live in a world in which a billionaire can bully journalists because he didn't like the coverage."