The Event: Gen Art's Fresh Faces in Fashion Runway Show
The Date: Sept. 9, 2011
The Venue: The Grand Ballroom at the Manhattan Center, New York, followed by an after-party at Midtown's 404.
The Crowd: Among celebrity guests Jaime King, Kelly Rutherford, Noa Tishby, Angela Simmons and former "Project Runway" contestants Jay McCarroll and Althea Harper were members of the fashion industry and media, friends and family of the featured designers and fashionistas who had fronted the cash to get tickets to the sold-out show.
The Host: Erika Christensen of "Parenthood" and "Traffic" fame.
The Food: Eating is so last year. No snacks were to be had, other than a pack of Justin's organic chocolate peanut butter cups in the swag bag.
The Drinks: Pharrell Williams' Qream Liqueur, Godiva Chocolate Infused Vodka, Voga Italian Wine and Jose Cuervo Platino Tequila.
The Swag: The aforementioned peanut-butter cups (delish, especially on a rumbling Fashion Week stomach) came in a bag also filled with Skinn by Dimitri James protein cleanser and nail polish, Beauty Addicts lip gloss, copies of New York Magazine and NewBeauty magazine and travel-size tubes of New York Streets shampoo and conditioner as well as Aveeno lotions and sunscreen. Sorry boys, this swag was heavily skewed toward the ladies.

While both Freeloader and Gen Art have been lying low recently (the former for her own health and the latter due to financial troubles and a company reorganization following Chapter 7 bankruptcy) the two met up during New York's Fashion Week for a runway event showcasing seven collections from talented young designers. Known for nurturing and launching the careers of emerging talent in film, fashion art and music, the experiential and event-marketing organization relaunched in February through an acquisition by Sandow Media. Fresh Faces in Fashion was Gen Art's first fashion-related event since its new ownership, and marked its collaboration with lead partner Smart Car, sibling company of Fashion Week sponsor Mercedes-Benz.

The featured designers (William Okpo, Ace & Jig, Sunghee Bang -- Freeloader's favorite -- Baron Wells, Eighteenth, Jennifer Chun and AnnYee) were able to put on their shows at no cost thanks to Gen Art's partners and sponsors, and the branding was in full force all night. Booths at the show venue featured installations from accessory designers Collina Estrada, Falconiere, Osborn and Wool and the Gang, who provided accessories for the designers to use in their shows. Also on display were tables of beauty products from Greek skincare brand Korres (which created the runway makeup looks) and Revitalash Advanced. Both Revitalish and Enamel Diction, a nail-polish company, sponsored sweepstakes. 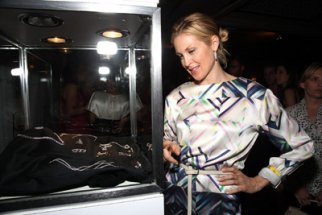 In addition to Smart Car, NewBeauty magazine and Platino Tequila, Gen Art linked with Palladium Alliance International as a lead partner to launch a competition encouraging up-and-coming accessory designers to create a collection made out of the rare metal, with the winner's line will be featured in a national ad campaign, put into production and sold. Freeloader had previously never heard of the silvery-white metal, which is part of the platinum family, but less dense. PAI recently began a national ad campaign with Pamela Anderson, Kelly Osbourne, and Rose McGowan as the faces of the metal. Strange, it seems as though no baubles were included in Freeloader's swag bag.

While the runway show did not disappoint -- this is an organization that has launched the likes of Zac Posen and Phillip Lim -- the after-party was somewhat lacking. The crowd was asked to move locations to 404, an event space on 10th Avenue, and the five-minute walk and 20-minute wait outside to get in were a bit of a buzzkill. Inside, drinks were limited to Qream and Godiva-infused vodka on the rocks, and if attendees wanted something that didn't taste like it would put them in a diabetic coma, they had to stand in line for mojitos and martinis made with Jose Cuervo Platino. A 5-year-old girl dressed in a Minnie Mouse outfit and out way past her bedtime was the only one dancing to the iPod DJ's limited repertoire of indie rock and Top 40 tunes while the rest of the crowd found entertainment in designing personalized Smart Cars at kiosks provided by the car brand and by taking pictures in the several Smart Cars scattered around the main floor of the venue.

The partnership with Smart, Gen Art's first automotive partner since its relaunch, is a positive sign for the company, which previously partnered with Acura, said Gen Art Co-President Jeffrey Abramson. Mr. Abramson described the team-up as an "organic" one, and said he's encouraged that many brands have sought out the organization themselves, instead of them having to search for sponsors. Gen Art works with a number of agencies but also helps to create customized programs for brands, such as the current one with Smart.

The world of fashion is finicky but despite some stumbles last year, it looks like the new Gen Art is back with swagger.