Feeding Mouth That Bites It, G.E. Salutes '30 Rock' in Ads

General Electric is feeding the mouth that bites it -- or, at the very least, has nibbled on it from time to time. 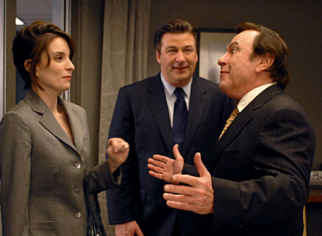 Over the course of seven seasons, NBC's "30 Rock" has poked fun at the venerable U.S. conglomerate, satirizing everything from the disposition of its executives (Alec Baldwin's Jack Donaghy character is a proud veteran of the company) to the problem of succession at one of America's most-influential corporations. And GE, apparently, has loved it.

"G.E., G.E. employees and G.E. executives have laughed for the last seven years along with the rest of the audience," said Linda Boff, G.E.'s global director of brand management. As the show neared its series finale -- set to air in a "double episode" on NBC on Jan. 31 -- General Electric saw the moment as one worth seizing, she said. Under a deal secured around the end of 2012, G.E. is running a TV ad saluting the program in its last few weeks and then curating the company's "favorite moments" online at NBC's "30 Rock" site through the end of February.

The move isn't the normal one. Advertisers typically shy away from programming that makes fun of them or their products. Indeed, in some advertising circles, it's well known that Denny's stopped advertising on NBC for a period several years ago after the restaurant chain's executives walked into a Peacock upfront presentation and saw a joke made about the eatery.

But General Electric has a sense of humor about the whole thing, even if its status as a manufacturer of wind turbines, medical devices and aircraft engine components would suggest a stodgier attitude. "They've been having fun at our expense," said Ms. Boff. "And we said, 'Oh, let's turn it around, and kind of salute them.'"

Internal giggles have erupted around "30 Rock" for some time. When G.E. executive Mike Pilot was assigned to head up NBC Universal ad sales in late 2006, one of his first tokens of appreciation came from NBC staffers who gave him a framed picture of Mr. Baldwin as Jack Donaghy -- who happens to be sent to NBC after a successful stint overseeing General Electric's fictional microwave oven subsidiary. "Mike! Mike! Make me proud!" read an inscription from the actor written on the picture. Mr. Pilot has since returned to General Electric.

The "30 Rock" initiative is part of an emerging movement at General Electric to align promotional messages with content that is gaining popularity in a specific period of time, Ms. Boff said. "We want to be a brand that is focused on moments that are real -- 'moments of now' -- where there is both chatter on the 'first screen,'" or the TV set, she said, as well as activity on the digital "second and third screens, as people are sharing stuff."

"Media going forward needs to be about context, about 'real time,' about what I often say is 'going beyond eyeballs,'" Ms. Boff added. "It's not the most people, it's the right people."

Of course, it helps that G.E. is bound to spend money on NBC Universal properties as part of its agreement to sell Comcast a controlling stake in the company (yielding the series' fictional Kabletown). According to filings made with the U.S. Securities and Exchange Commission in January 2011, G.E. had agreed to buy at least $59 million worth of advertising per year with NBC Universal for five years starting in 2012. G.E. also had agreed to purchase $50 million worth of advertising related to NBC Universal's 2012 broadcast of the Olympic games. General Electric has long placed the bulk of its TV ad-spend on NBC Universal properties, with the idea being that the company wanted to support a business it owned.

The clever match between advertiser and content that satirizes it is just the latest in a series of unorthodox agreements NBC has helped create for "30 Rock" sponsors.

The show, which made its debut in the fall of 2006, has allowed marketers, including Verizon Wireless and Snapple, to place their products in the show -- while scripting jokes at the expense of product placement on TV. The creative team behind "30 Rock" also scripted a live episode in which Kraft Foods' cheese "singles" got a mention in a fictional "Kraft Product Placement Comedy Hour" and a promotional vignette in which recurring character Dr. Spaceman talked up the virtues of Dr Pepper.