Politico, the high-metabolism news site covering Beltway politics, will introduce a glossy, six-times-a-year magazine and companion section of its website next month, the company said Wednesday. 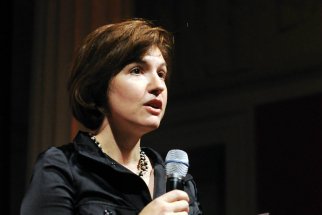 Unlike traditional publishers that rely on susbcriptions to build the large circulations that advertisers covet, Politico Magazine seems set to begin, at least, as a small, free-distribution affair aimed at influential readers. Politico said it will place 40,000 free copies of Politico Magazine around the Washington, D.C., area and in other, unspecified locations nationwide starting Nov. 15.

The magazine is not offering subscriptions, a spokeswoman said.

A new section of the Politico website featuring daily original content will go live Nov. 14. It will be free like the rest of the site, the spokeswoman said.

Bank of America is the sole advertiser of the online section this year. Ads from Bank of America and other organizations will appear in the print magazine, a Politico spokeswoman said.

In June, Politico announced its intentions to roll out a glossy magazine aimed at producing "deep, magazine-style journalism and in-the-moment opinion pieces." The company hired Susan Glasser, editor-in-chief of Foreign Policy, to lead the effort. She brought on several new staffers from the print magazine world and tapped Politico reporter Glenn Thrush as a senior staff writer for the magazine.

"The magazine will aim to set the agenda in a whole new way, untethered from the constraints of old newsmagazines," Ms. Glasser said in a statement on Wednesday. "We'll drive a vibrant, real-time conversation enriched by the country's best writers and thinkers, authors and experts on the subjects that animate politics and power in Washington and beyond."

Politico already publishes a print edition for every day Congress is in session and every Tuesday when it is not, distributing copies free around the D.C. area and offering to subscriptions for $200 a year. The addition of a glossy magazine is perhaps the site's boldest expansion since 2011, when it rolled out Politico Pro, a subscription news service covering specific industries, such as agriculture and trade, defense and education.

~ ~ ~
CORRECTION: An earlier version of this story said Bank of America is the sole advertiser for the first print issue.