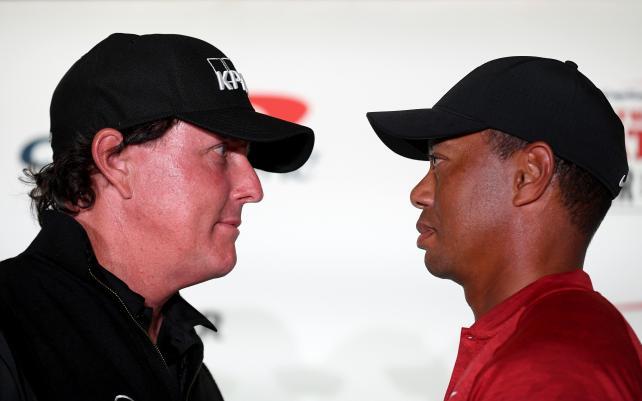 When AT&T announced in August that it had acquired the rights to a pay-per-view golf duel between Tiger Woods and Phil Mickelson on Thanksgiving weekend, its rechristened entertainment division—WarnerMedia—faced a challenge: how to create a golf event that would appeal beyond the sport's traditional followers.

"We have an obligation to the hardcore fan and the casual fan," said Craig Barry, chief content officer at Turner Sports, who oversaw the production. The goal, he said in an interview, was to find an inoffensive way to appeal to both.

Easier said than done. Golf viewers are the oldest demographic of any major U.S. sport, with an average age of 64 for PGA Tour events, according to research published last year in Sport Business Journal. But retirement-age duffers aren't the main prize for AT&T, which is using the match to flex new media muscles following its $85 billion purchase of Time Warner.

To please the younger viewers it truly covets, Turner couldn't stick to a standard golf formula featuring soft-focus green shots and hushed commentary. Instead, "Capital One's The Match: Tiger vs. Phil" will include live microphones on Woods, Mickelson and their caddies, as well as drone cameras hovering overhead as they battle for the $9 million prize. "The more Tiger and Phil can take the fan along with them, the more successful it will be," said Barry. "I think everybody expects a visual and audible confrontation now."

Those younger viewers are what AT&T needs as it looks to stake out territory in an entertainment landscape driven by direct-to-consumer subscription streaming services. But will this millennial-friendly approach irk traditionalists? AT&T will find out on Friday, when the two superstars face off at Shadow Creek golf course on the outskirts of Las Vegas. (Airtime will be 3 p.m. in New York. The show will run you $20 and is available through Turner's B/R Live streaming service as well as AT&T's DirecTV and AT&T U-verse. The pay-per-view event will also be distributed to other cable, satellite and telecommunications operators, the company said.)

While planning the broadcast, Barry watched footage from "Monday Night Golf," a series of one-on-one matches between Woods and other top golfers that ran from 1999 to 2005, as well as "Skins Game," televised match play that aired for more than two decades starting in 1983.

While it's important to keep older viewers in their comfort zone, Barry said he wants to make sure the faceoff doesn't look like a retread. The two players said they shared Barry's vision.

"There are no cutaways for commercials, so you are going to hear all of the talk, all of the banter throughout the entire hole, and I think that is going to give an insight to the viewer that they've been wanting," Mickelson said in a joint interview with Woods on Bloomberg Television. "You will hear the funny side of Tiger and the way he likes to give the needle."

Woods concurred. The microphones, he said, will allow the viewer to "be a part of what it's like to actually be out there."

The two golfers, who formed a joint entity to market the event, had a say in every decision. Woods and Mickelson rejected some things, Barry said, though he declined to be specific.

As PGA Tour golfers, Woods and Mickelson had to get the tour to sign off, and they had to pay a fee for the rights. The tour, which has sanctioned the event as a one-day exhibition, did set some parameters. Both Woods and Mickelson, for instance, will be able to make side bets during the event, with the proceeds donated to charity, but the tour asked that such on-air wagers be limited to a handful for each player.

"Wagering is a part of what we do in the game of golf," said Woods.

Viewers will have a chance to get in on the action. Live odds for each hole will be shown on screen, and B/R Live will offer a "Pick 'Em Challenge," allowing fans to predict the winner for each hole, with a $1 million prize if anybody gets every hole right.