It's Good to Be King: LeBron, Cavs Secure Ratings Glory for ABC 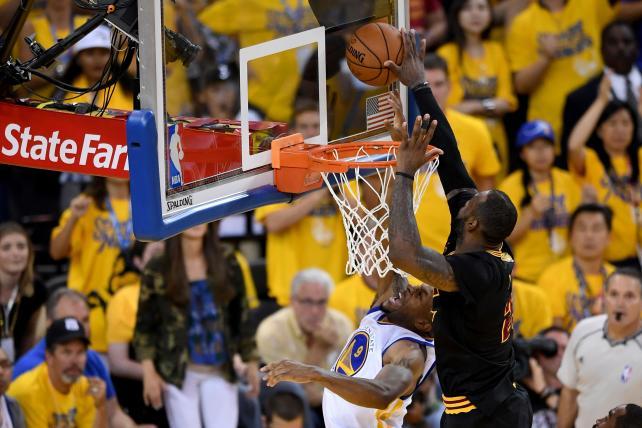 LeBron James of the Cleveland Cavaliers blocks a shot by Andre Iguodala of the Golden State Warriors in Game 7 of the 2016 NBA Finals.
Credit: Thearon W. Henderson/Getty Images

LeBron James and the Cleveland Cavaliers on Sunday night put an end to the Sixth City's 52-year championship drought, and in so doing delivered the NBA's highest Nielsen ratings since the close of the Michael Jordan era.

According to Nielsen live-same-day data, the Cavs' 93-89 victory over the Golden State Warriors averaged 30.8 million total viewers and a 15.7 household rating, making it the highest-rated NBA broadcast since Game 6 of the 1998 Finals. (For the sake of comparison, MJ's "farewell" clincher scared up a staggering 35.9 million viewers and a 22.3 household rating, two records that would appear to be in no real danger of falling anytime soon.)

Game 7 topped ABC's previous single-game high of 28.2 million viewers and a 15.6 household rating, which the network earned with its coverage of Game 7 of the 2010 Celtics-Lakers NBA Finals.

An outlier in a series that had been plagued by blowouts -- the average margin of victory in the first six games was 19.7 points -- the airtight Game 7 peaked in the final 10 minutes of play with an average draw of 44.5 million viewers and a 22.5 household rating.

The deciding game of the 2016 NBA season easily outpaced recent Game 7s in other sports, topping the Oct. 29, 2014 World Series matchup between the Giants and Royals (23.5 million viewers, 13.7 household rating) and the June 15, 2011 Stanley Cup Final showdown between the Bruins and Canucks, which drew a 38-year NHL high 8.54 million viewers and a 4.8 rating. The Cavs' clincher also out-rated all but four of last season's regular-season NFL broadcasts.

While the prospect of a seventh game seemed rather remote after Game 4, when Cleveland had found itself mired in an unforgiving 3-1 hole -- a deficit from which no NBA Finals team had ever rebounded -- LeBron's signature brand of grumpy, astonishing versatility all but ensured that the series would go the distance. In thumbing his nose at the laws of physics (That Game 3 dunk! That chasedown block in Game 7!), King James helped pour some $87 million in bonus ad sales revenue over an already impressive five-game haul.

Media buyers said that the rush to secure time in the final frame began shortly after an exasperated Steph Curry tossed his mouthpiece at a fan at the tail end of Game 6. The average unit cost for a 30-second scatter buy in Game 7 was around $655,000 a pop.

The cash grab began in mid-April, when the NBA postseason tipped off on ABC/ESPN and TNT. According to Kantar Media estimates, the 79 playoff games scared up $570 million in ad sales revenue, of which automakers kicked in approximately 65%.