The news from Cupertino: "Apple's string of new subscription services pushes advertising mostly out of the picture," Ad Age's Garett Sloane writes in his summary of Monday's big announcements from the tech giant, "but for the magazine industry that is a major partner in Apple's expanded news offering, there will be ads nonetheless." Sloane notes that "When Apple executives showed off Apple News Plus, a new subscription magazine service, the focus was on 300 glossy magazines but not the ad experience." But Doug Olson, president of Meredith Magazines, tells Ad Age that "Every ad from the print edition will be in the digital edition. We think this is a great opportunity to bridge traditional magazine experience to the digital future." Sloane also gets thoughts from Troy Young, president of Hearst Magazines. Keep reading here.

The Daily Beast's Matt Wilstein is launching his new podcast with a bang. See Wilstein's own summary of the proceedings in "Sarah Silverman Throws Hulu Under the Bus on 'The Last Laugh' Podcast Premiere." Silverman offers the inside dish on the cancellation of her Hulu show "I Love You, America"—and as Wilstein tells it, the casual conversational podcast format seems to keep her talking when maybe she shouldn't. To wit:

"I know that they did love the show," Silverman starts out, diplomatically, "but I think what it cost compared to its popularity or the eyes that they had on it didn't—you know, the people that make the decisions there don't have any connection to the show. So it's easier for them. It's probably smart. They make very hard decisions."

Then she takes a turn. "I probably shouldn't," she says tentatively. "Eh, fuck it. Guess I'll just burn this one down. I think it's a funny story, or maybe it sounds obnoxious and it's too showbiz-y. I'm really debating right now."

And then she serves up a story about some jaw-droppingly petty cheapness from Hulu. Keep reading here ("The Last Laugh" launches today).

On the newsstand right now: The Economist, with its "The Determinators: Europe takes on the tech giants" cover, which fronts a story inside titled "Why big tech should fear Europe."

One word conspicuously missing from the cover: "American," as in "American tech giants," given that all four of the companies represented by their logos—Apple, Google, Facebook and Amazon—are, of course, U.S.-based.

Speaking of Google... Sara Fischer of Axios serves up an exclusive this morning under the headline "Google partners to fund new local media sites." She writes that,

Google is launching the Local Experiments Project, an effort to fund dozens of new local news websites around the country and eventually around the world. The tech giant says it will have no editorial control over the sites, which will be built by partners it selects with local news expertise.

The company is teaming up with Sacramento-based publishing conglomerate McClatchy on the venture. Keep reading Fischer's story here.

And finally... On Sunday, CNN published a story headlined "After Mueller report findings, Team Trump plans to 'slam and shame the media.'" Cue today's cover (scroll down to see it) of the New York Post—the Rupert Murdoch-controlled tabloid and corporate cousin of Trump-favorite Fox News—which, well, slams and shames the media. Inside, the Post's Sohrab Ahmari explains the paper's decision to whip up March Madness-inspired brackets:

Our contenders are divided into four groups (not unlike NCAA conferences): the print journalists, the cable TV talkers, the Twitterati and the network news reporters and "analysts." And the brackets are seeded, with the most visible and influential figures contending against the lesser-known.

In the Print category, the top seed is the never-Trump honcho Bill Kristol, who in August predicted that "Mueller will find there was collusion between Trump associates and Putin operatives; that Trump knew about it; and that Trump sought to cover it up and obstruct its investigation." Or not.

Kristol was founder of The Weekly Standard, the conservative political weekly that folded last December. (Fun fact: It was originally bankrolled by, yes, Murdoch-controlled News Corp., which later sold it to MediaDC, a subsidiary of Clarity Media Group, the same company that owns the conservative Washington Examiner.)

Keep reading to find out who the Post's top seeds are in the other media brackets. 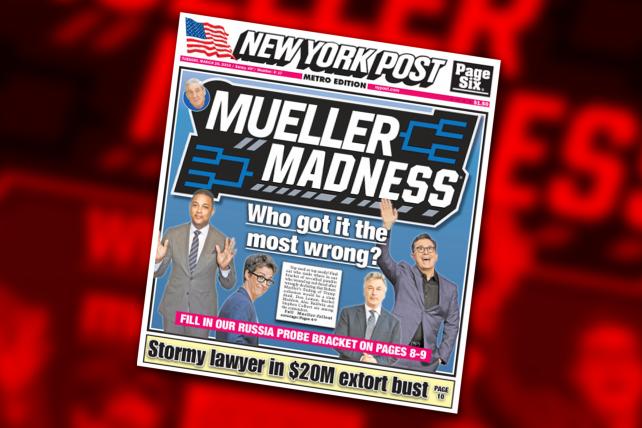