People Will Pay $1-$3 Per Month, With a Cut to Participating Sites Like Mashable
READ THIS NEXT
Watch: How brands should approach responsible media investing—with OZY Media’s Carlos Watson

Google, the biggest seller of online ads, has created a way for publishers to make money without ads.

Google on Thursday introduced an invitation-only crowdfunding program called Contributor that lets people pay $1 to $3 each month to visit sites devoid of ads. The Onion, Mashable, WikiHow, Urban Dictionary, ScienceDaily and photo-sharing site Imgur are among the first publishers that have signed on to not serve ads to Contributor subscribers.

Google's Contributor is effectively an ad blocker, but one that benefits publishers as well as users. Like a traditional ad blocker, albeit one in which publishers give their cosent, Contributor blocks the ads on a participating publisher's page so that visitors can focus on the content they came for. The space the banners would otherwise occupy will still be there, but the actual ads will be replaced with a "Thank you" message. 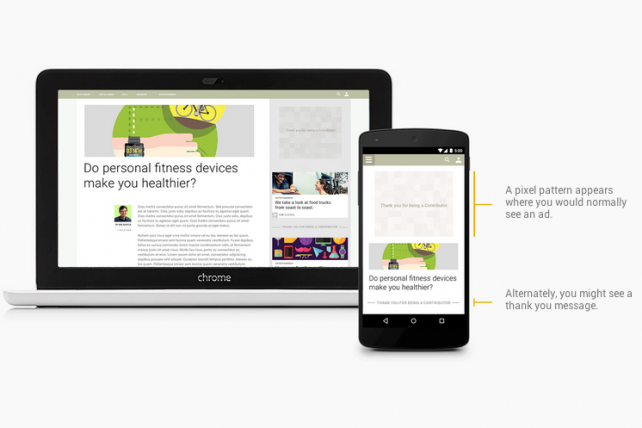 Instead of ads, Contributor subscribers will be shown 'thank you' messages.

Google will split with the participating sites some of the money subscribers pay for Contributor, according to a company site announcing the program.

The first 10 publishers to participate in Contributor are all part of Google's ad network, but it remains to be determined how Google may open up to off-network publishers and ads sold by other companies. A spokeswoman described Contributor at this stage as "very much an experiment."

Contributor works on current versions of major browsers as well as mobile apps, according to the spokeswoman. Advertisers won't be charged for the ads that it blocks.

It may seem odd for a company like Google, which made 89% of its $16.5 billion in third-quarter revenue from advertising, to enable publishers to build their businesses without advertising. But it isn't, really.

For starters, Google's business of selling ads on other publishers' sites isn't as strong as it was a couple years ago. And the company has spent the past few years building up its non-advertising media business as a increasingly important source of revenue. Google's "other" revenue category includes sales of mobile apps, TV shows and movies and grew by 50% year-over-year in Q3 to $1.8 billion. And more recently Google's YouTube has expressed an interest in opening up an ad-free, subscription-based revenue stream. Last month YouTube boss Susan Wojcicki said the online video service was considering introducing a paid tier, and last week YouTube announced an ad-free, subscription-based music streaming service.