GQ.com is getting a new look this year, and that includes making sure the site's ads are ones people will look at.

Ahead of a larger redesign that will debut in the fall, GQ is rolling out some tweaks to its site, including a revamped home page, new slideshow format, a new grooming section and in-stream ads designed to own people's attentions. Mr Porter, Mont Blanc, Tiffany & Co. and LG are among the first brands to use GQ's new ad formats.

These tweaks are among the more apparent examples of a bigger overhaul GQ has made to its back-end publishing technology. "This migration is the biggest thing to happen at GQ since Conde Nast bought the brand," said the magazine's publisher Howard Mittman.

That overhaul has reduced the average time it takes to load a GQ.com page from six seconds to less than two seconds, said GQ's executive digital director Mike Hofman. That tweak alone may have helped GQ's traffic over the Fourth of July weekend, which capped the site's biggest traffic week of the year, Mr. Hofman said.

In May 2015, 3.76 million people in the U.S. visited GQ's desktop and mobile sites, a 37% increase from a year ago, according to comScore. GQ claims that 53% of its monthly traffic is on mobile, and mobile is where the page-load speeds would likely be most apparent. 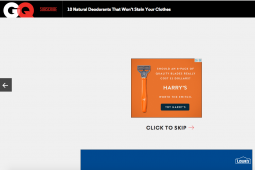 But the back-end work has also included enabling editors and writers to embed GQ-produced videos within articles and highlighting the publication's professional photography within the new slideshow formats.

GQ.com's new slideshow format shouldn't appear all that different from the slideshows found on other publishers' sites, aside from maybe the ads. When viewed on desktop computers and tablets, the slideshows feature a banner ad below the slideshow as well as one beside it. These ads remain in place as people swipe through a slideshow. GQ is also weaving ads into the actual slideshows, so that between swiping from one slide to the next, a display ad will appear that people need to click on in order to move to the next slide.

"The slideshows offer us about as close as you can get to 100% viewability as possible," said Mr. Mittman.

Viewability has become a big trend among online publishers who are being pressured to prove to advertisers that their money isn't going to waste on ads no one can see. In a recent interview, CBS Interactive's chief revenue officer and the Interactive Advertising Bureau's chairman David Morris said that viewability is the biggest issue currently facing publishers. In December 2014, Google claimed that 56% of the web's banner ads never had a chance to be seen, and in May the tech giant said that 46% of the web's video ads never had a chance to be viewed.

While these interstitial slideshow ads may be a good sell to viewability-minded advertisers looking to make sure their ads have a chance to be seen, they may not go over so well with GQ's audience. According to a survey of 1,750 people conducted in April 2015 by market research firm C4, 78% of respondents said they find these types of interstitial slideshow ads somewhat annoying or completely frustrating, and 54% said these ads diminish the respondents' perception of the brand.

However Mr. Mittman said early numbers suggest GQ's slideshow ads don't inspire such ire among its visitors. "What we've found in terms of viewability and user engagement as well as click-through rates -- albeit that's a declining metric of importance -- is bigger is better," he said.

GQ is also looking to boost performance for its video advertisers. In addition to now being able to include GQ-produced videos on article pages, those article pages can also feature standalone video ads that will appear within an article's body and that people will need to click to play. Mr. Mittman said video-ad-completion rates have increased by 15% so far with the introduction of these in-stream video ads, though he didn't provide hard numbers on what the completion rates were or are now.