Your Guide to the Leading Media Companies 2012

U.S. media revenue for the 100 Leading Media Companies rose 4.0% in 2011, fueled by surging growth in digital. That represents a record $340 billion in net U.S. media revenue. However, last year's percentage gain marked the lowest growth rate in a nonrecession year since Ad Age began this ranking in 1981. Digital revenue -- mostly at digital pure plays such as Google and Facebook -- jumped 19.7%. Remove digital from the equation, and Media 100 revenue rose only 2.8% in 2011.

The digital divide continues in 2012. U.S. revenue for the 100 largest media firms increased 4.3% in the first half of 2012, according to Ad Age DataCenter estimates. Digital pure plays climbed nearly 20%, driving year-to-date growth. Take them out of the mix, and Media 100 revenue edged up just 2.1% in the first half. 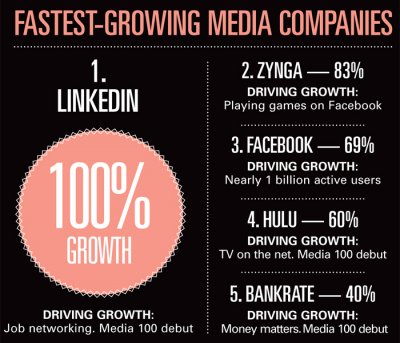 YP Holdings was formed in May 2012 when AT&T sold a majority stake in its yellow-pages business.

Berkshire and Halifax Media are rolling up newspapers. Halifax Media started in 2010 with one Florida paper and then this year bought regional papers from The New York Times Co. and Freedom Communications.

Berkshire, the diversified holding company, made the list after Chairman-CEO Warren Buffett increased his daily newspaper holdings to 29 from one. Mr. Buffett snapped up his hometown Omaha World-Herald Co. and papers in the Southeast and Texas, betting on the viability of smaller-market newspapers and opportunities to grow digital.

"I read five newspapers daily," Mr. Buffett told his publishers and editors. "Call me an addict."

Berkshire is hardly overdosing on newspapers. The single daily it owned for the full year -- The Buffalo News, bought in 1977 -- accounted for 0.07% of Berkshire's 2011 worldwide revenue, according to Ad Age DataCenter estimates. If Berkshire had owned its current roster of papers in all of 2011, newspapers would have accounted for an estimated 0.34% of worldwide revenue.