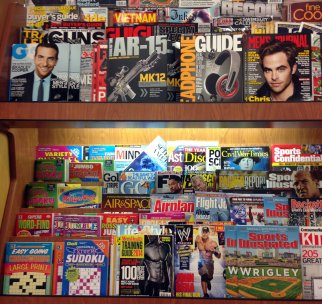 Book of AR-15, a special interest publication from InterMedia Outdoors, is displayed prominently at a Chicago newsstand in December.

A possible exception to this rule is gun publications, where it's not unheard of, according to The New York Times, for advertisers to exert outsized influence on some of these magazines.

"When writers stray from the party line promoting an absolutist view of an unfettered right to bear arms, their publications -- often under pressure from advertisers -- excommunicate them," Times reporter Ravi Somaiya wrote in a story published Sunday.

Dick Metcalf, former contributing editor at InterMedia Outdoor's Guns & Ammo magazine, claims to be one of the excommunicated. The Times interviewed Mr. Metcalf, who said that Guns & Ammo, under pressure from two major gun manufacturers, dismissed him after he wrote an op-ed calling for some gun control.

As gun magazines reportedly bend over backwards for their advertisers, the consumer demand for them grows, with four of the five titles in InterMedia Outdoor's shooting group recording increases in paid and verified circulation through the first half of 2013, the most recent reporting period available from the Alliance for Audited Media, which tracks magazine and newspaper circulation.

The increases come as gun and ammunition sales are on the rise, with revenues expected to grow 20.2% in 2013 to $14.7 billion, according to an IBISWorld report. This growth is at least partly fueled by the tightening of gun laws, the report said, a phenomenon that has likely helped stoke consumer and advertiser interest for the magazines catering to gun enthusiasts.

"Traditionally, these magazines do better when gun owners feel their rights are being threatened," said Steve Cohn, editor-in-chief of Media Industry Newsletter.

Whether or not that's the case, InterMedia Outdoor's Shooting Group -- which includes titles Guns & Ammo, Handguns and Shotgun News -- saw readership climb. Handguns, for instance, recorded a 16% boost in circulation through June 30, 2013, according to AAM. Newsstand sales rose 34%.

At Guns & Ammo, circulation climbed 7%. Newsstand declined slightly -- 4% -- though it beat the industry's average drop in single-copy sales of 10% during that time.

Total circulation fell 1% across the magazine industry at large, according to AAM.

Other gun titles also saw circulation increases. For instance, American Rifleman, a magazine of the National Rifle Association, boosted its circulation 14%, according to AAM. America's 1st Freedom, another NRA title, recorded an 8% boost in circulation.

It's hard to say whether advertising in these titles has kept pace because the Publishers Information Bureau, which tracks magazines' print ad pages, does not monitor most gun publications. Media Industry Newsletter, another scorekeeper in the ad-pages game, monitors Guns & Ammo but not its sibling publications in InterMedia Outdoor's shooting group.

At Guns & Ammo, print ad pages increased nearly 3% in 2013, according to MIN, compared with the industry's 0.44% decline overall. The strong year for Guns & Ammo caps five years of growth in ad pages for the magazine. In 2012 alone, ad pages climbed a whopping 20%, MIN reported.

InterMedia Outdoors did not respond to Ad Age's requests for comment, though an editor at the magazine told the Times that "advertisers obviously always have power, and you always feel some pressure." He also said Guns & Ammo's editorial independence was "not at risk."

Mr. Metcalf's op-ed, which appeared in the December issue of Guns & Ammo, baffled and enraged readers, who took to the magazine's Facebook page to express their anger. In the op-ed, Mr. Metcalf argued that gun regulation does not equate to an infringement of the Second Amendment. "I don't think that requiring 16 hours of training to qualify for a concealed carry license is infringement in and of itself," he wrote.

Days after the op-ed was published, Mr. Metcalf was shown the door and the magazine's top editor, Jim Bequette, said he would retire early, handing the reins to Eric R. Poole, who oversaw InterMedia Outdoor's special interest publications, including Book of the AR-15.