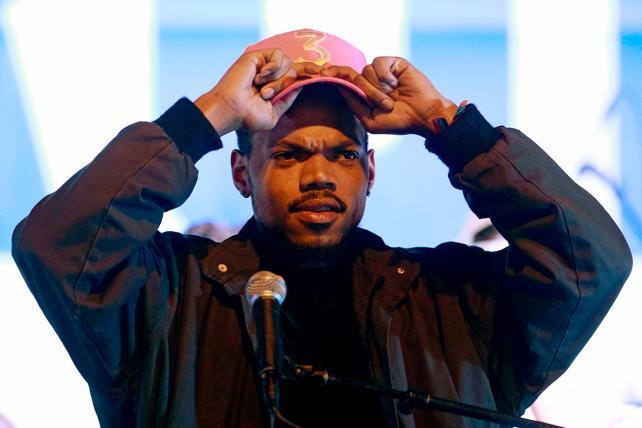 Chance the Rapper addresses the crowd at the 'End of School Year Peace March and Rally' in Chicago on June 15, 2018.
Credit: Jim Young/AFP/Getty Images

Chicago native Chancelor Jonathan Bennett, aka Chance The Rapper, has purchased Chicagoist, the shuttered local news and culture site. He announced the acquisition in a new song, "I Might Need Security," with the line, "I bought the Chicagoist just to run you racist bitches outta business." He released an audio track of the song on YouTube (embedded below) around midnight. (Note: The song kicks off with "Fuck you, fuh-uh-uh-uh fuck you," so if you're listening at work you might want to use headphones.)

Chicagoist's sibling Gothamist references the song and confirms the purchase in a post published at 12:01 a.m. ET:

It's true. The deal took place between WNYC and Chance the Rapper's Social Media LLC. Chicagoist, the second "-ist" site (which launched in 2004), was acquired this year by WNYC.

"I'm extremely excited to be continuing the work of the Chicagoist, an integral local platform for Chicago news, events and entertainment," said Chance The Rapper. ... "I look forward to re-launching it and bringing the people of Chicago an independent media outlet focused on amplifying diverse voices and content."

Chicagoist was part of the Gothamist group of local websites that owner Joe Ricketts shut down in November 2017 after newsroom employees voted to unionize. A group of public radio stations led by WNYC purchased the assets of the company in February, resulting in the revival of flagship Gothamist as well as LAist and DCist; old Chicagoist content has remained online with a homepage notice: "The Chicagoist archives brought to you by WNYC."

Chance The Rapper's song includes references to other Chicago media, including the Chicago Sun-Times and Crain's Chicago Business (the latter is a corporate sibling of Ad Age):

And I can't do nothing right, they gon' always be at me
I missed a Crain's interview, they tried leaking my addy
I donate to the schools next, they call me a deadbeat daddy
The Sun-Times get in that Rauner business
I got a hit list so long I don't know how to finish

Bruce Rauner is the governor of Illinois. The "addy" bit may be a reference to Crain's Chicago Business real estate coverage from earlier this year. CCB routinely covers notable real estate transactions, and in April the publication reported that Chance The Rapper spent $3.7 million to purchase a 4,500-square-foot condo in Chicago's Streeterville neighborhood. CCB didn't specifically print the street "addy" of the building, but mentioned that starchitect Helmut Jahn was the designer of the high-profile building. (Other media, including Curbed and Chicago's CBS affiliate CBS 2, also covered the purchase.)