New York-Based Edit Staffers Won't Move, but Some Will Get New Jobs at Company
READ THIS NEXT
Pinterest hosts its first ad summit and opens new video ad space to brands

Hearst Magazine is moving Country Living's editorial operations to Birmingham, Ala., from its current location in New York, the company said Monday. Current edit staffers, who learned of the news Monday afternoon, will not make the move. 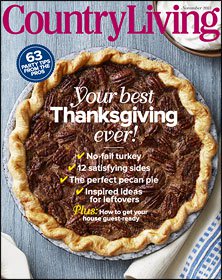 Country Living's editorial operations are moving to Birmingham, Ala.

A number of the magazine's New York-based staff will be absorbed by other Hearst publications, but it's too soon to say how many, according to Hearst Magazines President David Carey. The number will be determined over the next six months, as the company assesses each employee and its needs. Others will leave the company.

The cost of running a magazine out of Birmingham is cheaper than in New York, but Mr. Carey said cost-cutting did not motivate the decision. "This is really driven by the belief that the brand and in its current form will be more successful if the business is not in New York," he said. "You have to believe that when you're close to your audience -- when you're immersed in the Country Living lifestyle -- you put that into your pages. It's a new era for the magazine."

He also said Birmingham will serve as a better jumping off point for its brand extensions, including live events like Country Living Fairs.

Country Living, which has a total paid and verified circulation of more than 1.6 million, saw its print and digital single-copy sales fall 12% through the first half of 2013 compared with the same time last year, according to the Alliance for Audited Media. Print ad pages are off 12% through October, compared with the equivalent period a year earlier, according to the Media Information Newsletter.

Ms. Hardage Barrett is already based in Birmingham, where Southern Living is headquartered.

Hearst had been discussing the move for several months, according to Mr. Carey. They explored a variety of other locations, including Austin, Texas. "We wanted to be in the South," he said. "And there's a rich tradition of magazines in Birmingham."

Several titles that Time Inc. acquired in 1985 when it bought Southern Progress Corp. are based in Birmingham, including Southern Living, Cooking Light and Coastal Living. Some staff members of Dennis Publishing's Mental_Floss are also there.