The Event: Hearst Corp.'s "Grand Opening of Hearst Tower"
The Date: Oct. 9
The Venue: The opulent and eco-friendly new Hearst Tower at West 57th Street
The Bar: Open and often
The Entertainment: A long set by Stevie Wonder after a short performance by Cirque du Soleil
The Crowd: Publishing bigwigs, TV personalities, CEOs, actors, politicians, your basic movers and shakers -- except of course for the Freeloader

Instead of trying to set the scene by describing the new Hearst Tower's sculpted entryway waterfall (fed by rainwater), its soaring cafe level or the views from its 44th floor, let's scan the boldface names wandering the venue to get a picture of this party. 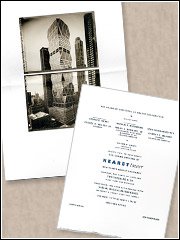 There were the reporters: The New York Post's Richard Johnson of "Page Six" and Keith Kelly, and David Carr and Katherine Q. Seelye from the New York Times.

And the Hearst crowd, itself worth watching, included Chairman George R. Hearst Jr.; President-CEO Victor F. Ganzi; Cathleen P. Black, president, Hearst Magazines; Michael A. Clinton, the magazine unit's exec VP, CMO and publishing director; David Granger, editor in chief of Esquire; Kate White, editor in chief of Cosmopolitan; former Cosmo editor Helen Gurley Brown; Susan Schultz, editor in chief of CosmoGirl; and Oprah Winfrey and Gayle King, who arrived early to check out Oprah's office and then had to be sent back outside to walk the Hearst-blue carpet and photo line.

Although gliteratti and titans of media comprised the real main dish last night, Freeloader has to say we were very well fed with actual food, too. Serving stations offered high-end pastas, pizzas and shellfish, while hors d'oeuvres worth chasing after included steak tartare, curried chicken and cheese puffs, handed out by white-jacketed servers (one of whom was a spitting image of Anne Hathaway's always-smiling turn in "The Devil Wears Prada.") We'd elaborate further, but we're no gourmands -- as evidenced by our misadventures at a Gourmet dinner last week.

Eventually Freeloader needed a smoke break just to avoid the crowd's intense game of eye-checking. Outside on Eighth Avenue, uninvited onlookers leaned on police barriers, asking what the party was about and who was inside. One was said to flash her breasts to a police officer in an unsuccessful bid to get in. "New York!" another yelled, apparently just pleased with the spectacle.

Back inside, architect Lord Norman Foster joined the politicians and Hearst executives in a speech from a narrow stage overlooking the waterfall (properly called "Icefall," dontcha know). Mr. Schumer nonplussed the Freeloader when he admitted to getting skyline envy when he visits Chicago or London, but all was forgotten as soon as Cirque du Soleil started jumping around and rising on cables hundreds of feet in the air.

Cirque du Soleil, in turn, was forgotten as soon as Stevie Wonder started playing. After which, the Freeloader checked out. We do have a day job after all.