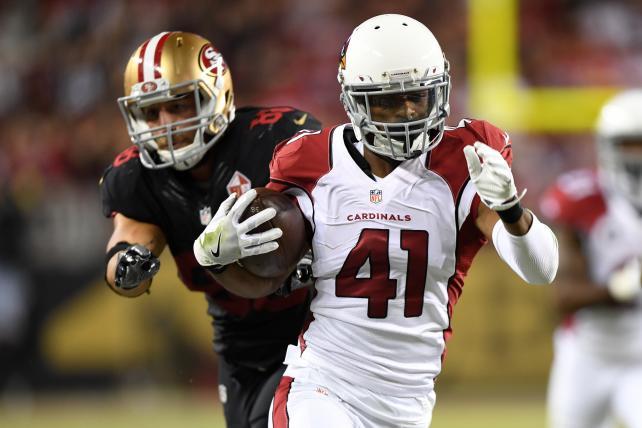 Marcus Cooper of the Arizona Cardinals runs after intercepting a pass by Blaine Gabbert of the San Francisco 49ers during their game at Levi's Stadium on Thursday in Santa Clara, Calif.
Credit: Thearon W. Henderson/Getty Images

With the first quarter of the 2016 NFL regular season on the books, media executives and Monday morning quarterbacks of all stripes are engaged in a whodunnit of sorts, as the enigma that is the league's shrinking TV ratings has become something of a locked-room murder mystery. There are plenty of clues to sift through, and any number of conclusions to be arrived at, but while football fans and data sleuths alike puzzle over the evidence, the well-heeled gent with the knife in his back is bleeding out all over the area rug.

Actually, he'll be fine. It's probably just a flesh wound -- although you wouldn't know it from all the teeth-gnashing, garment-rending analysis that has been published in light of the NFL's recent ratings setbacks.

Before we get into the whys and wherefores of the great pigskin perplexity, let's introduce a little dose of perspective to the proceedings. For starters, while ratings for the three primetime NFL packages are down quite a bit compared to the year-ago period, the Sunday afternoon regional and national windows are holding up rather nicely. And perhaps more to the point, with 192 regular season games remaining on the 256-game schedule, network execs and media buyers alike agree that there is still plenty of time for the ratings picture to improve. In other words, no one with skin in the game is panicking ... at least not yet.

If the nighttime broadcasts aren't putting up the splashy numbers of a year ago, the Sunday afternoon windows are generating ratings that are more consistent with previous seasons. In aggregate, the 1 p.m. and 4:20 p.m. games on CBS and Fox are averaging 18.2 million viewers, down just 4% versus the first four weeks of last season.

When the afternoon games are broken down by their individual packages, the four regional single-headers averaged 17.7 million overall viewers, flat compared to the year-ago slate, while the early halves of the double-headers slipped 6% to 13.6 million viewers. Meanwhile, the 4:20 p.m. national games continued to draw a huge crowd, dipping 5% to 23.4 million viewers and a 13.4 household rating.

Modest decline aside, that's still a massive turnout, comparable to the 24.5 million viewers/13.9 rating NBC averaged over its 17 nights of Summer Olympics coverage and well beyond the reach of the 20.3 million viewers/11.4 rating ABC delivered during the 2016 NBA Finals.

Bundle the ratings for each of the 26 NFL windows in which games have aired thus far, and overall average deliveries are down 11% year-over-year to 16.7 million viewers. While none of this is exactly what any NFL rights holder or advertiser would characterize as welcome news, it's also not a wholly inexplicable turn of events. Nor has it inspired the league's network partners or media buyers -- especially those who spread their clients' investments across the NFL portfolio rather than limiting their buys to the primetime packages -- to start scrambling for the Klonopin.

"It's too early to get all worked up about [the ratings]," said a national TV buyer whose client roster includes a number of NFL blue-chippers. "It's like you're Carolina. Last year you're in the Super Bowl, this year you start, what, 1-and-3? Are you out of it after just four games? No. There's an awful lot of football left to be played."

Marketers' questions
While that particular buyer's equanimity is a function of a diverse pigskin portfolio ("I don't need to be in all the primetime windows; my clients like Sunday afternoons, college…"), another NFL buyer allowed that some advertisers are starting to get antsy about the ratings declines. "I'm not too worried about it, but the ratings stuff has been sort of inescapable," the TV buyer said. "Some of the clients have expressed concern over the drops, but I don't think we're going to see any sort of divestments going forward."

When asked if the networks had begun offering ADUs (industry argot for "audience deficiency units") in order to make up for the string of NFL under-deliveries, one buyer said that that conversation has only just begun. "I'm not as exposed, because my windows aren't as down as if I heavied up on the night games," the buyer said. "But when it happens, it happens."

The same buyer acknowledged that while the cost of buying time in NFL games is steep, the network partners are no less amenable to freeing up makegoods in their top-shelf inventory as they are for any other programming. "They always hold back enough inventory for ADUs," the buyer said. "To my recollection, there's never been an issue with [clients] not being made whole."

Like Joe Montana casually pointing to the famous comic actor in the stands at Joe Robbie Stadium while engineering the fabled Drive ("Hey, isn't that John Candy?"), buyers remain almost preternaturally cool and composed in the face of the NFL ratings issue. For some, the declines are credibly explained away by a less-than-enthralling on-field product. The primetime games in particular have featured uninspired, unbalanced matchups, which have led to a string of the sort of blowouts that are only of interest to daily fantasy sports enthusiasts and degenerate gamblers.

Games that aren't outright massacres are often endurance tests, joyless three-and-a-half-hour slogs punctuated by the league's stupefying schedule of rules infractions and penalty calls that are themselves protracted by endless reviews and revisions. Season-to-date, the zebras have tossed 1,053 flags, which marks an 11% increase versus the year-ago 952, and as ESPN's Scott Van Pelt points out, bluenose taunting infractions, which police "excessive celebration" and other expressions of glee, are up 220%.

Ask 10 people about what's behind the ratings recession and you'll get 10 different answers. TV's No. 1 draw is being tossed around in a sort of perfect storm of causality, and everything from the election cycle to a dearth of star power to the national anthem protests is believed to be to blame. The latter is a particularly suspect catalyst, given that the claims made on behalf of the so-called Kaepernick Effect are based on small-sample telephone surveys and hash tag counts. Just as there is no observable correlation between Twitter activity and linear TV ratings -- MTV's VMAs are a prime example of the dangers of conflating heavy social traffic big Nielsen numbers -- there is no quantifiable evidence that the #BoycottNFL movement has been a key contributor to the audience erosion.

For its part, the NFL denies that the anthem protests have played a part in its recent ratings declines, suggesting instead that the wild and wooly presidential election cycle is the primary culprit. That theory appears to be ratified by September's cable news ratings, which in aggregate are up 20% compared to the year-ago period. Fox News Channel is particularly hot heading into the election, averaging 2.31 million primetime viewers last month, up 32% versus September 2015.

Of course, politics demonstrably took a chunk out of at least one "Monday Night Football" telecast, which in turn has skewed ESPN's seasonal NFL deliveries. Given the unenviable task of going head-to-head with the record-mashing Sept. 26 presidential debate, ESPN's coverage of the Falcons-Saints game drew an all-time low 8.05 million viewers and a 4.9 household rating. NBC faces a similar obstacle on Sunday night, when its presentation of the Giants-Packers showdown squares off against the second Trump-Clinton clash. That said, NBC isn't expected to take nearly the hit ESPN suffered a few weeks ago, as the turnout for the second POTUS debate isn't likely to match the first. Moreover, its "Sunday Night Football" broadcast is a much more compelling matchup than the earlier NFC South skirmish, as it features last season's top-rated NFL franchise (Green Bay) and one of the two teams that represent the nation's largest DMA, the New York Giants.

NBC's failsafe
Speaking of NBC, the network has a clear advantage over the rest of the NFL's TV partners inasmuch as it has the luxury of invoking the "flex" schedule. Beginning this week, NBC can request to swap out its scheduled primetime game for one of CBS or Fox's afternoon games, thereby ensuring (in theory, anyway) that the league's high-profile Sunday night showcase isn't burdened by a dud matchup. Of course, this arrangement does not give NBC carte blanche to simply cherry-pick the best afternoon game from the Sunday afternoon broadcasters; per NFL rules, both CBS and Fox reserve the right to protect one game in each of the flex weeks.

If lousy games and politics don't pass your own personal smell test, there are a dozen more theories waiting in the wings. Perhaps the ratings slide is simply a matter of oversaturation, of the NFL pumping out more weekly content than even the most gluttonous football fan can possibly digest. Or maybe point a finger at cord-cutting or millennial drift or Deflategate or the goofy, bathrobe-sporting ubiquity that is full-time Papa John's/Nationwide/DirecTV spokesman Peyton Manning. Or perhaps fans have tuned out because they're no longer willing to overlook the ugly side of the NFL, the ongoing concussion epidemic, the string of domestic-violence offenses, in exchange for a few hours of weekend entertainment.

Whatever the root cause, buyers say they're confident that NFL deliveries will bounce back as the season progresses. And if not? "Then it gets even more expensive!" laughed one buyer, in a nod to TV's time-honored adherence to the law of supply and demand. "This isn't the end of the world. It's been four weeks. Give it time."