HGTV Will Never Upset You: How the Network Beat CNN in 2016 | Ad Age
Skip to main content

HGTV Will Never Upset You: How the Network Beat CNN in 2016 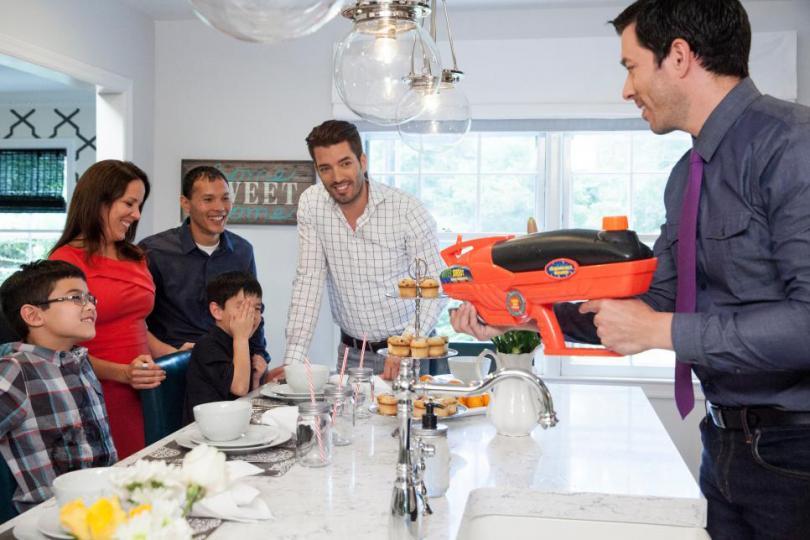 Nikki Justice doesn't seem like she'd be a big fan of HGTV's show "Property Brothers." A first-year astronomy and physics major at Ohio State University, she's never owned a home, let alone flipped one. But her parents watched regularly, and now Ms. Justice tunes in several hours a week to watch one home transformation after another.

"A lot of the news these days is really stressful," she said. "HGTV is not something that's going to hurt me. I watch it and dream of what I want for my future house."

So does Washington Redskins quarterback Kirk Cousins, who recently said that he prefers HGTV to ESPN. Taylor Swift shared on Instagram her affection for HGTV's "Fixer Upper." And Hillary Clinton said she likes "Love It or List It" and "Beachfront Bargain Hunt," calling them "relaxing, entertaining and informative."

HGTV's formula is relentlessly consistent: a shabby house gets a makeover, and a happy couple moves in. A variation on the theme -- house-flipping for fun and profit -- works too. The network has aired 23 different flipping shows over the past few years. Today "Flip or Flop" and "Masters of Flip" run in prime time.

In the cable industry, though, success is relative. Like other networks, HGTV has lost nearly 4 million subscribers in the past two years, though ESPN lost about 6 million in that time. In a note last month titled "As Good As It Gets?" Michael Nathanson, an analyst at MoffettNathanson, predicted viewership at HGTV has peaked and advised clients to sell Scripps shares. "I just worry that ratings at cable networks are volatile," he said in an interview.

Since the mid-1990s, HGTV has made its home in a low-slung building about 15 minutes outside of downtown Knoxville, Tenn. Like HGTV itself, the offices feature some homespun touches. The walls of Scripps Chief Executive Officer Ken Lowe's office feature framed press clippings from the local newspaper, the Knoxville News Sentinel. Nearby, a 96-square-foot tiny house -- a feature of several HGTV shows -- has been decorated to look like a gingerbread house.

The last year has been vindicating for Mr. Lowe. When he started HGTV in 1994, few people thought anyone would watch his network "about grass growing and paint drying," he says. For a while, Time Warner Cable wouldn't even carry the channel in New York City, because, he was told, the metropolitan audience wasn't interested.

Mr. Lowe shrugged it off. Walking the aisles of Home Depot and Lowe's stores around the country, he had identified an audience that was passionate about their houses.

"If you watch a lot of our competitors, it's about bling-y expensive real estate in New York or crazy flipping in L.A.," said Scripps Chief Programming Officer Kathleen Finch. "For the most part, our viewers live in suburban houses with yards. We embrace the real America."

So do advertisers. The average HGTV viewer is a college-educated, suburban woman with household income of $83,600 a year and an interest in home improvement -- catnip to advertisers like Home Depot and Lowe's. Wayfair, an e-commerce company that sells housewares, is one of the channel's biggest advertisers, with product integration, commercial time and on-air graphics that urge viewers to "shop this look" on the company's website.

HGTV's ad rates are about twice what some other cable networks command, said Nancy Go, Wayfair's VP-brand marketing. But she says it's worth it: Wayfair's web traffic doubles when it airs commercials on the network.

Even New Yorkers have come around. While much of HGTV's audience is in the Southeast, apartment-dwelling New Yorkers still watch in numbers equal to the network's national average.

Ms. Finch is the gatekeeper of HGTV's aesthetic. A former CBS News producer, she sees her job as a form of journalism, aiming to entertain and inform viewers. After 17 years with Scripps, she preaches the value of consistency. "We super-serve our viewer what she likes," Ms. Finch said, "and we give her more and more of it."

Among the most popular shows, she aims for a new episode every week and stretches the network's franchises and talent. Two of HGTV's biggest stars are Drew and Jonathan Scott, handsome twins from Vancouver who buy and renovate fixer-uppers, and the network makes sure they're rarely idle. While one Scott might be filming part of "Property Brothers," the other might be elsewhere to shoot part of another show, "Buying and Selling."

The network hasn't really experimented in a decade. An astrology-themed decorating show called "What's Your Sign? Design" only lasted from 2006 to 2008, and executives realized they needed to focus on what viewers already liked: houses.

The success of HGTV is linked to the housing market, and the recovery, now in its fifth year, has moderated. Rising mortgage rates may make it harder for people to buy new homes. Disappointing third-quarter results from Lowe's have stoked fears that Americans are cutting back on home spending, and analysts have warned that homeowners may see the cost of construction rise if immigration policies tighten under a Trump administration.

Scripps' pricing power within the industry is also under new pressure. Two major mergers -- AT&T-DirecTV and Charter-Time Warner Cable -- have shifted the balance of power in favor of pay-TV distributors, making it harder for Scripps to negotiate higher rates for its channels. The company charges just 23 cents per subscriber for HGTV, 3% of the estimated $7.21 charged by ESPN.

On the other hand, Scripps executives say their small portfolio is a strength. The company's three main networks, HGTV, Food Network and Travel Channel, are included in all of the new "skinny bundles," low-cost online services like Sling TV and DirecTV Now that offer just a few channels.

Meanwhile, HGTV is expanding internationally, with new versions in Singapore, New Zealand, Canada, the Middle East, North Africa and, coming in January, Poland. The network is also aiming for millennials, producing short-form videos for Snapchat and Facebook. As twentysomethings start buying their first homes, the network's reach among young people is growing.

The key, Scripps executives agree, is a refusal to upset HGTV's audience. There's no profanity, and on-air conflicts are confined to disagreements about paint colors or tile choices. Instead of making the network feel trivial, its fans say, the relentlessly pleasant programming is a comfort, especially in hard times.

That's surprised even Mr. Lowe. He pulled the channel off the air after the Sept. 11 attacks because he felt it wasn't appropriate to show lighthearted fare after so many people died. He replaced the signal a few days later after fans e-mailed and wrote to say they wanted to watch -- they needed something to help them forget.