There's a time and a place for advertising, but that may not be during TV shows and movies. That's the motto of HitBliss, a startup that launched on Friday, allowing users to earn money to stream video content by engaging with advertising.

Created by entrepreneurs Sharon Peyer and Andrew Prihodko, HitBliss rolled out a desktop app and plans to expand to other devices in the coming months.

Here's the premise: Users opt in to receive targeted ads that live in a queue and can be watched at their convenience. Each ad watched results in money earned that can then be used to buy or rent content.

"People don't want to interact with advertising at the same time as when they want to consume content," Ms. Peyer said. "But they will engage with advertising in other settings -- waiting in line at a store, commuting, during a break at work."

At launch, HitBliss will offer TV shows and movies from NBCUniversal, Starz and Paramount. New episodes of TV shows will be made available to buy as soon as a day after it airs, while movies will be available for 24-hour rentals the same day they are available on DVD. Movie rentals range from $1.99 to $3.99, while TV shows are $1.99 to buy.

It takes about two minutes for users who chose to divulge detailed information, such as web browsing history and prior purchases, to earn $1.99. For those who do not wish to include this information in their profile, it could take about five minutes to earn the same amount.

"There is incentive for the user to include more information about themselves, which is better for the advertisers who can then reach the audience they want to reach," Ms. Peyer said. 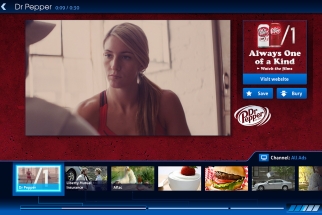 Advertisers, which at launch will include Liberty Mutual, Dr Pepper and Aflac, can define specific criteria to target consumers. For example. Aflac can say they want to reach users who have visited AllState's web site in the past 30 days, Ms. Peyer explained. The app will serve Aflac's ad to these users; consumer information is not made available to the advertiser. The more criteria a user matches, the more they will earn.

But HitBliss Earn isn't a completely new concept. Second-screen TV app Viggle, which allows users to check in to TV shows to earn points to trade in for items like gift cards, also includes a feature that awards additional points for watching ads and movie trailers.

HitBliss, which is privately backed by Alpond Capital, has gone to great lengths to ensure consumers are actually paying attention to brands' messaging: if users mute advertising, lower the volume below audible level or click to another screen, the video will stop playing and they will not earn money. They also may be asked to respond to a question or acknowledge they are watching in order to earn the full amount possible.

Eventually, aside from video, brands will also be able to use polls, interactive games, quizzes and other features.

While HitBliss does not send user information to advertisers, it does deliver other data to allow brands learn how to better advertise to its target audience. HitBliss will provide information on the size of the audience that matches the advertiser's criteria, and of those who match, their reaction to the messaging (whether they watched the full ad, part of the ad, skipped it completely or tried to cheat).

"This allows advertisers to see how well their messaging performs against their target audience," Ms. Peyer said.

How a consumer responds is saved in his or her profile, and advertisers can retarget based upon responses to their first ad. For example, advertisers will eventually be able to send anyone who skipped their first ad a poll question asking them why and get real-time feedback on why the campaign isn't performing well with a certain audience, Ms. Peyer said. Brands can also upload more than one creative to see which performs better with their target audience.

Advertisers pay based on performance. There's a set amount for users who match all the criteria and watch the full ad. For anyone else that engages with its messaging, advertisers pays a fraction of that price.

"Advertisers waste a lot less money with this model," Ms. Peyer said. "Just because me and my husband like the same TV show or movie doesn't mean we like the same products." Of course, just how much value this holds for the advertisers depends on consumer interest, Mr. Boker said.

While movies and TV shows will be the first items available for purchase, HitBliss is already in conversations with other potential partners, including game and app developers.