Damn Yankees: How ESPN Got Ben Affleck to Pay Tribute to Derek Jeter 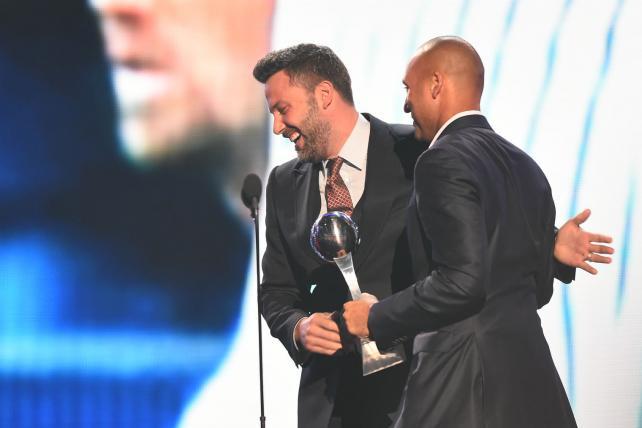 When you're brought up in Boston, you learn to hate the New York Yankees in the cradle. So jaws hit the floor from Charlestown to Southie when actor Ben Affleck, a rabid Red Sox fan, presented Yankee great Derek Jeter with the Icon Award during the 2015 ESPYs.

Mr. Affleck's Yankee-loathing is so profound that he outright refused to wear a Yankee hat in a pivotal scene in the 2014 film "Gone Girl." So how exactly did ESPN manage to convince him to pay tribute to the man who for 20 years was the face of the Evil Empire?

As it turns out, Mr. Affleck was the first person ESPN approached to present the award to the future first-ballot Hall of Famer. And such is his admiration for Mr. Jeter that he all but jumped at the idea.

"The idea was kicked around in the office -- 'Who would be the least likely Yankee fan or New York City person to do this?'" recalls ESPYs co-executive producer Maura Mandt. "I said, 'Ben Affleck.' We had the creative we wanted -- to be able to show that Derek Jeter was a guy even his rivals couldn't really hate. So Ben's name was first on list."

Mr. Affleck went all-in, writing his own intro and delivering it with a warmth that belied a lifelong aversion to all things pinstriped.

"If you're from Boston, you always wanted to hate our next honoree. But there was something about him that made the 'boos' ring a little hollow," Mr. Affleck said. "Boston sports fans can be many things, but we know baseball, and we respect those who play the game the way it was meant to be played."

The actor went on to acknowledge that Mr. Jeter had broken his heart "100 times, if not more" before tipping an invisible hat to the retired ballplayer. "You made the game better for everyone."

After a Jeter's Greatest Hits montage, the honoree embraced Mr. Affleck before telling the crowd at Los Angeles' Microsoft Theater, "I just told Ben I know it pained him to say every one of those words."

After the show, ESPYs co-executive producer Connor Schell credited Ms. Mandt for making the moment happen. "Maura has worked for 20 years to build the credibility to be able to put together moments like that," he said. "She has built credibility for herself and the show and when she asked Ben, he was happy to pay tribute to Jeter because he clearly respects him a great deal."

Whether the actor will ever again be able to show his face inside Fenway Park remains to be seen.

According to Nielsen live-plus-same-day data, ABC's broadcast of the ESPYs drew 7.75 million viewers and a 2.2 in the adults 18-49 demo, making it the night's most-watched, highest-rated show.

This marked the first time the 23-year-old ESPYs were broadcast on ESPN's sibling net, ABC. The 2015 edition out-delivered the similarly scaled TV People's Choice Awards, which drew a 1.8 demo rating to CBS on Jan. 7, but was outpaced by ABC's May 17 coverage of the Billboard Music Awards (3.8).