For a movie fan with cash to burn, "The Hobbit: The Desolation of Smaug" offers the chance to drop almost $40 before even getting to the snack bar. 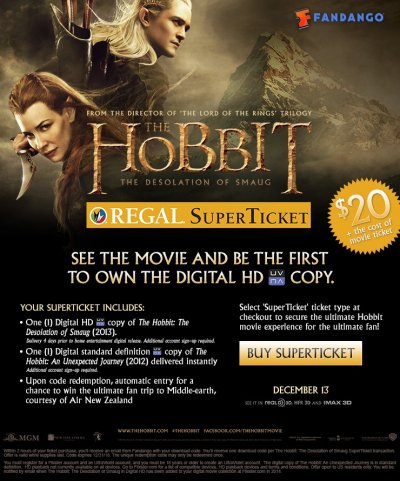 So-called super tickets for the second film in Peter Jackson's trilogy, opening at midnight in the U.S. and Canada, include a seat in the theater plus an advance online copy for mobile or home viewing and an online version of the first picture, "The Hobbit: An Unexpected Journey."

Time Warner's Warner Bros., the distributor, and two of the largest North American theater chains, Regal Entertainment Group and Cineplex Inc., are using "The Hobbit" deal to squeeze out extra revenue at a time when U.S. movie spending shows little growth. Exhibitors, who are opening more large-screen cinemas with reclining and reserved seating and with better sound, get some of the added revenue.

Rottentomatoes.com, a website that aggregates reviews, gives the 161-minute film a 73% positive rating, compared with 65% for the original.

Market researcher BoxOffice.com estimates "The Desolation of Smaug" will take in $80 million over the three-day weekend in U.S. and Canadian theaters and about $280 million through its entire domestic run.

"An Unexpected Journey" opened with $84.6 million, generated $303 million in U.S. theaters and went on to do $1.02 billion worldwide, according to Box Office Mojo, another researcher. That places the movie second among the four films Jackson has made based on the works of J.R.R. Tolkien, including the "Lord of the Rings" trio from 2001 to 2003.

Warner Bros. tried out the super-ticket promotion earlier this year with Toronto-based Cineplex and the film "Pacific Rim." Now it's expanding with "The Desolation of Smaug."

For Cineplex, the film marks the fourth and largest super- ticket offering. The 1,635-screen chain, the No. 5 North American exhibitor, offers its own cloud-based web service where fans can store and access their movies.

"Pacific Rim was much better than we anticipated, being the first time out of the gate," said Ellis Jacob, Cineplex's president-CEO. "I don't know if it was because the techies loved it. We were worried because it wasn't a film that was following a prequel."

At a Toronto Cineplex, a super ticket in an UltraAVX 3-D auditorium costs about C$38 ($36), or C$18 without online rights, according to the company's website. Regal's theater in the Union Square neighborhood in New York City is charging $39 for a super ticket to a 3-D showing and $19.00 for a non-super, 3-D ticket.

"The Hobbit: The Desolation of Smaug" is opening in about 3,900 North American locations, according to Warner Bros., including as many as 3,300 that offer 3-D showings. More than 300 will be premium large-format theaters, Mr. Fellman said in an interview. Warner Bros. also has a lock on almost 350 large-screen Imax theaters, which also charge more.

Premium-priced formats now represent about 40% of the box office for Cineplex, according to Jacob.

Some theater chains are hosting double features, starting with the first "Hobbit" at about 9 p.m. tonight before the new film's midnight debut. The ticket costs about $20 at a Cinemark Holdings Inc. theaters across the U.S., according to James Meredith, a spokesman.

As with the first Hobbit picture, the film's profitability will hinge more on sales outside the U.S., according to Paul Sweeney, a Bloomberg Industries analyst.

"The international market has become much more important for these tentpole, franchise films," Sweeney said in an e- mail. "International can make or break a big-budget movie these days."

The budget to produce three "Hobbit" films may approach $600 million, according to published reports in October based on documents filed in New Zealand, where the movies were shot. The third film, "The Hobbit: There and Back Again," is scheduled for release in December 2014, according to Box Office Mojo.