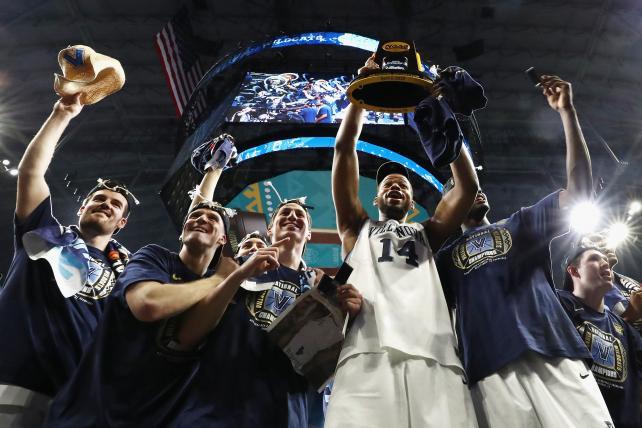 A month after ratings for the Oscars fell to an all-time low, another spring TV juggernaut has reached a rather unwelcome milestone as Turner's coverage of the NCAA Div. I Men's Basketball Tournament National Championship Game delivered historically depressed numbers.

According to Nielsen live-plus-same-day data, Villanova's 79-62 blowout of Michigan on Monday night averaged just shy of 16 million viewers on TBS and its cable network siblings TNT and TruTV. When streaming via the NCAA March Madness Live app was blended in with the linear TV deliveries, 'Nova's decisive victory served up an average-minute audience of 16.5 million viewers.

Turner's blended deliveries marked a 28 percent decline from CBS' broadcast of last year's North Carolina-Gonzaga title tilt, which averaged some 23 million viewers. 'Nova-Michigan also served up a 5.4 rating, which translates to 6.52 million adults 25 to 54, down 31 percent versus CBS's year-ago draw of 9.49 million members of the demo.

With streaming accounting for just 3 percent of the championship game's overall audience, the Turner cable nets had little chance of posting the sort of numbers that CBS put up a year ago. Per Nielsen estimates, Turner's primary March Madness outlet, TBS, reaches 91.4 million households, or just over three-quarters (76 percent) of the nation's 119.6 million TV homes. Nearly every TV home has access to legacy broadcast network CBS. When faced with a shortfall of more than 26 million households from the jump, a ratings slide is all but inevitable.

Indeed, Turner went through a similar pinch in 2016, the year the March Madness finale first hopped over to cable TV. Two years ago, the Villanova-UNC game averaged just 17.8 million viewers and a 10.6 household rating on TBS/TNT/TruTV, making it the fourth least-watched and lowest-rated NCAA final on the books—until now. 'Nova's dismissal of Michigan featured none of the drama of the team's 2016 championship, which was secured when Kris Jenkins drained a three-pointer at the buzzer. By comparison, Monday night's less enthralling game was down 7 percent in total viewers and nearly 10 percent in the final household rating.

Villanova's dominance over its bracket culminated in the most lopsided NCAA final since 1992, when Duke steamrolled Michigan by a score of 71-51. As it happens, that one-sided contest still stands as the second most-watched men's hoops title game on record, as CBS averaged 34.3 million viewers. (That so many fans stuck around for such an anticlimactic game speaks volumes about the two teams involved. The week before taking on the Wolverines, Duke had won what is still considered the single greatest college basketball game ever played, beating Kentucky 104-103 courtesy of The Shot. Michigan, meanwhile, fielded the formidable Fab Five, an all-freshman unit that included Jalen Rose, Chris Webber and Juwan Howard.)

As much as the shift from broadcast to cable has played an instrumental role in the erosion of the title game's ratings, the alternate-year schedule isn't going away anytime soon. Per terms of the 2010 deal that split the March Madness rights between CBS and Turner (and the subsequent $8.8 billion extension hammered out two years ago), the Final Four and National Championship will trade hands every year through 2032.

The language of the extension aside, Turner's big-time sports portfolio justifies the outsized carriage fees it charges cable, satellite and telco TV providers for its signal. For example, according to SNL Kagan estimates, thanks in large part to its NBA and college basketball packages, TNT commands a carriage fee of $2.09 per sub per month, giving it boasting rights to the second-highest affiliate rate behind ESPN's herculean $7.86. TBS, for its part, is the seventh priciest national cable channel, with an average fee of $1.02 per sub per month.

If March Madness goes a long way toward bolstering Turner's affiliate revenue, the ad dollars are nothing to sneeze at either. Kantar Media last month estimated that the 2017 tourney generated some $1.29 billion in ad sales, slightly up compared to the $1.24 billion the two partners pulled in the previous year. Per Kantar estimates, March Madness "ad expenditures have been growing 3 to 5 percent per year, which roughly tracks with the rights fee increases CBS and Turner are paying."

As one might expect, NCAA Corporate Partners such as Capital One, General Motors, AT&T Wireless and Samsung Mobile are among the biggest advertisers in and around the tournament. According to iSpot.tv data, Capital One was not only the most visible March Madness backer, airing 13 different spots in 188 windows, but it also received the most ad impressions (647.4 million). In exchange, the credit card company handed CBS and Turner some $40.8 million in TV spend.

Samsung Mobile had bragging rights to the tourney's most-seen individual ad, as iSpot.tv estimates that the company's 30-second spot touting the Galaxy S9 phone scared up 383.5 million impressions. If the description doesn't ring a bell, Google Aston Merrygold's "Get Stupid." If you could swear you heard that song more often than you heard CBS broadcaster Bill Raftery leaning into one of his catch phrases ("Onions!"), you're not too far off base; per iSpot, Samsung ran the Galaxy spot 76 times during the 67-game tourney.

All told, iSpot estimates that 142 brands ran 391 ads during March Madness, for a grand total of 6,761 airings. This barrage of commercial messaging generated 20.8 billion impressions.