A Top Basketball Rumors Site Cashes in on Free-Agency Suspense

How Hoopshype Makes the Most of Two Massive Traffic Spikes Every Year
READ THIS NEXT
Forget ‘The Sopranos’ and ‘Game of Thrones’: HBO Max’s top hits are for kids 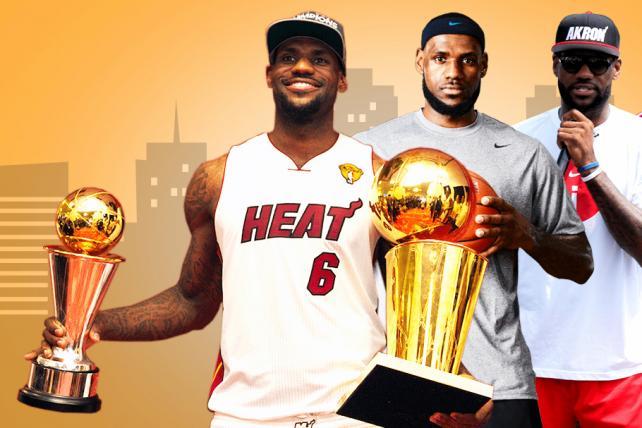 From LeBronJames.com, which crashed as fans searched for word on his latest decision.
Credit:

Every day of this month, NBA fans around the world have been obsessing over a handful of questions:

Which team is LeBron James going to sign with? [UPDATE: IT'S THE CLEVELAND CAVALIERS.]

What is going to happen to the Big Three in Miami?

And during that time, those same diehards have been obsessively checking Hoopshype's rumors page, driving a traffic bonanza that marketers try to take advantage of in a variety of ways. (Those same diehards reportedly crashed LeBron James's website earlier this week.)

Hoopshype is a basketball news and content website best known for its rumors section, which aggregates gossip about player movement and other possible free agency developments. Its frequently updated list of insider's tweets and journalists' scoops is catnip for NBA junkies, including insiders like Marc Stein, who covers the league for ESPN.com.

"I check HoopsHype's rumors page on my phone before I get out of bed every morning," said Ben Golliver, who covers the NBA for Sports Illustrated.

And though NBA obsessives scan the site year-round, Hoopshype transforms into a hub of required reading for casual fans twice a year: from late January to mid-February, in the run up to the NBA's midseason trade deadline, and in July, the official start of NBA free agency. According to ComScore, Hoopshype hauled in more than 16 million page views last July, more than two and a half times as much traffic as the site received during the most recent NBA season. This past January and February, the site pulled in more than 6.9 million and 7.1 million page views, respectively.

And while free agency generates a requisite amount of intrigue for NBA junkies every single year, traffic has spiked even more sharply than usual this year because top talents like Mr. James and Mr. Anthony are available.

"This year, with the caliber of players you have available, it increases the kind of excitement," said Chris Pirrone, the general manager of USA Today Sports, which acquired Hoopshype from a company called Fantasy Sports Ventures in 2012.

ComScore figures for July 2014 are unavailable, but according to Mr. Pirrone, Google Analytics shows that over the first 10 days of this month, traffic is up 15% from the same time period last year. New site users are up 30%.

Cashing in
USA Today does not increase Hoopshype's ad rates during the free agency rush, but it focuses on selling site takeovers and broader partnerships, which it begins pitching to brands up to six months in advance.

So far this month, buyers have included Adidas, Showtime (which also took over a number of other USA Today Sports properties), UFC and American Family Insurance.

Some, like Adidas, take over the entire site to promote new basketball shoes, which they think will be attractive to basketball fans of every stripe.

But others, like the Dallas Mavericks owner Mark Cuban, have used direct buys to target a much more specific slice of the site's readership.

Last year, Mr. Cuban decided he wanted to sell players that might have been considering coming to play for his team, so he skinned Hoopshype's rumors page with ads extolling the virtues of Dallas Mavericks players and the city of Dallas itself.

"That's kind of the way we backdoor promote ourselves," Mr. Cuban told the Dallas Morning News.

Mr. Pirrone said that the Hoopshype model is part of a larger strategy at USA Today sports to acquire and build properties that have enthusiast audiences engaged around specific sports, events or teams.