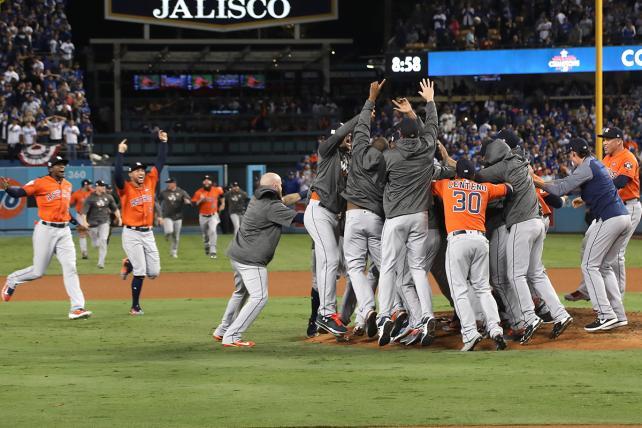 The Astros celebrate defeating the Dodgers 5-1 in game seven to win the 2017 World Series at Dodger Stadium on Wednesday.
Credit: Photo by Jerritt Clark/Getty Images

The 2017 World Series was a blast, both literally and figuratively, and while Game 7 was something of an anticlimax in light of all the drama that preceded it, the final ratings numbers exceeded all expectations.

Houston's 5-1 victory Wednesday night gave the ball club its first MLB title since it entered the National League as an expansion team back in 1962. And if the game was hardly a gem (the Astros scored enough runs in the top of the first to win the contest outright), advertisers could hardly be disappointed by the size of the audience that tuned in to Fox's coverage.

According to Nielsen live-same-day data, baseball's season finale averaged 28.2 million viewers and a 15.8 household rating, beating out two of Fox's five previous Game 7 broadcasts. In 2014, the San Francisco Giants clinched against the Kansas City Royals by a 3-2 margin in a game that averaged 23.5 million viewers and a 13.7 household rating, while 25.4 million viewers watched the St. Louis Cardinals close the books on the 2011 Fall Classic with their 6-2 victory over the Texas Rangers. That game did a 14.7 rating.

Setting aside the Chicago Cubs's historic extra-innings triumph over Cleveland in last year's World Series, which scared up a whopping 40 million viewers, Wednesday night's game was Fox's most-watched MLB broadcast since the Red Sox swept the Cardinals in the fourth frame of the 2004 World Series. That game averaged 28.8 million viewers.

Game 7 now stands as the most-watched TV broadcast of the young 2017-18 season, edging Fox's Sept. 17 presentation of a Cowboys-Broncos NFL game that delivered 26 million viewers and a 14.3 household rating. That showdown did, however, edge the older-skewing World Series capper in the ad demo, drawing an 8.5 rating, good for around 11 million adults 18 to 49. By comparison, the Astros-Dodgers finale did an 8.2 rating, which works out to 10.5 million adults 18 to 49.

To put that 8.2 demo in context, Fox's highest-rated scripted episode of the fall season so far was a Sept. 10 preview of its new space opera "The Orville," which delivered a 2.7, or around 3.5 million adults 18 to 49, leading out of Fox's first national NFL window.

As it happens, Game 7 was this season's youngest-skewing World Series broadcast, serving up an audience with a median age of 53 years old. The median age for the entire series was 55 years, up a smidgen from the year-ago 53.8 years and 54.6 years for the 2015 Royals-Mets set.

While it's admittedly a subjective metric, the 2017 World Series is going to be remembered as one of the most entertaining rollercoaster rides in baseball history. Five of the seven games were decided by one or two runs, including Houston's 7-6 Game 2 victory, which featured no fewer than eight home runs. (Five of those dingers were hit in extra innings.) Together, the Astros and Dodgers clobbered a record 25 balls over the fences, and this in a series that showcased some of the game's greatest pitching talent.

All the dizzying events of those seven autumn nights added up to a robust audience for Fox's advertising partners. The network averaged 18.7 million TV viewers over the course of the series, making it the third most-watched Fall Classic in the last 10 years. Only the Cubs-Indians showdown, which averaged 22.8 million viewers, and the New York Yankees's victory over the Philadelphia Phillies in 2009 (19.3 million) put up bigger numbers.

Among the top advertisers in this year's World Series were Chevrolet, T-Mobile, YouTube TV, Geico, Progressive, Ford, Budweiser, Lincoln Motor Co. and Taco Bell. T-Mobile on Wednesday night announced that it is donating north of $2.5 million to hurricane recovery efforts in the wake of its postseason #HR4HR campaign.

Chevrolet and T-Mobile, which were two of the biggest investors in the World Series with a combined 41 ad units, also enjoyed the highest social media lift, per data cruncher 4C Insights. Thanks in large part to its hashtag hurricane campaign, T-Mobile attracted nearly 195,000 social engagements throughout the series. Per 4C, other brands that played a heightened part in the social media conversation around the games were big spenders like Geico, Taco Bell and Progressive.