Amid Continuing Blackout, Medium Is the Only Game in Town
READ THIS NEXT
How Amazon Prime Video CMO Ukonwa Ojo is positioning the brand in the streaming wars

Batteries are drained, internet connections long-gone. For the nearly 5 million households muddling through a fourth day without power in the wake of Hurricane Sandy, there's really only one medium that matters, and that 's radio. 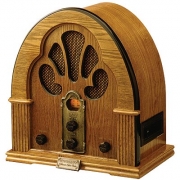 It's an incongruous feeling, in an era of status updates and hashtags, how quickly and how easily the tools that revolutionized communications -- indeed, even fomented revolution -- simply go poof! And what remains is a version of 1932: families gathered around the radio, waiting for a bit of information on where to go or what to do next.

That's the reality this week for millions of residents of New Jersey, New York, Connecticut, Maryland, Delaware, Pennsylvania, Virginia and West Virginia. Websites went down and laptop charges ran down in hours. But most radio towers are built to withstand hurricane-force winds and have generator backups with 8 to 10 days of fuel on hand. And if your radio's batteries die, you can buy new ones at the store.

Radio, the first electronic mass media, has become the only game in town.

"It's almost comical -- I was watching some media and they were telling people to go to Facebook, and I thought, 'Wait a minute, when the power goes out, within 8 hours your charge is gone, your internet is out, your phone is probably out. What do you have to rely on? A battery-powered radio,'" said Eric Rhoads, publisher of Radio Ink, a radio-industry news publication.

"I don't know what the numbers are but I would imagine they are extremely high," said Michael Weiss, president of sales for CBS Radio. "The news stations become a utility in a time of emergency. We were talking today about where you can find gas."

Like all local stations, CBS Radio prepared for the worst, expecting its WCBS broadcast facility on City Island was most vulnerable. Instead, it was the transmitter for 1010 WINS in Lyndhurst, N.J., that was inundated, forcing a switch to the FM dial. Both stations share a studio in lower Manhattan in the flooded zone and are running on backup power.

Not easily monetized
Large, unexpected surges in audience are notoriously difficult for media companies to turn into ad dollars. For radio stations and networks, bigger audiences can mean more ad revenue, but that 's usually balanced out during major news events as stations run fewer ads. New York-area stations, for example, have been running statements from New York City Mayor Michael Bloomberg and New Jersey Governor Chris Christie live this week, and have scaled back ads in favor of delivering emergency-related information.

Their news-gathering costs have also gone up. ABC Radio rented 25 hotel rooms for staff and armed crews with generators and satellite phones to make sure they stayed on the air through the disaster.

"We are the original wireless communication," said Steve Jones, VP of ABC Radio. "We are there in the house for most people and we became a critical lifeline of information during this storm."

But some advertisers with schedules in place, such as Linda McMahon's Senate campaign in Connecticut, end up getting huge numbers of impressions they didn't pay for. "Any federal advertising, radio is required to run," said Mary Beth Garber, exec VP of radio analysis at Katz Media Group. "We cannot preempt or refuse it."

Some advertisers, such as auto dealerships, would rather not run during a storm. But others flock to storm coverage. Huge insurance companies such as Geico and AllState, for example, have emergency ad budgets that they release to buy spots in affected areas. Geico changed its creative at the last minute to give information on how to file a claim. Automotive advertisers with four-wheel drive vehicles also like to buy around disasters, as well as snow storms and school closings.

Then there are the local businesses looking to capitalize on the clean-up, such as water-damage experts, sellers of generators, tree surgeons, roofers and home-improvement chains such as Home Depot and Lowes. Some of these advertisers will keep it up for weeks after the disaster. And let's not forget Con Ed, which also relied heavily on radio this week.

Most of Manhattan is expected to regain electricity by some point on Saturday but other parts of New York City and elsewhere are expected to remain without power for days longer.