The tabloid plays off of its famous ‘Ford to City: Drop Dead’ headline 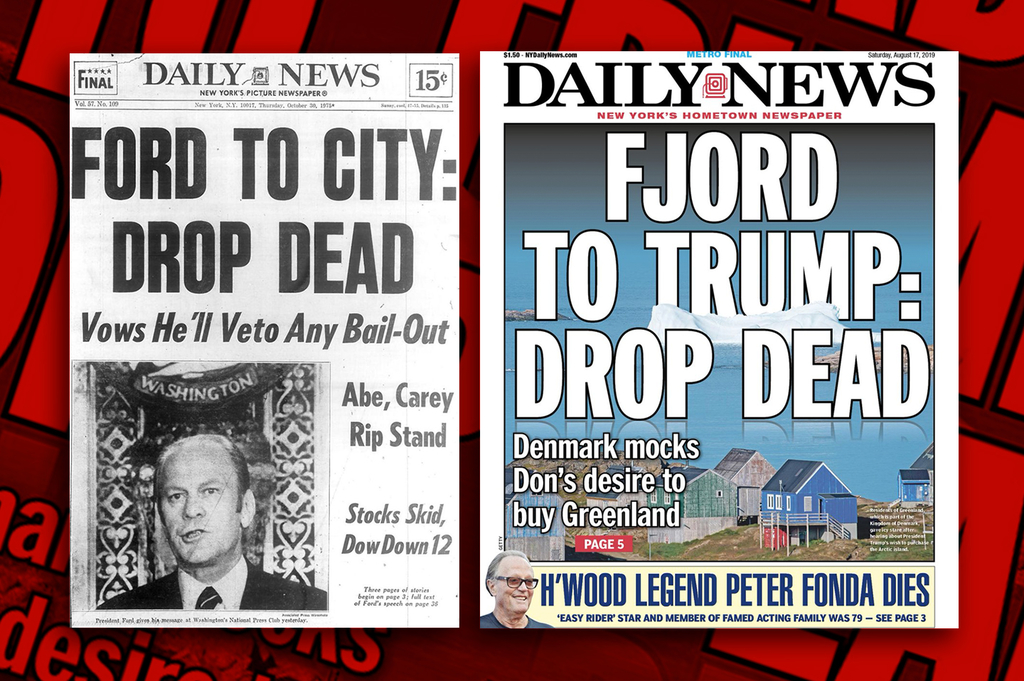 As a part of Ad Age’s continuing media-about-media coverage, a quick look at how various news outlets are spinning a certain presidential obsession.

President Donald Trump’s reported interest in trying to buy Greenland continues to make headlines; just this morning, for instance: “No Joke: Trump Really Does Want To Buy Greenland” (NPR), “Why does Donald Trump want to buy Greenland?” (The Guardian) and “Denmark to Trump: Seriously, Greenland Isn't for Sale” (Vice). The story originated in The Wall Street Journal last Thursday (“President Trump Eyes a New Real-Estate Purchase: Greenland”), but for our money the best—and most meta—headline came over the weekend, when the New York Daily News played on Denmark’s expressed emphatic disinterest in parting ways with the property (Greenland, the world’s largest island, is an autonomous country of the Kingdom of Denmark).

“FJORD TO TRUMP: DROP DEAD” the tabloid’s front page blared on Saturday in a self-referential homage to arguably the most famous Daily News cover headline of all time: “FORD TO CITY: DROP DEAD” from October 30, 1975, when then-President Gerald Ford decided he didn’t want to bail out financially troubled New York City. To really land, the ‘FJORD’ headline requires not only knowledge of history, but media history, and not just a grasp of geography, but topography. Anyway, in this excruciatingly dumbed-down moment in history, thanks for having a little faith in us, Daily News!