Music has been the focus so far for major streaming audio players like Pandora and Spotify, but Clear Channel's iHeartRadio is now trying to gain new listeners by embracing talk as well. 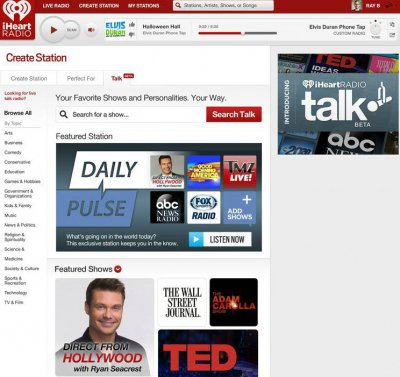 IHeartRadio is now highlighting talk in addition to music

Its new iHeartRadio Talk is offering listeners thousands of "audiosodes" from The Huffington Post, Mashable, Ryan Seacrest, Wall Street Journal and Univision as well as ABC shows including "Good Morning America," "Jimmy Kimmel Live" and "The View." The service will also include "Daily Pulse," a customizable talk channel.

Like its custom music stations, which were introduced in 2011, the talk service will let users indicate their preferences as tracks automatically play by hitting a "thumbs up" button or "thumbs down" to skip to something else. Unlike with music, however, talk listeners will be able to rewind and won't face limits on the tracks they skip.

There have been several startups that have attempted to become the "Pandora of talk radio," including Swell, which let users to fine-tune recommendations in a manner similar to Pandora, and Stitcher, which helps people discover on-demand radio for everything but music. Swell raised $5.4 million in a round of financing earlier this month. According to the company, users listen on average to 40 minutes per day.

Another startup, Stitcher, helps people discover talk podcasts and "stitch" them together into playlists.

Talk radio is still a big part of terrestrial radio's appeal, making up 16% of all listening on Clear Channel stations, according to the company. Spoken word formats have an 11.4% share of the overall radio marketplace, according to Arbitron's 2013 "Radio Today" report.

The company hopes advertisers will prove interested in creating branded talk channels, something marketers such as Macy's have done with IHeartRadio's custom music channels. "Audiosodes" could also be created around categories like auto, fashion and entertainment for brands to sponsor.

Listeners, meanwhile, will be able to create their own talk programming through a partnership between iHeartRadio and a startup called Spreaker. Clear Channel plans to use the function to discover new talent and up-and-coming radio personalities.