Once a Fairly Private Affair for Buyers, Now Mapped by Apps 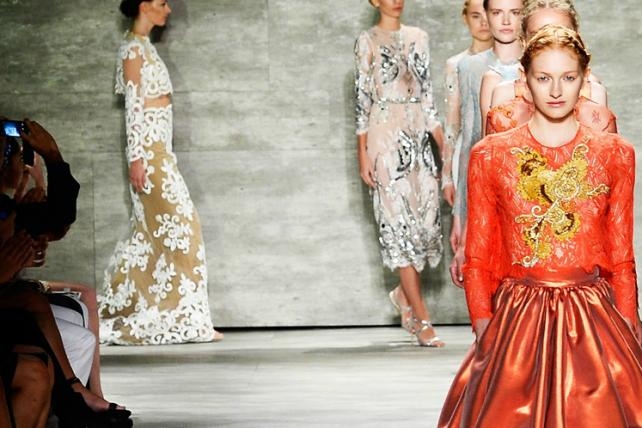 Models clad in indigo fur-collared jackets, sequin-emblazoned dresses and feather-lined skirts make their way down the runway. And fashion fans don't even need a ticket to get a prime view from the front row at Rodarte's show.

Enthusiasts the world over just need to download Snapchat's app.

At New York Fashion Week, there has been a rise in Snapchat use among fashionistas, like Lucky Magazine's Editor-in-Chief Eva Chen and "Man Repeller" blogger Leandra Medine. Rather than just sending posts to friends that disappear within seconds, they're using Snapchat's public "story" feature to let followers see a compilation of photos and videos from the last 24 hours. It's yet another way that the startup is gaining traction at a time when it's said to be seeking a valuation as high as $19 billion.

"It's about bringing people along with you," said Neha Gandhi, vice president of editorial strategy at media outlet Refinery29, which is using Snapchat at fashion week for the first time this season. "Everyone gets to take a look around and honestly share it. There's transparency in Snapchat."

Refinery29, which established its presence at fashion week in 2007 with photos of attendees' garb on the street outside the events, is now increasing its use of Snapchat. It's assuring the app is in the hands of editors who populate the "story" on the outlet's account, helping Refinery29 reach a devoted audience of smartphone-tethered teens and women in their 20s.

The ephemeral moment-sharing has caught on since Snapchat's founding in 2011, with users sending more than 700 million disappearing "snaps" and viewing more than 500 million stories daily.

Backstage photos
In September, Snapchat encouraged users at fashion week events to send snaps to an aggregated public feed, called "Our Story." This year, fashionistas have migrated to populating their own stories, instead.

It's a platform that works for fashion week, which runs until Feb. 19, because everyday users are eager to see the first-hand experiences of celebrities and fashion icons at the exclusive event.

"Snapchat really lends itself to the behind-the-scenes and backstage sharing, and consumers are really craving that," said Claude de Jocas, director of the intelligence group at researcher L2 Inc. "It's helping consumers see past that gloss of fashion week and giving them authenticity."

New York Fashion Week wasn't originally this public an affair. Traditionally, designers would show off their garb to buyers, who would write orders.

Spreading publicity
"Now it's an opportunity for a brand to present their stuff in a controlled environment," Scott Galloway, who teaches marketing at New York University's Stern School of Business, said on Bloomberg Television Tuesday. "It's all with the hope that well-heeled attendees will take a ton of pictures and spread it to a much broader audience."

With the majority of the "stories" not coming from fashion brands themselves, there's an incentive for designers to fill their seats with chic Snapchatters that have a strong following, L2's Mr. de Jocas said.

Refinery29 filled its feeds with snaps of Kendall Jenner, of Kardashian family fame, walking the runway in a deep purple ball gown at the Oscar de la Renta show. Isabel Wilkinson, senior editor for New York Magazine's The Cut, snapped beret- wearing models crossing a runway made of turf at the Marc by Marc Jacobs show.

"Brands are trying to get that PR grab," Mr. de Jocas said. "The consumer is going to move where that influencer is."