Insurers Shy Away From the Geico Guy

NEW YORK (AdAge.com) -- On Oct. 2, ABC will premiere its high-profile sitcom "Cavemen," based on Geico's popular ad campaign. But the show is proving to be a hard sell to rival insurers -- who collectively spent $1.4 billion last year advertising auto coverage alone -- and even the marketer whose characters inspired the idea isn't sure how it will support ABC's Tuesday-night show. Welcome to the perils of branded entertainment's blurry line.

Few insurance companies, Geico included, seem willing to advertise during ABC's upcoming sitcom 'Cavemen.'
Credit:
Gale Adler
Aflac is steering clear. The company said its broadcast ad dollars on Tuesday nights will be "concentrated" on "NCIS" and "The Unit" on CBS, which "better reach" its target audience. And New York Life's media buyer won't put his client's ads in the show either. "Why would you want to put your ad in somebody else's ad?" asks Gene DeWitt of DeWitt Media Options. "Basically, the whole show is a program-length commercial."

While other insurers aren't saying they will ban appearances in "Cavemen," they aren't exactly endorsing the program. State Farm VP-Advertising Mark Gibson said he's not yet decided whether to run ads in "Cavemen" but plans to make a decision within two weeks. A spokeswoman for Progressive said the company has not completed its fourth-quarter ad buys but tends "to be cautious about new shows because they don't have a proven history." A spokesman for Allstate also said the company hadn't finalized ad buys for the coming season, though several media buyers said by this time most advertisers typically are well aware of where their ads will run for the first several weeks of fall programming.

Even Geico unsure
Executives at Geico, too, are feeling cautious about how to work around the show its own ads inspired. Geico's ad plans for the program "have not been firmed up yet," Ted Ward, Geico's VP-advertising, said in an e-mailed statement. He said Geico is "not in control of any of the show's content or messages" and "has no creative input nor script review/approval rights."

"Cavemen" is coming out of ABC's programming arm and is not a show deliberately created as a promotion for Geico, the Berkshire Hathaway insurance company whose ads got the erudite Neanderthals their first taste of the spotlight. But there's no getting around the fact that viewers can't help but associate the cavemen with the insurer.

Meanwhile, a bevy of other networks are dabbling in concepts that give a specific advertiser a huge spotlight. CW runs ads of varying lengths that give marketers more of an edge over those with regular commercials during the same show, for example, and MTV Networks has run full programs based on concepts for Axe products. Nissan's association with NBC's "Heroes" is hard to miss. While these partnerships have obvious benefits, the networks that create them also face a looming threat: How do they keep some marketers from walking away when others are clearly getting more of a spotlight in a particular show or on a specific evening?

"Clearly, without question, this is the way of the future," said Michael Yudin, managing director of Carat Entertainment. "It presents a great challenge to everybody."

Piece of the pie
Although deep-pocketed in general, insurance advertisers aren't among ABC's biggest spenders. Combined, Aflac, New York Life, Progressive, State Farm and Allstate spent about $64.3 million on ABC in 2006, according to TNS Media Intelligence. So creating a show that gives one insurer a boost over others may not be that big a deal when a top advertiser such as Procter & Gamble spent about $192.4 million on ABC in the same year.

An ABC spokeswoman said there's no issue with "Cavemen"; Geico will not run ads featuring the cavemen characters during the program, and sponsors who don't want to be in the show can pick from other ABC prime-time programming.

Even so, Aflac doesn't feel it's a good place for its ads to shine, said Liz Daney, senior VP-chief media officer at Interpublic Group's Fitzgerald & Co., which handles the insurer's media strategy. "Insurance can be a category where we want to make sure we are differentiating ourselves from the others," she said. "So naturally, being in an environment that has all of the additional assets from Geico behind it -- we didn't want to put our dollars there." 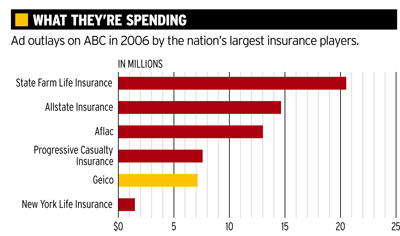