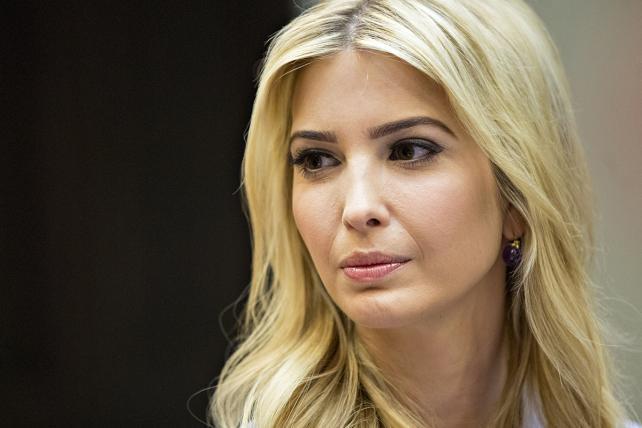 Ivanka Trump in the Roosevelt Room of the White House on Monday, March 27, 2017.
Credit: Andrew Harrer/Bloomberg

Ivanka Trump is one of the most famous women on the planet. She's certainly the most famous Ivanka. Standing by her father's side as he ascended to the White House, her prominence even sparked a swell in the number of babies named Ivanka.

As the president's eldest daughter, she has carefully sculpted her image since first entering public view as a judge on his reality television show. Now with a position in his administration, the 35-year-old's skyrocketing fame has quickly made her first name a mononym -- like Oprah or Cher.

But in this case, all publicity isn't necessarily good. Ivanka, who like her father is a brand as much as a person, has launched an international legal effort to protect her name. Even her first name. In China, where she's held up as a model of success in some quarters, local entrepreneurs are rushing to grab trademarks for Ivanka Trump. They hope to make a killing on everything from sanitary napkins to chewing gum bearing the Ivanka label.

As part of her intellectual property strategy, Trump's company filed a series of applications to trademark just the word Ivanka in China. Abigail Klem, president of the Ivanka Trump brand, said that "a surge in trademark filings by unrelated third parties" prompted the company to move quickly to assert its rights "in regions where trademark infringement is rampant."

In the U.S., Ivanka Trump is also moving to block anyone who would seek to profit from her name. In December, her intellectual property holding company, Ivanka Trump Marks LLC, moved to register a trademark for "Ivanka" on fashion items ranging from dresses and skirts to scarves and ponchos. Over the past five years, the company has sought similar first-name trademarks in categories such as jackets, handbags, eyewear and a variety of home goods from pillow shams to cookie jars.

For now, a spokesperson said the brand has no immediate plans to drop the Trump surname from her existing products. But obtaining the trademark on just her first name will give her that option.

The "Ivanka" trademark in the U.S. was filed as an "intent to use," which places it off-limits to others. After it's approved, the holder must eventually submit proof that it's being used within a certain time-frame.

As her fame increases, Ivanka's ability to defend her trademarks will strengthen. Even if her brand doesn't drop the Trump name, it will become increasingly difficult for, say, a budding fashion designer also named Ivanka to sell under that moniker.

"We really have never had a first family so interested in exploiting their names as a consequence of the inherent exposure that they get from the presidency," said Michelle Mancino Marsh, an intellectual property lawyer at Arent Fox who specializes in fashion law. "Ivanka is now probably considered a famous brand."

When Ivanka Trump started her fine jewelry line in 2007, she and her partners debated whether to use her first or her full name, according to her 2009 book. "Looking back, I think my first name would have worked quite nicely, being that it is very distinctive," she wrote. "But we all realized that if we were looking to expand into an international market, it would be a huge missed opportunity to leave the Trump name on the cutting room floor."

Soon, her brand began licensing the full Ivanka Trump name to make a line of work-appropriate apparel, shoes and affordable leather handbags. By using her last name, Ivanka Trump was capitalizing on decades of brand-building her father had already done. As she saw it, Donald Trump was "a name that already represented luxury, glamour, wealth and aspiration." She wanted to capture that for her fledgling brand, too.

"There was built-in name recognition, so it'd be foolish to set my birthright aside in favor of something generic," she wrote. The branding worked, and the Ivanka Trump label grew to include a $100 million clothing line manufactured by G-III Apparel Group, as well as shoes and jewelry.

But the brassy, big money New York evoked by her father's name ceased being a regular brand asset as the 2016 campaign intensified. As president, Donald Trump further polarized opinion about his own brand, affecting his family, and by extension their business endeavors. Since the election, Ivanka's brand has suffered, with organized boycotts and a steady drumbeat of retailers dropping her lines.

Then there was the question of conflicts of interest. Ivanka Trump is now an official, unpaid federal employee with a West Wing office. In January, she announced she was giving day-to-day management of her brand to Ms. Klem, her company's president, though she doesn't plan to divest, says Jamie Gorelick, Trump's attorney (and a former top Justice Department official under President Bill Clinton). Instead, Ms. Trump transferred the brand's assets to a trust overseen by relatives of her husband, Jared Kushner. She retains ownership and receives payouts, however.

"I have heard the concerns some have with my advising the president in my personal capacity while voluntarily complying with all ethics rules," Ivanka Trump said in a statement March 29. "Throughout this process I have been working closely and in good faith with the White House counsel and my personal counsel to address the unprecedented nature of my role."

But those aren't the only concerns about how her official role may influence her ventures. Ivanka Trump Marks LLC has filed 173 trademarks in foreign countries over the past decade or so, according to The New York Times. Some were filed after her father took office. Since then, Ivanka Trump has met with such world leaders as Japan's Shinzo Abe, China's Xi Jinping, and Canada's Justin Trudeau -- all nations in which her company has filed trademarks.

While there are unprecedented conflict of interest issues surrounding the Trump family, the situation that gives rise to them is, ironically, a benefit to Ivanka's brand: Her role inside the White House gives her even more ammunition with which to claim exclusive intellectual property rights to her name.

If a name has become ingrained in the consumer mind, it's more easily protected. If Ivanka Trump wasn't considered famous in 2015, everyone surely knows who she is now. Having the occasional magazine ad and bus shelter plastered with your face is one thing. Being on the network news every night is quite another. It would be difficult to argue she's not the best-known Ivanka out there -- and that's bad news for lesser known Ivankas.

"There are some registrations owned by people named Ivanka," said Donna Tobin, a trademark lawyer at Frankfurt Kurnit Klein & Selz. If they filed new trademarks, they would likely get rejected, at least initially, and be forced to argue they're not trying to mislead shoppers, she said.

Arguably, Ivanka's name is on its way to being as distinctive as Beyonce and Madonna. Someone like her little sister though would have a harder time. Tiffany, used on items as disparate as Tiffany & Co. jewelry and artificial Christmas trees, is significantly less unique.

But even uncommon names can run into trouble if the space is already occupied. Kylie Jenner, the youngest Kardashian sister, lost a recent battle to trademark her first name as it relates to advertising services. A representative of Australian singer Kylie Minogue contested the application, arguing it would confuse consumers and dilute Minogue's brand. The musician has operated Kylie.com since 1998 and owns numerous trademarks involving the name, including "Kylie" for entertainment and music.

But unlike the two Kylies, for now there's just one Ivanka. And she isn't just looking to protect her name. She's also taken steps to trademark #WomenWhoWork, a personal lifestyle initiative and the title of her next book. Even further afield, her licensing company has trademarked two versions of her oldest son's name, Joseph Frederick Kushner, to use on clothes and accessories.

Indeed, in a weird twist of Trump family dynamics, the person who could pose the biggest obstacle to Ivanka's trademark strategy is her own mother. Ivana Trump, Donald Trump's first wife, was one of the first in the family to brand herself. She owns trademarks for "Ivana" in connection with wine, eyeglasses and jewelry, along with IvanaTrump.com. And the name Ivana looks and sounds a lot like Ivanka -- an important point when it comes to blocking a trademark application.

But it's not her mother she has to worry about. China has emerged as Ivanka Trump's biggest intellectual property nemesis. Ivanka Trump, the person, is adored in China. Many see her as smart, beautiful and hardworking -- and without the political overtones that make her so controversial in America. Businesses have filed at least 250 trademark applications to use the local language version of Ivanka on products such as diapers and bottled water.

Historically, China provided little protection for intellectual property. But Trump's company may soon be the beneficiary of nascent efforts to crack down on profiteers. Starting in March, provisions approved by China's Supreme People's Court took effect, aiming to protect famous people like her. So far, Ivanka Trump Marks LLC has filed more than 50 applications for trademarks on variations of her name in both English and Chinese. And earlier this month, on the same day she and Kushner sat down to dine with the president of China at Mar-a-Lago, the Chinese government granted her company three new trademarks for jewelry, bags and spa services.

"She's got a very large opportunity with the Chinese consumer," said Brian Buchwald, chief executive of Bomoda, a consumer intelligence company that focuses on China. But he doubts Ivanka can rely solely on her first name to win over that market. For that, she may still need the brand her father built.

"It's the Trump name that adds glamour," he said.